The history of the Philippines is limited mainly to the time after the country was colonized by Europeans in the 16th century, as there is little historical source material for knowledge of the time before this.

The Philippines was populated from the mainland in the Stone Age. From the 8th century AD, Chinese seafarers visited the islands, but in the 15th century Muslims pushed back the Chinese influence. In the 16th century, the Philippines became subordinate to Spain, and the archipelago was named after the Spanish king Philip II. 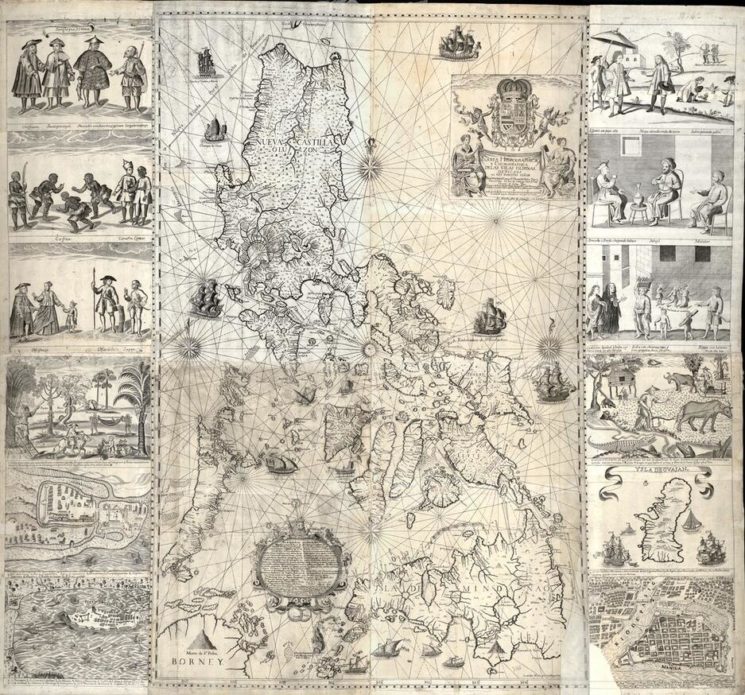 The historical source material from before the colonial period in the Philippines is very limited. However, it is known that the islands had commercial relations with other countries long before the first contact with the West. Trade with China probably began in the 8th century, later with countries in Southeast Asia. In the 15th century, Islam gained a foothold in the Philippines, especially in the south, and needed the Chinese influence back.

When the Spaniards came to the islands, they found a culture characterized by Chinese, Indian and Arab culture. In 1521 came the first European explorer, Fernão de Magalhães, who called the archipelago of the St. Lazarus Islands. It was not until 1565 that the Spaniards began to take possession of the islands and named them after Philip 2.

In the 1600s, the Philippines was repeatedly attacked by Dutch and Englishmen. During the Prussian Seven Year War, the important center of Manila was conquered by the English, but was returned to Spain by the Paris peace in 1763.

The Spanish dominion penetrated the interior of the islands late, but the majority of the population eventually came under Catholic and European influence. However, the Spaniards never really got control of the Islamic regions of the south, Mindanao and the Sulu Islands.

In the 1800s, frequent revolts took place, most notably led by Emilio Aguinaldo in 1896. In 1897, the rebellion was cured, but during the Spanish-American War, Admiral George Dewey destroyed the weak Spanish fleet and took Manila in 1898. Aguinaldo then sought, with American support, to form an independent, federal republic. At the Paris peace in 1898, the Philippines was surrendered to the United States for $ 20 million.

The Republic of the Philippines was proclaimed January 23, 1899 with Aguinaldo as president. Soon there was a war between the new Republican army and American occupation soldiers. When Aguinaldo was captured in 1901, the war erupted. The resistance movement Katipunan kept going with scattered guerrillas, and for many years the Americans held a greater troop strength on the islands.

The Philippines was now ruled as an American colony and came under US customs territory. Large plantations were established, especially for sugar, which were sold to the United States. In 1907, the islands got their own constitution with partial autonomy. A new constitution was given by the Congress in Washington in 1916; self-government was further expanded, and a parliament created, elected by the Philippines’ own inhabitants. In the 1920s, there were sharp conflicts between the United States Governor-General and Parliament, and the constitution was long suspended. 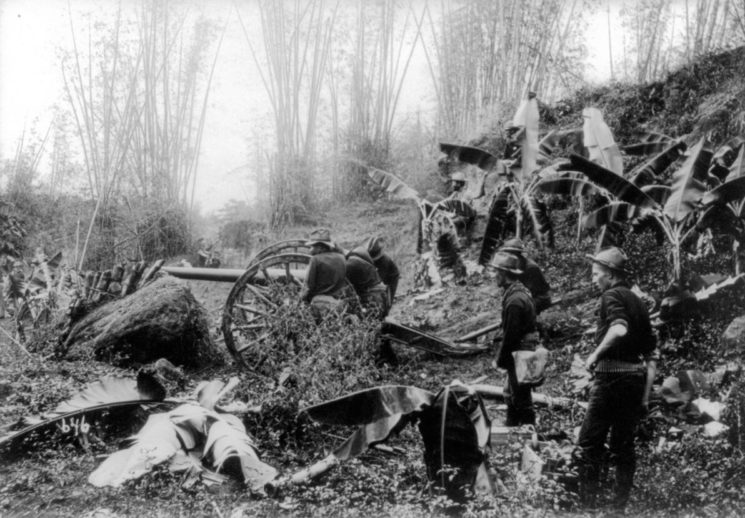 In 1927 Henry L. Stimson became Governor-General; he pursued a more conciliatory policy and sought cooperation with Filipino leaders. In 1934, Congress passed a law of independence: After a ten-year transition period, the Philippines was to become fully independent, but in the meantime, the United States retained control of the state budget, defense and foreign policy.

In 1935, the leader of the Nationalist Party, Manuel Quezon, was elected the first president of the Philippines. In the United States, relations with the Philippines became a political issue. The “isolationists” in the West and sugar stakeholders in Cuba and the US wanted Americans to pull out. Export trade, US financial interests in the Philippines, and circles thinking of Japanese danger and US prestige in the East, on the other hand, would keep the islands.

The Japanese conquered the Philippines in 1941–42. After bloody fighting, the Americans regained the archipelago in 1944–45, and on July 4, 1946, the Philippines became an independent state.

A 99-year alliance treaty from 1947 gave Americans the right to air and naval bases on the islands. The Philippines gained several political parties, with the nationalists and the Liberal Party dominating. At the independence of 1946, Liberal Manuel Roxas was elected President; after his death in 1948, Vice President Elpidio Quirino took over. Guerrilla forces from the Communist Hukbalahap movement, which had been operating against the Japanese during the occupation, were active, especially on the island of Luzon.

Ramon Magsaysay won an overwhelming victory in the 1953 presidential election. It succeeded in directing decisive blows against the Communist guerrilla, the leader surrendered in 1954 after the Politburo was previously captured. In 1954, the Philippines participated in the establishment of the Southeast Asian Defense Alliance (SEATO). Magsaysay perished in 1957 and was followed by Carlos P. Garcia. Relationships with the United States have been relatively cool at times, especially because of frictions about Americans’ access to military bases in the Philippines.

In the 1965 and 1969 presidential elections, Nationalist Party candidate Ferdinand Marcos, who claimed to be the country’s most decorated war participant from World War II, prevailed. In 1972 he declared military state of emergency, the first since the independence of the Philippines. The rationale was an alleged conspiracy against his regime. Up to 1977, 30,000 of Marcos’ political opponents were arrested, including the leader of the Liberal Party, Senator Benigno Aquino. A new constitution in 1973 gave the president almost unanimous power.

The state of emergency lasted until 1981 and was characterized by Marcos’ personal exercise of power as president, prime minister and military commander. The National Assembly regained its legislative authority in 1981, but Marcos retained the right to govern himself by decree. 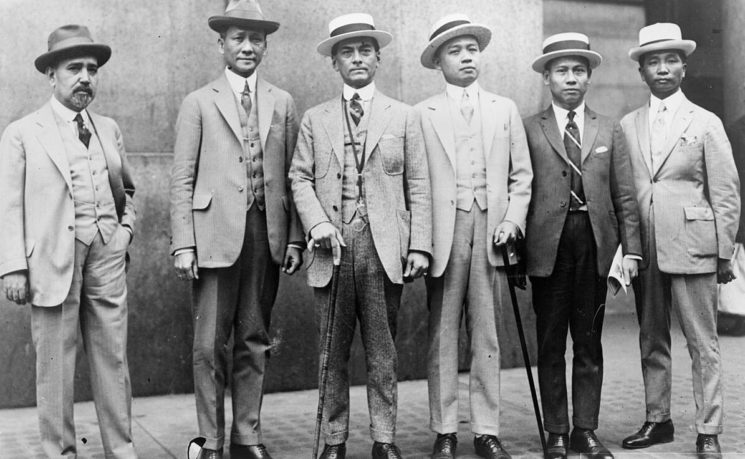 In 1981, Marcos was re-elected as President for another six years. Opposition leader Benigno Aquino, who had been in exile in the United States since 1980, was shot and killed on his return to Manila on August 23, 1983. The killing led to sustained waves of protest and activation of the opposition. Corazón Aquino, the widow of the murdered, posed as the opposition’s presidential candidate in the 1986 election. Marcos proclaimed victory lord. Extensive electoral fraud was revealed; this gave rise to a soldier mutiny, which under the slogan People’s Power received massive support from millions of Marcos opponents. Chief of Defense Fidel Ramos and Secretary of Defense Juan Ponce Enrile joined the rebellion, and on February 25, Marcos had to go into exile to Hawaii, where he died in 1989.

Corazón Aquino became president and a new democratic constitution was adopted in 1987. During his presidency, Aquino was subjected to seven armed coup attempts, most from a right-wing officer group. The government was characterized by factional strife, and a failed attempt at land reform weakened Aquino’s position. In the May 1992 presidential election, Fidel Ramos, who had been Aquino’s defense minister, triumphed with 23.6 percent of the vote. Ramos toned down his military background and appointed a government of civilians only.

While neighboring countries were making rapid economic progress, developments in the Philippines had been virtually stagnant since the 1960s. Around 1990, the economy stagnated completely. The Ramos government seemed to have reversed the trend and, throughout the 1990s, could point to increasing growth in gross domestic product (GDP). The most important currency source was five million Filipinos who were registered as guest workers abroad. Ramos continued the deregulation of the economy that Aquino had begun. Special frisons for foreign companies were established. In 1993, the death penalty was reintroduced for certain crimes.

Conflict between Christians and Muslims

Since around 1970, one of the main problems of the Philippines has been an armed conflict between Christians and Muslims in the southern part of the country. Until a preliminary peace agreement in 1996, tens of thousands had been killed. The prehistory goes all the way back to the Spanish government. Hostilities flared up again in the 1970s after a large influx of Catholic settlers into Muslim areas, especially in Mindanao. Disputes over land ownership led to bloody clashes. Muslims formed in 1968 the Moro National Liberation Front (MNLF) movement ; the Christians responded with their own militia groups.

In 1971, government troops were sent into the turmoil to fight the MNLF. The battle eventually took the form of a revolt against the Manila government. Until 1987, the MNLF as its stated goal was to make the traditionally Islamic districts a separate Muslim state, detached from the Philippines. Repeated attempts at negotiations failed. In 1993, MNLF leader Nur Misuari returned from a long-standing exile in Libya. In June 1996, a possible breakthrough came after 25 years of struggle: A temporary agreement for the establishment of a regional council for 14 southern provinces, with the MNLF in the majority position. 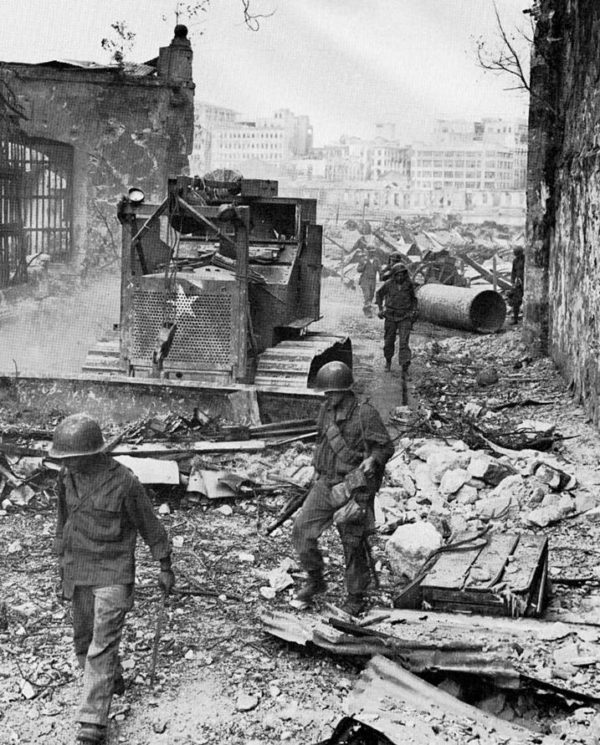 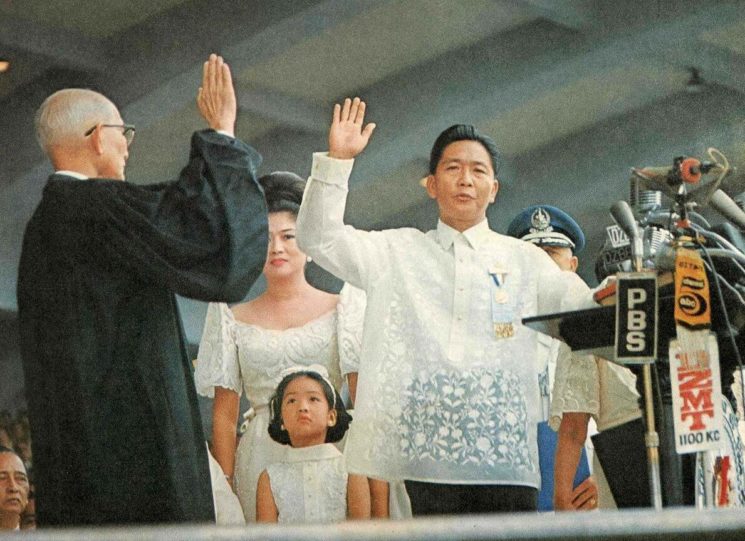 Ferdinand Marcos swears oath as President after he was re-elected in 1969. He was President of the Philippines from 1965 to 1986.

The guerrillas showed a markedly decreasing tendency in the 1990s. The NPA should be reduced from about 25,000 men under arms in the mid-1980s to about 5,000 after the turn of the millennium. In 1992, the 1957 Anti-Terrorist Act was repealed and the Communist Party CPP was legalized, but the party was weakened by factional battles. Like its predecessor Ramos, Arroyo has tried to get the NPA militia to lay down their weapons. Since Norway was asked to be a technical facilitator for the peace efforts in 2001, a number of rounds of negotiations have been held in Oslo. 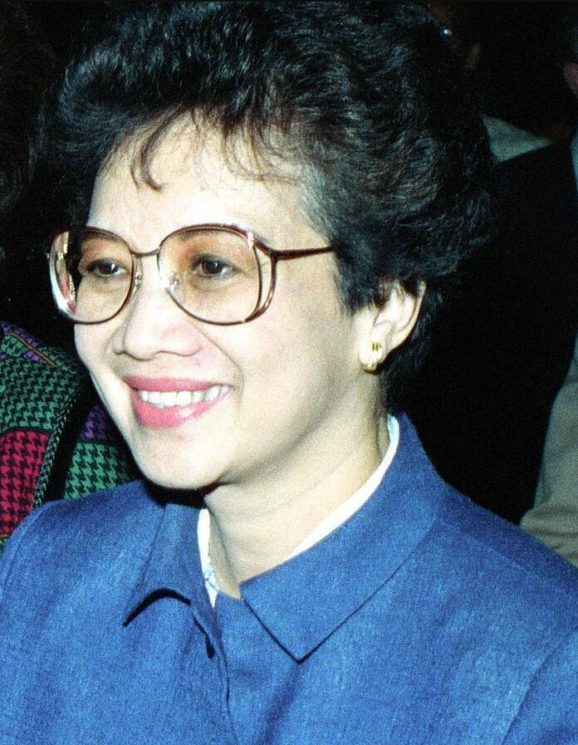 One separatist group that became more active in the second half of the 1990s was Abu Sayyaf, “the father of the sword,” the most extreme of several Islamic groups in the southern Philippines. Abu Sayyaf attracted international attention through several kidnapping actions and killings of foreigners. In April 2000, they abducted 21 people, mostly European tourists, from the holiday island of Sipadan in Malaysia. Massive deployment of army forces for a number of years in 2004 seemed to have reduced Abu Sayyaf to a hard core of a few hundred guerrilla warriors.