Cyprus has a number of monuments from ancient times. The ancient city of Kition, which is mostly under today’s Larnax (Larnaca), was founded around 1200 BC. The city ruins include of an ancient Cyclopean wall, the great Astarte temple and four small temples. The ruins of the great Aphrodite temple in Paleopafos (Ancient Paphos), at present Kuklia, were erected in the period 1100 BC – 300 AD.

Unique mosaic floors are found in the Roman villa of Dionysos; fine mosaics also in Thesev’s house, both in Paphos, near Ktima. In Kourion, 12 km west of Limassol (Lemesós) stands ruins of amphitheater, basilica, forum, stadium, Gladiator’s house, Akhillevs’ house and Apollon’s shrine, most erected in the 100th century AD.

The country has churches from different eras and arts associated with these. The Byzantine Church of Panayia Kyra at Livadia, Panayia Angeloktistos of Kiti and Nicodemus’ Chapel at Salamis have fine mosaic and fresco decorations from the time before the iconoclasm (726-843). Panayia Porviotissa in Asinou (16 km northeast of Kakopetria) contains outstanding frescoes. The Panayiatou Arakou Church (16 km southeast of Kakopetria) has frescoes dating back to the 11th century. a famous representation of Christ the Pantocrator.

The Troodos area is rich in historic churches; small churches with steep saddle roofs, interior decorated with frescoes. They are mainly built for two periods from the 1100s and the 1200s to the 1400s, when the island came under the Venetians. 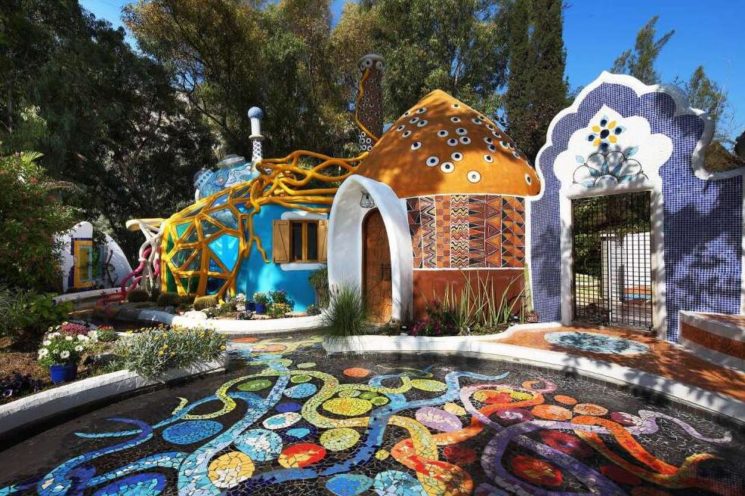 In the 13th and 14th centuries, Gothic-style churches, monasteries and chapels were built, e.g. Sofia Cathedral in Levkosia, Nicholas Cathedral in Gazimağusa (Famagusta), the Monastery of Bellapais and the Royal Chapel of Pyrga.

Cyprus is rich in portable icons; especially beautiful are the icons of the Frankish and Venetian period. They are either painted in a strict Byzantine or in a more western influenced style. After the conquest of the Turks in 1571, the icon painting expired.

The Lazarus church in Larnax, built over the saint’s tomb, was originally erected in the 8th century and has been rebuilt several times. The church tower was erected in 1857. Examples of Islamic architecture can be found in the Hala Sultan Tekke Mosque at Larnax, begun 650 AD, rebuilt in 1816, and the Dragoman’s house in Levkosia from the early 1800s.

An independent Cypriot art was developed in the 20th century, inspired by Western European art. After the Turkish troops march in 1974, much of the art gained a political-national profile. Numerous are the paintings, busts and statues of Archbishop Makarios 3, e.g. the colossal statue in front of the new Archbishop’s Palace in Levkosia. Another group of artists, linked to the so-called Apophasi movement, named after a 1960s gallery, creates less politically engaged art.

Recent monumental architecture is characterized by traditional building forms, e.g. the Archbishop’s Palace and the new Presidential Palace in Levkosia from 1978.