The music traditions are characterized by Islamic culture. The forms and instruments of art music reflect Arabic theory and performance practice. The folk song (caravan songs, welcome songs, lyrical songs in strophic form with chorus, etc.) is performed soloist and in alternation between groups or between songs and groups. Many songs include clapping and dancing. On festive occasions, poet musicians entertain with epic songs. Of folk instruments, there are surnay (scallop), jirba (bagpipe), ‘ud (lute), darabukka (vase-shaped single-drum), rabābah (one-string fiddle) and zummāra (double clarinet); fishermen use conch horns.

Art and architecture in Yemen

Yemen’s most distinctive contribution to art history can be found in the local architecture.

The houses in San’a are kept in a traditional style, such as stone houses (built in stone and clay) with four to nine floors, designed for one family. They contain many small rooms, have strong exterior walls and often a meeting room at the top. The walls are decorated with geometric patterns.

In Sa’da and surrounding villages there are remarkable houses built of straw and clay. These are also decorated with white lime and have roof terraces. In Shibam there are more than 500 tower houses, four to eight stories high, in a limited area. Most of the houses are from the 17th century, and a number of houses were rebuilt in the 19th century. From 1984, UNESCO became associated with conservation work, including in the cities of San’a and Shibam. 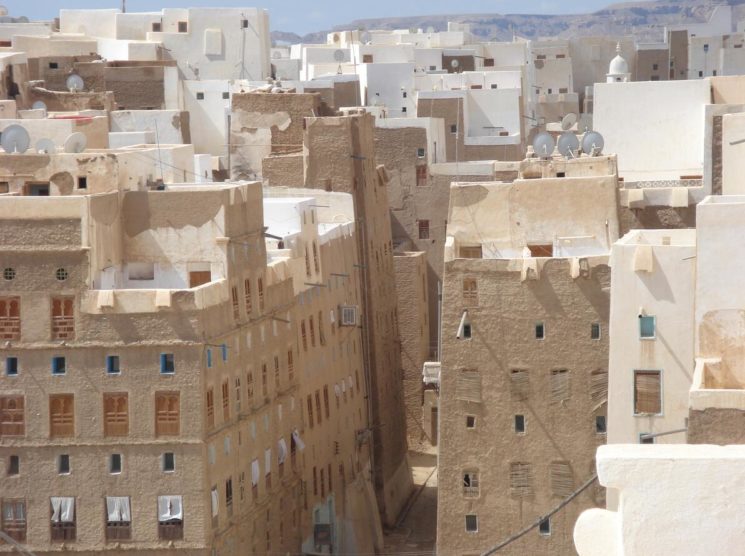 Yemen’s culture has deep roots, and among other things, the country’s poetry is well regarded in the Arab world. Internationally, the classic, unique architecture is best known. This one, including in the capital San’a, where many houses are kept in a traditionally bound style, has roots more than two thousand years back. These include richly decorated tower houses built of stone and clay or straw and clay, with four to nine floors, designed for one family. San’a, as well as the smaller cities of Zabïd and Shibam, are particularly renowned for their architecture, and are on UNESCO’s World Heritage List. Equally, much of this cultural heritage has been destroyed as a result of the war, mainly due to aerial bombing.

Yemen has officially compulsory nine-year schooling from the age of six; the high school is three years old. The schooling does not embrace everyone; especially many girls fall outside. It is estimated that around 85 percent of all men, and about 55 percent of women, can read and write. There are several public and private universities, all from recent times: The University of San’a was established in 1970; University of Aden in 1975. Like other social sectors, the cultural and educational sectors are severely injured by the war.