The Middle East denotes a geographically vaguely defined area with a common cultural frame of reference. The core area of ​​the Middle East consists of the countries from Libya to the Gulf of Persia. This includes Egypt, Iraq, Israel, Jordan, Lebanon, Libya, Syria and the Palestinian Authority. In addition, the countries of the Arabian Peninsula. This includes Bahrain, United Arab Emirates, Kuwait, Oman, Qatar, Saudi Arabia and Yemen.

The Middle East conflict is the term most commonly used to describe the controversy over the former Palestine mandate, which was divided in 1948 as a result of the establishment of the State of Israel. Although the core of the conflict is between Israel and the Palestinians, it quickly received regional ramifications.

A number of conflict lines exist in the Middle East as a region, and the conflict has local, regional and global dimensions. The conflict became one of the biggest challenges for the newly established UN. The conflict still has great political explosiveness that threatens new wars in the region. 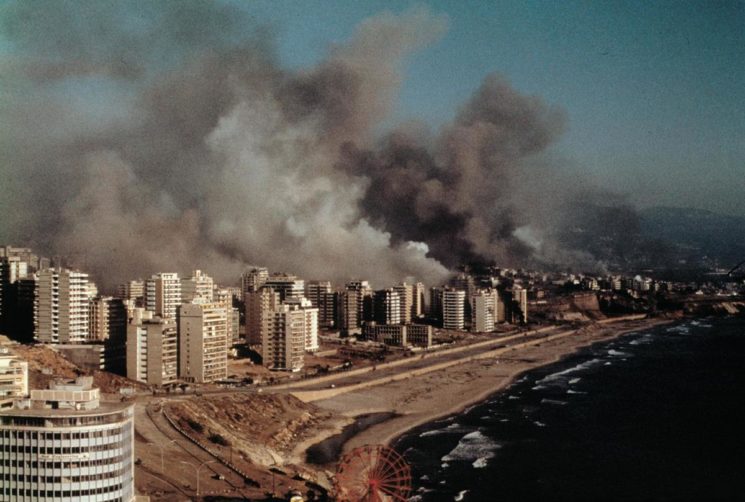 Israel has had a conflicting relationship with both its Palestinian residents and neighboring states. Violent actions and wars have been recurring elements in the area. Around 1980, the PLO had its main bases in Lebanon, and in 1982 Israel invaded the country. The picture shows West Beirut being bombed by Israeli aircraft and artillery positions in August this year.

The local dimension ( Palestine question ) is at the heart of the Middle East conflict. It consists of the ongoing struggle over the territory of Palestine and the moral, historical and international law demands to settle and establish state formation in what until 1947 was a British mandate.

Even before Israel was established on May 14, 1948, there were military confrontations in the area, between Jews and Palestinians, Jews and Britons, as well as between Palestinians and Britons.

The local conflict dimension has changed over the years. Initially, it was mostly about whether a Jewish state should have the right to exist in the area at all, to a great extent to displace the Palestinians.

As Israel’s existence was accepted politically, gradually also at Arab and Palestinian levels, the conflict at the local level has mostly become a question of the Palestinian people’s equal right to an independent state. This solution, the two-state solution, involves one Jewish and one Palestinian state side by side, as the UN’s sharing plan provided, but with different boundaries.

Among other things, as a result of the Oslo agreement, the solution has been accepted, including by Israel, but further negotiations have not proceeded. The Palestinians’ foremost representatives, first the Palestinian Liberation Organization ( PLO ), then the Palestinian Authority, have supported the two-state solution. Other groups, such as Hamas, have rejected it. The same has militant opponents in Israel, who will not give up control of the West Bank.

Israel’s demand for security is a core concern. Another is to maintain settlements in the West Bank. These are established in violation of international law, and further reduce – and break up – the territory of a Palestinian state. From the Palestinian side, the refugees’ right to return and the question of the status of Jerusalem in particular are central.

The regional dimension, that is, the Arab-Israeli conflict, is also a direct consequence of the 1947 United Nations Partition Plan, with the establishment of the State of Israel in 1948. The Arab neighboring countries opposed the plan. This created a military and political confrontation line between Israel and the Arab neighboring states. This led to widespread tension and to four Arab-Israeli wars – 1948-9, 1956, 1967 and 1973 – as well as Israeli warfare in Lebanon and to terrorism by several parties.

Although Israel has always been numerically inferior, the country has been militarily superior, winning the four Arab-Israeli wars (1948, 1956, 1967, 1973 ).

In the regional military conflict, especially Israel and its neighboring countries Egypt, Jordan and Syria, have been involved. Also Iraq and Lebanon have participated, but to a lesser degree. Other countries have contributed more symbolically, as well as most financially, with support for the states that have gone to military combat against Israel.

Several states have supported the Palestinian liberation movement – political, economic and military – from the start of its resistance struggle in the 1960s. Palestinian groups in several countries, as well as non-state actors, especially in Lebanon, are the second category of actors in the regional conflict.

After the first Arab-Israeli war in 1948, armistice agreements were signed in 1949 between Israel and Egypt, Jordan, Lebanon and Syria respectively. After the October war in 1973, Egypt embarked on a new political line, becoming in 1979 the first Arab state to enter into a peace treaty with Israel; followed by Jordan in 1994. Peace talks were also conducted with Syria, without reaching an agreement. 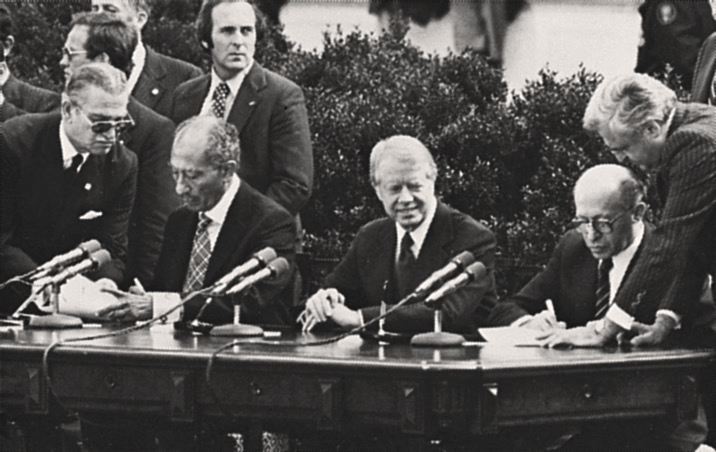 The global dimension of the Middle East conflict was already created through the UN’s treatment of the future of Palestine and the decision to divide the mandate into one Arab and one Jewish state in 1947. Secondly, the issue was internationalized through the involvement of various countries – political and military, direct and indirect. – in the conflict as such and in the wars it caused.

The UN has been a key premise for the conflict, both through several important resolutions, in particular Resolution 242, and by establishing several peace operations in the region, five of which originated in the Palestine issue. As early as 1948, the United Nations established the UNTSO Observer Corps, including UNEF (Gaza, Sinai, 1956), UNEF II (Sinai, 1973), UNDOF (Golan, 1974). The UN has also been involved in other areas, including through its own Palestine Refugee Relief Organization (UNRWA).

The United States, as a superpower and Israel’s closest allies, has been the heaviest party in a series of attempts to find a political solution. Until the beginning of the 1990s, these attempts were mainly to resolve the conflicts between Israel and the Arab states, but from about 1990 the Israel-Palestine issue also arose in the negotiations.

In 1993, Norwegian diplomacy managed to bring the parties together in negotiations that led to the first formal agreements between Israel and the PLO, supported by the United States. These led to the establishment of Palestinian autonomy in Gaza and the West Bank, as a starting point for a Palestinian state. The Oslo agreements were the basis for a further peace process, which however stopped. Several key issues remained unresolved, and the agreements met with considerable opposition both in Israel, among the Palestinians and in the rest of the Arab world. Tensions between Israel and the Palestinian Authority have led to a renewed high level of conflict, especially from the end of the 1990s.

With global relaxation following the end of the Cold War, with a bilateral approach between some Arab states and Israel, as well as the establishment of Palestinian autonomy, the regional dimension of the 1990s conflict has become smaller and the local dimension all the more prominent.

Central to this work is UN Resolution 242 of 1967, which calls for a lasting peace in which every state in the area should be able to live in peace, an Israeli withdrawal from territories occupied during the Six Day War, and a solution to the refugee issue. Israel did not reject the resolution, but maintained the demand for direct, bilateral peace talks with its neighboring countries.

In 1977, US President Jimmy Carter signaled America’s willingness to accept a Palestinian “homeland” in Palestine. The United States and the USSR issued a joint statement calling for a solution to the conflict that secured “the legitimate rights of the Palestinians”. This involved a twist of US politics, but did not come about when Likud won the Israeli election in 1977, and Prime Minister Menachem Begin rejected any dialogue with the PLO or the idea of ​​a Palestinian state.

Nevertheless, Begin was in dialogue with Egyptian President Anwar al-Sadat. With Carter as an intermediary, the first step toward peace, through the Camp David Agreement, was taken: The Israel-Egypt Peace Agreement, the first between an Arab state and Israel, was signed in 1979.

In 1982, US President Ronald Reagan proposed a plan to surrender the occupied Arab territories – without establishing a Palestinian state of its own. The proposal was a Jordanian-Palestinian federation. In the same year, Arab states presented a plan for the formation of a Palestinian state in the occupied territories, which simultaneously implicitly recognized Israel’s right to exist within the borders from before 1967. In 1985, Jordan’s King Hussein and PLO leader Yasir Arafat signed an agreement which was to secure Palestinian autonomy within a Jordanian-Palestinian federation. The diplomatic support of the late 1980s did not materialize.

On October 30, 1991, the first peace conference on the Middle East opened in Madrid, with participation from Israel and the Arab neighboring states as well as Palestinian representatives. The conference marked the beginning of a longer process, in which the most central part consisted of bilateral meetings between Israel and Jordan, Lebanon and Syria respectively.

Israel did not agree to negotiate directly with the PLO, but so-called independent Palestinian representatives participated in the Jordanian delegation. There was considerable political controversy about participation within the PLO, but the organization’s weakened position resulted in the endorsement of the negotiations even though the PLO was banned.

The Madrid process succeeded in bringing representatives of the parties together, but the meetings between Israelis and Palestinians did not go far. Instead, Israel and the PLO started parallel discussions, which for the first time brought together official representatives. From January 1993, a series of secret meetings were held in Norway. The Oslo Canal led to a declaration of principles signed in Washington on September 13, 1993.

Central to the plan was a gradual withdrawal of Israeli forces from occupied territories, and a simultaneous transfer of control to the Palestinian authorities.

During the Arab summit in Beirut in 2002, Saudi Arabia presented a peace proposal that claimed that Arab states would recognize Israel against Israelis withdrawing from occupied Arab territories. This was rejected by Israel.

Although there have been repeated attempts at peace talks since then, the conflict has effectively stalled. Israel has consolidated its control over the West Bank and the Palestinians have been deeply divided between Fatah and Hamas.