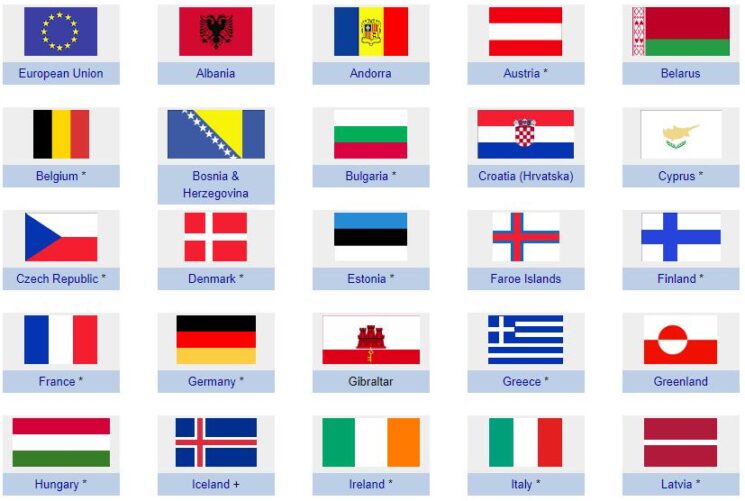 The flag is from 1913, the year after the country’s declaration of independence. The double eagle as a symbol of power in both the east and the west was the former Byzantine Empire’s coat of arms and dates back to the 1460’s and the freedom hero Skanderbeg, who used the symbol. From 1945–92 there was also a Soviet star (in yellow outlines) on the flag cloth above the double eagle.

The flag was last established in 1945, but the origin dates back to 1230; thus, it can be counted as the world’s oldest flags. For over 500 years, however, it was a flag for the Habsburg House, which ruled Austria from 1273, only to become the national flag in 1786.

The flag was introduced in May 1995 and is the same as that applied to the Belarusian Soviet Republic in 1951–91 with the difference that the communist emblem (hammer and cutter) was removed. The vertical field shows a characteristic national textile pattern. From 1991-95, the flag had three equally wide, horizontal fields in white-red-white (colors of state arms with tradition from the 1400’s).

As the smallest country in Europe listed on Countryaah, the Vatican City State has the flag that was established as a state flag in 1929 but became the flag of the papal chair as early as 1808. The colors yellow and white correspond to the gold and silver of the papal weapon. The Pope’s emblem (since the 13th century) is made up of the tiaran and the “keys of the kingdom of heaven” (one of gold, one of silver) which also symbolize the spiritual and worldly supremacy of the pope.

The flag was last established in 1990. The red-white-green color scheme has been tradition since the 1400’s. In its current design with three horizontal fields, it began to be used in 1848. There is a variant of the flag with the central coat of arms in the middle which, unlike the regulations in other countries, may also be used by individual citizens. It has in the white middle field the coat of arms of the state coat of arms, crowned with the Stefanskronan (“Kossuthvapnet”) that was inserted in the flag in 1848, was abolished in 1949 but officially reintroduced in 1990. Both versions of the flag occur in parallel.

The flag was adopted in 1991. The blue-yellow colors, with tradition from the fighting against the Mongols in the 13th century, were revived by the independence movement in 1848 and officially carried on during the country’s independence in 1917-20. In popular interpretation, blue stands for the sky and yellow for the wheat fields.

The flag was adopted in 1949. The color combination black-red-yellow became the national symbol in the fight against Napoleon 1813–15, set in 1848 for the flag of the German Confederation, replaced in 1871 by the imperial black-white-red (introduced in 1867). The Weimar Republic reintroduced in 1919 the black-red-yellow flag; it was abolished again in 1933, then in favor of the Nazi hawk flag, which applied until 1945.

The flag is the same as the former Czechoslovakian flag, which was taken over unchanged when the new state was formed in 1993. Red and white are the core countries of Bohemia.

The flag has its origins in the design that the Great Weapon was given in 1448 by Karl Knutsson (Farmer). The oldest pictorial documentation is from 1557. The current flag law was adopted in 1982. See flag (Swedish flag).

The flag, “Union Jack”, is a compilation of three older flags: England with red Georgia cross on white bottom, Scotland with white andrea cross (diagonal cross) in dark blue and Ireland with red andrea cross in white. The latter cross should be irregularly placed in the Scottish Cross – a heraldic finesse to avoid the perception that Ireland’s cross is overlaid on Scotland. This design has had the flag since 1801, although Ireland is now not part of the Union. The origins of the separate flags are considerably older and date back to the 12th and 13th centuries.

There are three additional British flags: Red Ensign (trade flag), Blue Ensign (state civil service flag) and White Ensign (naval flag). Red Ensign has red cloth with Union Jack in the upper inner corner; Blue Ensign has a similar pattern on dark blue cloth. White Ensign consists of a white cloth with a red Georgia cross (the flag of England) and Union Jack in the upper left lane; it may only be carried by naval vessels. Ordinary national flag is used as a country flag on land.

The flag was officially established in 1936, but its origins go back to 1785. The colors yellow and red have an old tradition from the arms of the kingdoms of Castile, León and Aragon, created in the 13th century. The flag appears both with and without government arms.

The flag was introduced in 1992. It dates back to the revolution year 1848. White-blue-red are the so-called Panslavian colors originating in Russia’s flag from 1697. As a state flag in former Yugoslavia, it had a red, five-pointed star from the center in 1947, now replaced by the state coat of arms. shield.

The flag was introduced in 1993. White-blue-red are the so-called Slavic colors, introduced in 1697 in the Russian flag. The Slovak flag has the colors in the same order as the Russian Federation. In addition, in the middle is the coat of arms with a patriarchal cross.

The flag was officially established in 1848 but dates back to 1339, when the Union of Oaths consolidated their independence. As early as the 13th century, the canton Schwyz had a white cross in red on its flag. Characteristic is the square shape of the flag.

The flag has been in use since 1797 but has never been officially established. It has a simple symbolism, where the blue field stands for the sky and the white for the wintertime snow-covered summit of Monte Titano.

The road network covers 290 km. Local transport is provided by buses, and there is also bus service with Rimini. During the summer there are also buses to other coastal resorts and helicopter connection with Rimini.

The current design of the flag dates from 1990, when the Communist state arms were removed. Its origins are from 1848; official character got it in 1859. Until 1867 the fields were horizontal. The color scheme is linked to the country’s oldest parts: Moldova (red-blue) and Valakiet (yellow-blue).

The flag was introduced in 1910 as a replacement for the flag of the former royal regime in blue and white. Green and red are traditional order colors. The object around the national arms is a so-called armillary sphere, an ancient astronomical instrument, here symbolizing Portugal’s efforts in the great geographical exploration voyages of the 14th century.

The flag was officially adopted in 1919; however, it was used illegally since 1831. Red and white have been Poland’s so-called life colors since 1241, ie. the same as in the national arms (where white corresponds to silver). The War Flag has two-tongued canvas with the national weapon embedded in the white field.

The flag got its present design in 1995. The sun with its eight wide rays symbolizes the country’s independence and future faith. The same motif was found in the original flag from 1992, but the sun was considerably smaller and had 16 narrow rays that did not reach the edges of the flag cloth. 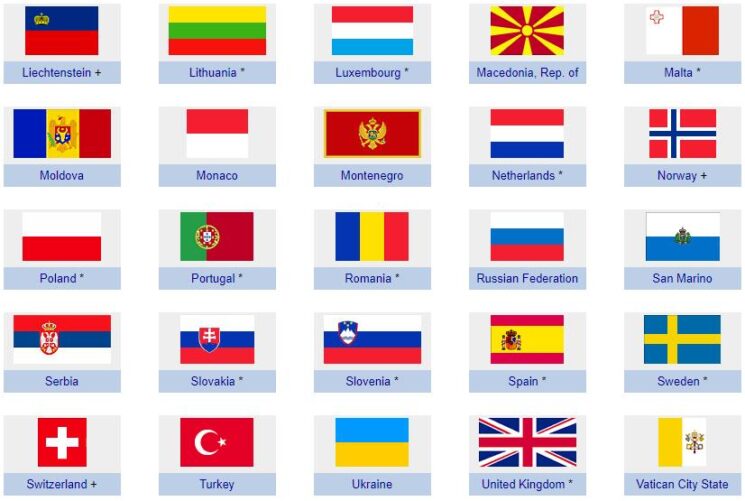