Cyprus has been permanently settled since around 4500 BCE. Findings from the Bronze Age (c. 1600–1050 BCE) testify to trade in, among others, Crete, Anatolia, Syria and Egypt. After about 1200 BCE. Greek settlement took place and six Greek kingdoms were established. Cyprus became a cultural and economic center in the Mediterranean.

Cyprus was ruled by the Phoenicians, Assyrians, Egyptians and Persians to Alexander the Great conquered island in 333 BCE. In 295 BCE. Cyprus came under the Ptolemies, who ruled the island until it became a Roman province in 58 BCE.

Following the division of the Roman Empire in 395 AD, Cyprus became part of the Eastern Roman Empire ( Byzantium ). During the Crusades, Cyprus was conquered by Richard 1 of England in 1191 and was a crusader kingdom until 1489, when the island came under Venetian rule. The Ottoman Empire conquered Cyprus in 1571.

In 1950, the church’s unofficial referendum among Greek Cypriots provided a majority for accession to Greece, but this was rejected by the British. The Greek Cypriots started an armed struggle against British rule in April 1955, led by the organization EOKA in collaboration with the Cypriot Church. The campaign had broad support in the Greek Cypriot population, and schoolchildren and scouts were actively recruited. The fighting started with attacks on buildings and equipment, but quickly evolved to include the killing of British forces and personnel, as well as their families. When the British deployed Turkish-Cypriot police forces against EOKA, fights between Greek and Turkish Cypriots also arose. A Turkish-Cypriot semi-military force, TMT, was formed in 1958, to organize the defense of villages and towns, and to fight against EOKA. The Turkish Cypriots had long feared violent Greek nationalism and were opposed to Cyprus being incorporated into the state of Greece. 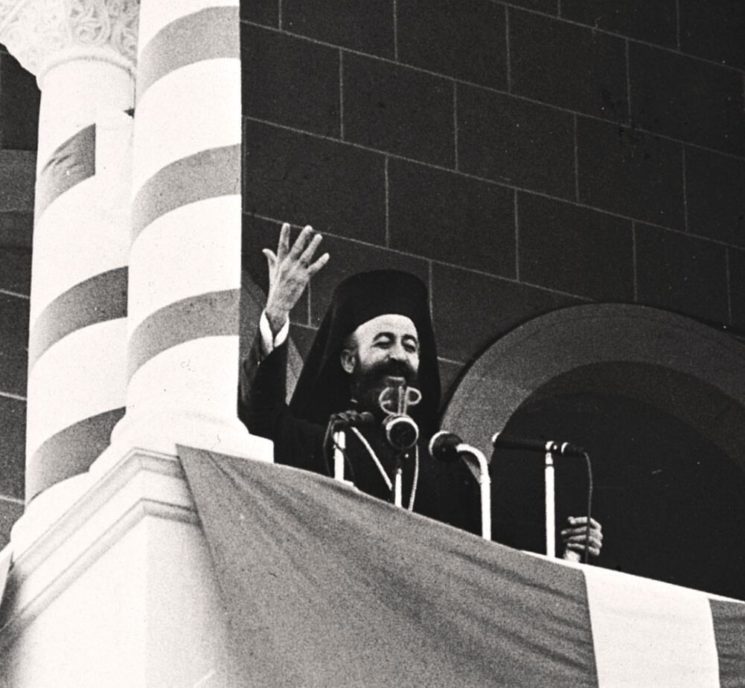 In 1960, Cyprus became an independent republic with Archbishop Makarios as the country’s first president. The picture shows Makarios on the pulpit in 1959.

In 1960, Cyprus became an independent republic, with an ethnic power distribution principle between Greek and Turkish Cypriots right down to the municipal level. The first president was Archbishop Makarios III. Despite independence from the British, most Greek Cypriots were dissatisfied that Cyprus did not become part of Greece, as they had been agitating for decades and fighting militarily for after 1955. The semi-military groups were not dissolved and the tension between Greek Cypriots and Turkish Cypriots continued, despite the fact that they now shared a common republic. Both “mother countries” made sure to smuggle in troops and weapons, and the tension was high.

The Greek Cypriot leadership was dissatisfied with the ethnic power-sharing principle which they felt gave too high representation to the Turkish Cypriots, crippled the state’s operation and was impractical at the local level. President Makarios proposed in 1963 to amend the Constitution so that this principle of power distribution was removed at various levels. The Turkish-Cypriot politicians thought this meant a clear breach of the central ethnic power-sharing premise of the Common Republic, and did not trust the Greek Cypriots’ intentions. They withdrew from the government and parliament in protest, and in their absence the Greek Cypriot MPs adopted the amendments to the constitution. They demanded that the Turkish Cypriots accept the changes in order to return to parliament. The Austrian President of the Constitutional Court (an independent institution to guard the Constitution) declared that this was unconstitutional, and thus invalid. Thus, paradoxically, this is the basis for the legitimate sovereignty of the Republic of Cyprus today.

In Christmas 1963, fighting broke out in several cities and villages, leading to the establishment of a special UN force for Cyprus. UN forces arrived in Cyprus in 1964 and created a “green line” that separated the parties in the capital Nicosia. Struggles and attacks broke out throughout Cyprus, and some 30,000 Turkish Cypriots fled to armed enclaves, most of them living in miserable conditions for ten years, especially because they were exposed to the almost complete blockade of supplies. This also led to an almost complete dependence on emergency aid and supplies from Turkey, and the Turkish Cypriot paramilitary organization TMT (see above) gained great power, in close cooperation with Turkish civilian and military forces. Greece and the Greek military had always been strongly present in the Greek Cypriot community. Most of the villages were either split in half or emptied of Turkish Cypriots. In many cases, mosques were bombed and all Turkish-Cypriot houses burned down. The Greek Cypriots regarded the enclaves as Turkish nationalists and separatists. In practice, the Greek Cypriots thus took control of the entire state and the economy. 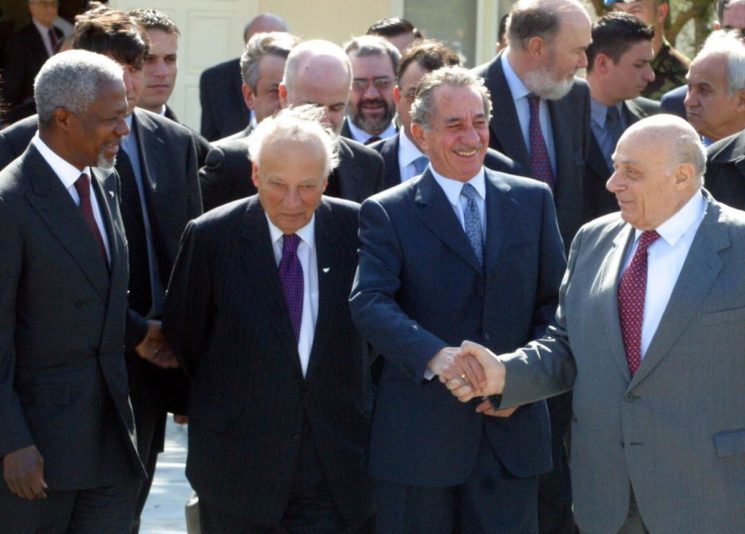 The right-wing militant group EOKA B (established in 1971 by the paramilitary hero Georgios Grivas) was supported by the military junta in Athens. They were dissatisfied with Makarios, who they felt was too moderate, and after several attempted assaults carried out a coup in July 1974. Nikos Sampson (1935-2001), former EOKA man, journalist and politician, was appointed president. However, the coup led Turkey to intervene militarily shortly after, occupying the northern part of the island.

Here, the Turkish federal state of Cyprus was declared the following year. 160,000 Greek Cypriots fled south and 60,000 Turkish Cypriots fled north. Following this refugee flow, the state of Cyprus (the Greek Cypriot section) was the only recipient of international aid, because it was the only internationally recognized authority. In 1983, the Turkish part declared an independent republic by the name of the Turkish Republic of Northern Cyprus. The Turkish Cypriot community has struggled financially because the unrecognized state has been the subject of an international boycott, and it has been entirely dependent on assistance from Turkey, which has contributed about 75 percent of the annual state budget. Repeated attempts at mediation have failed to unite the two parts of the island.

In 2003, the border between the two existing states was opened to citizens of both parties and tourists. However, Turkish Cypriots with a parent who has come from Turkey cannot pass to the other side. Nor is it possible for tourists to enter the Greek Cypriot section if they have arrived on the island via the Turkish-Cypriot side, as this is not a recognized state but is considered an occupied territory. 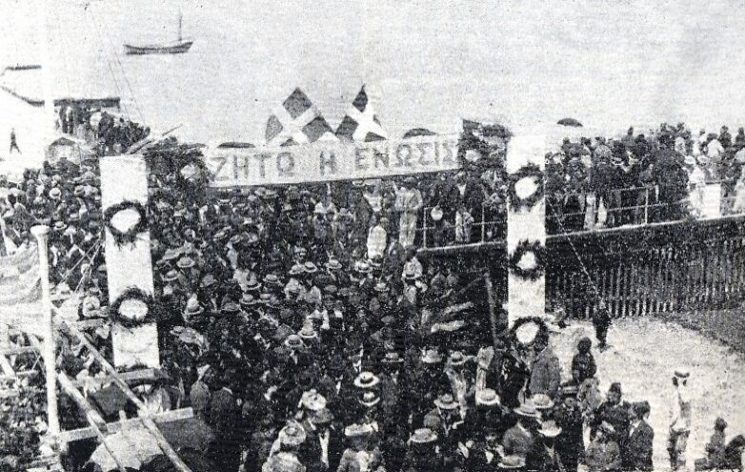 After the EU accepted Cyprus (in practice the Greek Cypriot side) as a new member, in April 2004 a referendum was held in Cyprus on the reunification of the two sides, voting for or against the so-called Annan Plan. This plan proposed a federation of two states, with certain restrictions on the freedom of settlement and movement. 76 percent of Greek Cypriots said no, while 65 percent of Turkish Cypriots said yes. The EU had expected that the referendum would give a yes to reunification, so that a reunited Cyprus would enter the EU. The Greek Cypriot section was instead incorporated, but recognized as the authority of the entire island. Thus, the existing state of the north became officially a Turkish occupied EU territory.

The discovery of oil and gas resources outside Cyprus has again created tension, as the two sides disagree on the sovereignty over the sea areas.