Historically, China’s return to the international scene dates back to an initiative by Mao Zedong. In 1949 he had initially allied with Stalin. At the end of the 1950’s, however, there was an ideological break with the Soviet Union under Khrushchev, which in 1969 even resulted in a small border war.

Since Mao was now afraid of an attack by the Soviet Union, he decided to move closer to the USA. In 1972, after intensive secret negotiations, the establishment of relations between the USA and the PRC was announced by Mao and the US President Nixon. International relations have been continuously expanded under Deng Xiaoping and subsequent management generations. However, since Donald Trump’s presidency began, the relationship between China and the United States has cooled significantly. A complete turnaround in the US strategy for China under the newly elected President Biden is not expected.

The theoretical basis of China’s foreign policy are the “Five Principles of Peaceful Coexistence”, which were formulated in the 1950’s by Mao’s Foreign Minister Zhou Enlai. They demand the mutual recognition of territorial integrity and sovereignty, non-aggression, non-interference in the internal affairs of the other, equality and cooperation for mutual benefit as well as peaceful coexistence.

The core of China’s foreign policy is, on the one hand, the strengthening of its economic relationships to expand and develop sales and raw material markets. On the other hand, China is also using its increasing position of power to assert political claims. China is also demonstrating its new foreign policy strength in the trade dispute with the USA. At the same time, China plays an important role in the Korean conflict.

Important examples of this are the territorial disputes with neighboring countries over various sea areas. This includes on the one hand the dispute with Japan over the Senkaku Islands, but above all the claims on the Spratly Islands and the associated sea areas. This creates tension with a number of countries, such as the Philippines, Vietnam and Taiwan. Unimpressed by this, the People’s Republic of China began to occupy a number of islands and build ports and runways there. 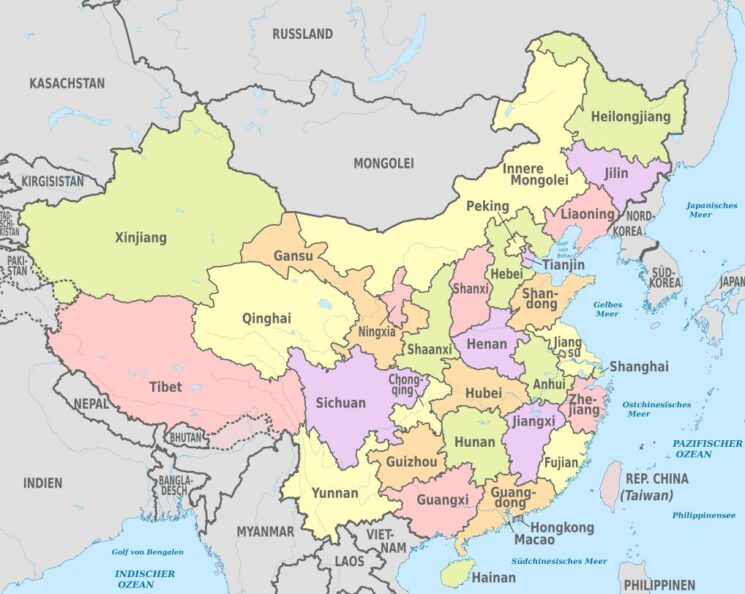 The first contacts of people from the German area with the Chinese culture already existed in the 17th century, when missionaries of the Jesuits visited the Ming Empire. The most famous representative was Adam Schall von Bell from Cologne, who worked at the imperial court from 1630 to 1666 as an astronomer with the rank of imperial official. In the course of their missionary work, Adam Schall and other Jesuits made an approach to Chinese culture, learned Chinese and familiarized themselves with local customs.

Sino-German relations during the late phase of the Chinese Empire, on the other hand, were strongly influenced by burgeoning imperialism. Due to numerous military defeats, China was forced to enter into trade and diplomatic relations by various foreign powers from the middle of the 19th century. Germany established an embassy in Tianjin in 1861 and in the same year concluded a trade agreement with the imperial court. The imperialist aspirations under Kaiser Wilhelm II finally led to the conquest of Jiaozhou Bay with the center of the city of Qingdao in 1897. In the course of the Boxer Uprising in 1900, Germany sent troops to China (” Hun speech “), which was located in the capital province of Zhili carried out bloody punitive expeditions against the civilian population.

After the fall of the German Empire and the collapse of the political structures, there was intensive cooperation between the Republic of China under Chiang Kai-shek and the German Empire in the 1920’s and 1930’s. German advisors and industrialists were instrumental in building up the Chinese central army and supported Chiang Kai-shek in the fight against the communists. The cooperation ended in 1938 due to the German-Japanese alliance.

After World War II, the GDR recognized the PR China, but the FRG did not. Relations with China were always informal on the part of the FRG.

The foundation stone for today’s German-Chinese relations was laid in the early 1970’s. After Mao Zedong and Richard Nixon had sealed the rapprochement between China and the USA, the FRG established official diplomatic contacts with the PRC in October 1972. In addition to trade relations, the German-Chinese cooperation extends to the areas of environment and development, culture, science policy, etc. The relationship between the two countries is described by both sides as a “comprehensive strategic partnership”. Since 1999 there has been a constitutional dialogue between the two countries. Since 2011 regularly government consultations take place.