The central news organ of the PRC is the Xinhua news agency, which supplies the Chinese mass media with national and international news. The Xinhua Agency is the PRC’s news monopoly and can tell newspapers and radio stations what news should be published. The Xinhua Agency owns a number of important newspapers. The most famous newspaper is the Renmin Ribao (People’s Newspaper), which has been the central press organ of the CCP since 1948.

Despite centralized supervision, the press landscape in the People’s Republic of China has diversified considerably since the 1990’s. There are and 2000 newspapers and 10,000 magazines. In addition to the large national newspapers of the Xinhua agency, there are numerous local newspapers. Some of them, such as the Guangzhou Nanfang Dushibao (Southern Metropolis Daily) or the weekly Nanfang Zhoumo (Southern Weekend), are known nationwide for their relatively liberal and critical stance. The main English-language newspaper in the PRC is the China Daily. In addition to daily and weekly newspapers, there are specialist magazines on a wide variety of topics. Here too, comparatively critical publications can be found here and there, such as the Caijing magazine(Finance) or the resulting caixin from Beijing.

Although the Constitution of the PRC guarantees freedom of speech, press and assembly, there is no free media in China. The organization Reporters Without Borders placed the PRC in its ranking of press freedom for 2019 in 177th place out of a total of 180 countries observed.

All of the PRC media are controlled by the CCP’s propaganda department. The Propaganda Department oversees the Press and Publishing Authority ， Radio, Film and Television. These in turn control all Chinese book and newspaper publishers as well as radio and television stations. Xi Jinping has publicly demanded loyalty to the CCP from the Chinese media on several occasions. At the same time, centralization measures are intended to strengthen the party’s control over the media apparatus. In March 2018, for example, it was announced that all major radio and television companies would be merged into one major national media company called “Voice of China”.

The manipulation of public communication takes place through the placement of messages, preventive or subsequent censorship or digital data filters of the “big firewall”. In addition, there are coercive measures against journalists who act independently, editorial offices are closed and imprisonment. Investigative and freelance journalism is almost impossible under these circumstances.

State censorship is still extremely strict and effective, especially on sensitive topics such as Tibet, Xinjiang, Taiwan, Falungong, the events of 1989 on Tiananmen Square or on topical issues such as the corona virus. In June 2014, journalists were banned from disclosing information to foreign media. If a reporter is convicted of “betraying state secrets”, he faces a long prison sentence. Attempts are now being made to access foreign content to exert direct influence. In August 2017, at the request of the Chinese government, Cambridge University Press deleted 315 articles in the renowned “China Quarterly” magazine from its Chinese website. In mid-2020 it became known that the video conference platform Zoom accounts of Tian’anmen activists living in the USA, which had become common in the wake of the COVID-19 pandemic, had blocked the Chinese government’s request.

In addition to the censorship operated by the propaganda department, active instruments of indoctrination are now increasingly being used again. The aim is to protect one’s own ideological doctrine from “hostile foreign forces”. Issues such as Western democracy, human rights, or criticism of the CCP’s past have been declared taboo. The basis for this is the so-called “Document No. 9”, which was published in 2013. At the end of 2014, there was a campaign to bring the Chinese universities into line with ideology which aimed to convey the core values of socialism and Marxism. As a result, several professors known to be pro-democratic were dismissed. China’s universities have not experienced this level of ideological indoctrination since the mid-1990’s.

Under Xi Jinping, the control and regulation of the Internet has become a core area of state censorship. The censorship and propaganda work is being promoted significantly by the cybersecurity authority, which was founded in 2013 and whose leading figures come from the PRC propaganda apparatus.

As early as September 2013, new guidelines for the use of social networks were issued, making the spreading of “rumors and defamation” a criminal offense. The government’s threat of coercive measures no longer only extends to publications by journalists, but above all to statements made by Chinese citizens on social networks.

Recently, commercial enterprises have also been included in Internet regulation. The cybersecurity law from 2016 obliges providers of so-called “critical infrastructures” to conduct a state security check and to store important data on servers within the PRC. This gives the Chinese state extensive access to the data of the companies concerned. For example, foreign companies could be forced to disclose source codes. Since the beginning of 2018, the Chinese government has also severely restricted access to VPN clients, which previously allowed encrypted access to services from abroad (mailing services, Facebook, Twitter, etc.).

These developments are also worrying in view of the fact that the WeChat software has established itself as the central Internet platform in the PRC in recent years. This messenger service operated by Tencent offers, in contrast to messaging services such as WhatsApp, many other functions such as online shopping, payment and transfer systems, flight, train and ticket bookings, games and much more. Due to its extensive functionality, WeChat is a kind of “embedded operating system”, as it replaces many individual apps and makes them superfluous. WeChat has therefore become the most important everyday app for 650 million users in recent years become. At the same time, such extensive and widespread software opens up possibilities for government control and monitoring, since extensive personal data can be accessed. The inclusion of large amounts of digital data in the social credit system is already a reality.

China’s internet industry is also working on improved surveillance techniques – such as facial recognition – and is working in part with state authorities. More than 2 million surveillance cameras have been installed in Chongqing alone. Foreigners are now also included in the surveillance. For example, a spying app is loaded onto their mobile phones for people entering via a Central Asian country. 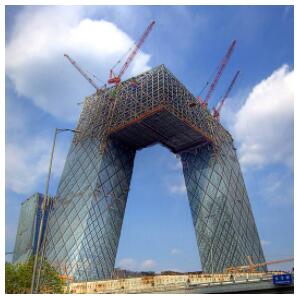