Afghanistan’s literature is written in several languages. Much of the classical literature in Persian (dari) was created in what is now Afghanistan; compare Iran (literature). From the 18th century, the literature in Afghanistan developed more in connection with the Persian poetry in India than in Iran. Poetry remained traditional for a long time, and first with poets such as Golpacha Olfat (1909-77) and Khalilollah Khalili (1909-87) contemporary themes were presented. In the field of prose, the polyhist Abdolhai Habibi (1910-84) and Bahaoddin Majruh (murdered in 1988) are labeled with the suite ※Azhdahay-e Khodi§ (‘The monster of the self’, 1973).

Since the late Middle Ages, Pashto is Afghanistan’s second literary language. Among the earliest prose works are historical works and the mystic-religious script “Kheyr ul-bayan” by Bayazid Ansari (1525-81). In recent years, the Pashto literature has been stimulated in many ways, including: through the Pashto Academy in Kabul. Several younger prose artists have appeared, e.g. author Kobra Mazhari (born 1952). In Afghanistan’s numerous languages and dialects, there is also a rich oral tradition, e.g. fairy tales, ballads and short poems. Because of the chaos and destruction that has hit the country in recent years, most of its literature is currently being created in exile. 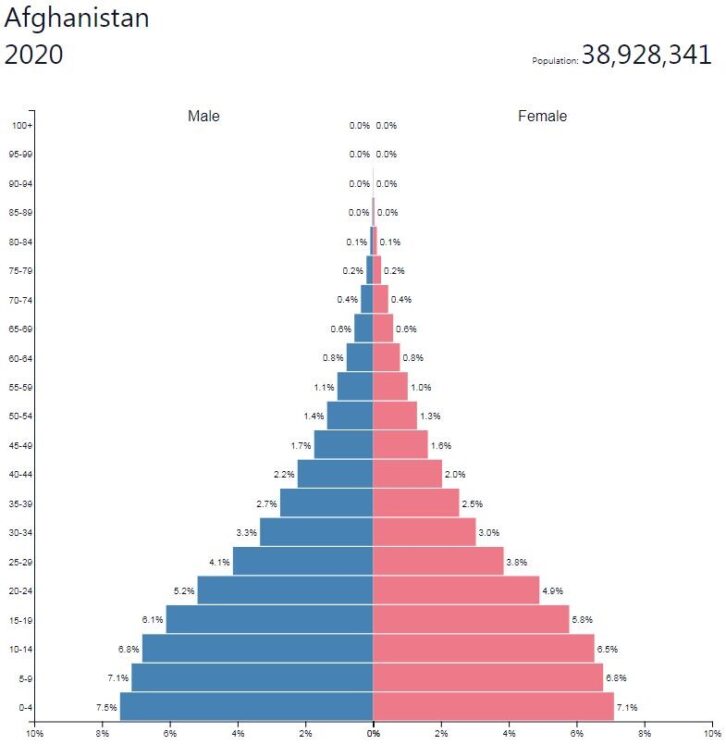 Through its geographical location, Afghanistan has always been a transit country for various Asian cultural streams. The oldest finds, dating from the 3000’s BC in Mundigak, showing features of Iranian Stone and Bronze Age. Later Indus culture emerges from the south, in turn being succeeded by Aryan cultural elements.

Afghanistan played an important role only during the century around the birth of Christ, when the Buddha image here took shape in the Gandhara art, strongly influenced by Roman Hellenism and in the Mathura style, which develops the Indian version. The Stuck sculptures in Hadda show the Hellenistic features, while the huge Buddha sculptures at the Bamiyan caves, destroyed by the Taliban in 2001, were characterized by a style with both Hellenistic and Indian elements. During the Islamic phase (from the 9th century), the matte art has its distinctive character.

Afghanistan’s ethnic complexity is reflected in the musical conditions. Therefore, one cannot speak of any unified Afghan music tradition. However, most of the different ethnic styles have some common characteristics, e.g. unanimous melody progress and lack of harmonization (however, some instruments use a bourbon, ie landscape tones against which the melody stands out). The music is performed by soloists or small ensembles, and you have a preference for lutes of different kinds. In particular, long neck closures are used, among other things. tanbur, with burgundy and resonant strings alongside the melody strings, and dutz, which are two-stringed. The former is mainly played by Pashtuns, the latter is common in the Uzbek and Turkmen areas of northern Afghanistan.

Popular music in Afghanistan developed during the 1950’s when radio and its music became an important social unifying feature. A specific radio style was created from the dramatic Pashtun style, accompanied by the radio orchestra’s modern blend of Afghan, Indian and Western instruments. Singer Mermon Parveen made groundbreaking radio debut in 1951.

The decade before the Soviet Union invasion in 1979 is regarded as the golden age of Afghan music when music films from India and the Arab world, among others, also had a great influence. At this time, popular artists such as Ahmad Zahir (1946-79), Nashenas (born 1935) and singer Farida Mahwash (born 1947) appeared today. Recent prominent artists are Farhad Darya (born 1962), Naghma (born 1964) and Shafiq Mureed (born 1981).

Many popular artists live and represent Afghan music outside the country, in the United States or Pakistan, where the Afghan popular music was kept alive to some extent even during the Taliban empire’s music ban.