Yemen is a republic in Southwest Asia (Middle East). The country is located south of the Arabian Peninsula and also includes a number of islands, including Sokotra in the Gulf of Aden and the Hanish Islands in the Red Sea. The country borders Saudi Arabia in the north and Oman in the northeast, and with its control of the Bab al-Mandeb strait between the Red Sea and the Gulf of Aden, has an important strategic location.

The population of around 29 million is mainly Arab and almost exclusively Muslim. The official language is Arabic.

Yemen has a rich history and was referred to by ancient Romans as ‘Arabia Felix’ – the happy Arabia. In recent times, Yemen, where various tribes and clans have great influence, has been characterized by much internal conflict, including the military coup and civil war – and military conflict between the two former independent states of North Yemen and South Yemen. In 1990 they merged into one state. Yemen was the scene of civil war, with the participation of military forces from other countries as well, in the 1960s, and again after the Arab Spring of 2011. A new regional war broke out in 2015.

The name Yemen is rooted in an Arabic word that can mean ‘wealth’ – or it can mean ‘(the country) to the right’, and then aims to have Muslims in Mecca with their faces facing east in prayer have Yemen on their right.

Yemen is located between Saudi Arabia in the north and the Gulf of Aden in the south. The country’s geography is dominated by a dry inland with mountains and desert, and a long coast. The plain along the coast meets a low mountain area, before the highlands with mountain masses; Yemen’s highest mountain is Jabal An-Nabï Shu’ayb (3660 meters above sea level).

A total of 112 islands are included in Yemen, including Sokotra in the Gulf of Aden, Perim, Kamaran and the Hanish Islands in the Red Sea. The Hanish Islands have been the subject of strife between Yemen and Eritrea, but in 1998 Yemen was granted sovereignty over most of the group. The border with Oman and Saudi Arabia was long unclear and disputed, but was established in 1992 and 2000 respectively.

The vegetation varies with altitude and rainfall. Yemen grows a number of useful crops, including coffee and khat in the highlands. The once significant forests were mainly cut down in the last century, contributing to further erosion and destruction. An earlier rich wildlife, which included large cats and antelopes, is extinct or threatened; Yemen still has large populations of birds and insects, and a rich maritime life in the Red Sea and the Arabian Sea.

Yemen is the second largest country in the Arabian Peninsula, after neighboring Saudi Arabia. According to countryaah.com, Yemen has around 29 million inhabitants, and population growth is high, at around 2.3 per cent per year. The population is young; About 40 percent of the population is under 15 years of age. The ongoing war has led to major social pressures, including a widespread lack of food and medicine. 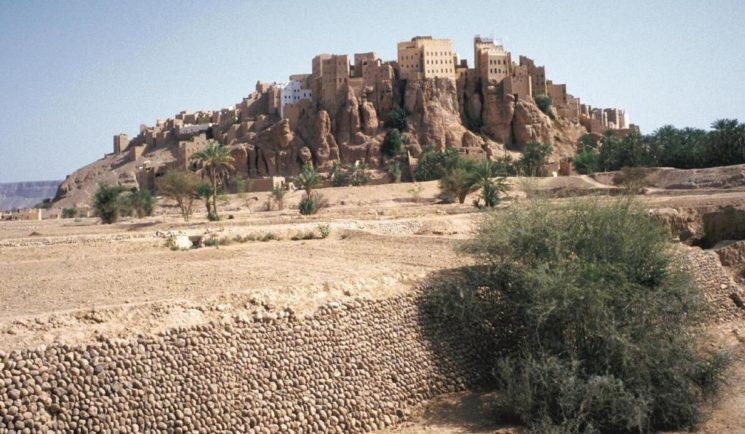 The city of Tarim was of great importance in the 1700s to the spread of the shafi’i direction of Islam (Sunni Muslims). The city has countless mosques, and in the large library, the al-Afqah Library, created in 1972, there are among other things. preserved several thousand very old manuscripts.

Most Yemenis live in small towns, especially on the coastal plains and the cultivable parts of the interior. Ancient North Yemen was less in area than South Yemen, but had more inhabitants.

Yemen’s population is mainly Arabs, divided into different tribes belonging to two main groups; one northern group said to originate in Mesopotamia, and one southern with southern Arabian roots. Mahra is an ethnic minority in the east of Yemen and in Sokotra.

Immigration from the Horn of Africa has contributed to a more complex population especially on the coast. The same has Indian and Indonesian manpower brought to Aden under British rule. Until 1948, there was a large Jewish group in Yemen; he then emigrated to Israel. Almost the entire population professes to Islam (two-thirds of Sunni, one-third Shi’a, the last belonging to the Zaidi religion).

Yemen consists of the two former independent states of North Yemen and the Democratic People’s Republic of South Yemen, which in 1990 were merged with Sanaa as the capital. Under the Constitution of 1991 (amended in 1994 and 2001), Yemen is a unified, Arab and Islamic republic, with a multi-party system. The president is elected in general elections and has executive power. 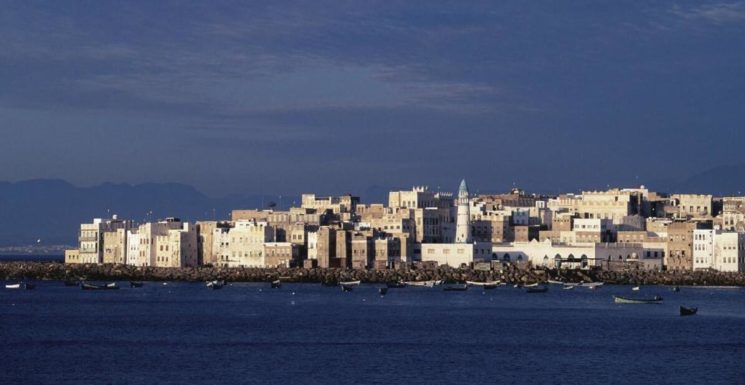 Part of the port of al-Mukalla on the Gulf of Aden.

The National Assembly consists of two chambers: The legislative power is added to the House of Representatives with 301 members, elected in the general election for six years. An advisory assembly (shura) of 111 members is appointed by the president.

Yemen’s recent political life has been partly characterized by ideological and economic differences between the two states that form the United Republic, secondly by opposition to the old regime in the north, led by President Ali Abdullah Saleh. A riot in 2011-2012 caused him to step down. In 2011, Democratic defender Tawakkol Karman received the Nobel Peace Prize for participation in this part of the Arab Spring.

The political process after the Arab Spring included a national dialogue on fundamental conflicts and challenges. This led in 2014 to a decision to make Yemen a multiregional, federal republic, divided into six states. From 2014–2015, a conflict in the northern part of the country developed first into a civil war, and to the fact that the president is forced out of the capital San’a, after the Houthi movement took control of it; then to a war in Yemen – with participation from several countries.

Yemen is a member of the UN and UN special organizations, including the World Bank, as well as the Arab League and other international organizations.

Yemen has a long history of proximity to the sea and regional shipping, and to cultures inland. The country was early Islamized, but never colonized, although parts of what was once the independent state of South Yemen, including the port city of Aden, were a British protectorate. What later became northern Yemen was for a time incorporated into the Ottoman Empire.

Northern Yemen was an imamate in recent times, and became independent in 1918 – until the state form was changed to a republic after a military coup in 1962. Egypt and Saudi Arabia intervened in a subsequent civil war, and the UN deployed a peace force, UNYOM, also with Norwegian participation. South Yemen became an independent republic in 1967, and joined the Soviet Union. In 1972 and 1979 there were short-term border wars between the two states. 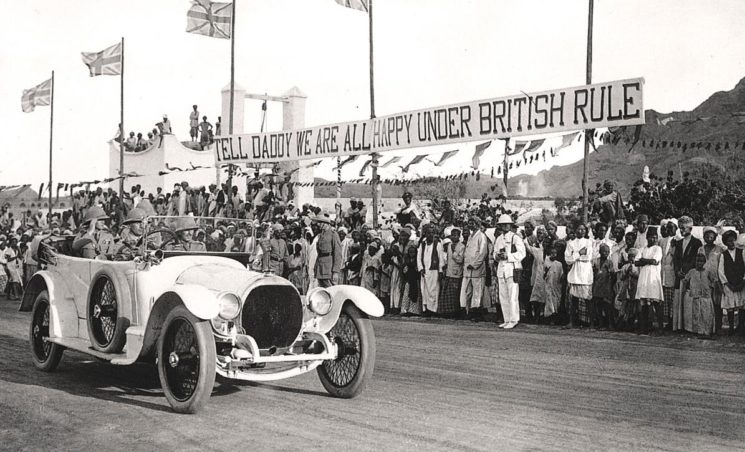 Yemen was united into one state in 1990. The discovery of oil in the border areas, as well as the collapse of the Soviet Union, hastened a solution. Continued contradictions led to forces in the south trying to break out and restore southern Yemen in 1994, but the attempt was turned down. Opposition to President Ali Abdullah Saleh grew after the turn of the millennium, leading to extensive demonstrations in 2007. During the Arab Spring, there was a popular uprising in 2011-2012, which prompted Saleh to step down.

In 2014–2015, the old uprising in the north, led by the Houthis, spread to several parts of the country. It led to civil war, and then to a multinational military intervention, led by Saudi Arabia. In addition, the United Arab Emirates in particular has participated with forces. The war in Yemen early developed into a serious humanitarian crisis, in addition to causing major material destruction.

Prolonged conflict in several parts of the country has led al-Qaeda in particular to gain early foothold in Yemen. Al Qaeda in the Arabian Peninsula ( AQAP ) established itself as the most active part of the network, with base areas in Yemen. In January 2015, the group assumed responsibility for the terrorist attack against Charlie Hebdo in Paris. After September 11, 2001, the Yemeni government began a collaboration with the United States to fight the Islamists. Al-Qaeda founder Osama bin Laden was born in Yemen. During the civil war in 2015, the Islamic State (IS) also emerged as a factor in Yemen and was behind several terrorist attacks.

Yemen is one of the poorest and least economically developed countries in the Arab world, with few proven and exploitable natural resources, and little industry, although oil is extracted and gas has been proven. Agriculture is still an important trade route, even though only six per cent of land is considered cultivable; about 30 per cent are suitable as grazing land. 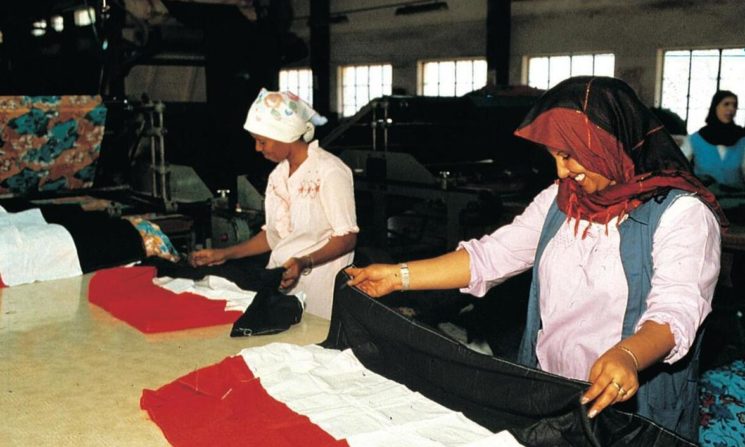 In 1990, the two Yemeni states were united into one Yemen. The picture shows workers at a flag factory making new flags.

Yemen produces a number of benefits, but is not self-sufficient in food. In the past, coffee was an important export item; khat, which has a mild narcotic effect when chewing the leaves, has become an important crop. Oil recovery began around 1990, and became a key source of revenue until recovery was hindered by the war of 2015. Yemen also has the potential for development of both fisheries and tourism. 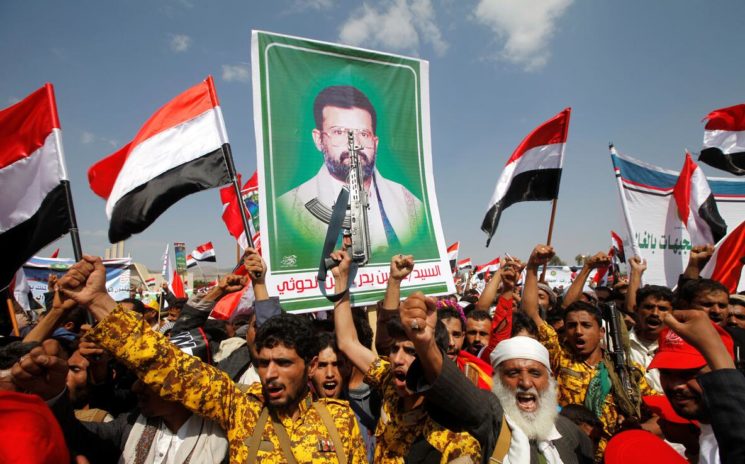 Members of the Houthi movement mark the three-year anniversary of the Houthi takeover of Yemen’s capital Sanaa, in 2017. The poster shows the movement’s founder, the late Hussein Badreddin al-Houthi.

At the merger in 1990, both Yemeni states depended on foreign aid, and money transfers from Yemeni guest workers, especially in the Gulf states.

The very different economic models of the two former states, where South Yemen had a state-controlled system and North Yemen a market economy system, contributed to challenges in integrating the states and developing the economy. The civil war of 1994, with major devastation in the economic capital of Aden, also contributed to the financial difficulties. The war of 2014–2015 has caused even greater economic and social difficulties for the country, and several organizations have highlighted the situation in 2017–2018 as the world’s most serious humanitarian crisis.