Kazakhstan is a republic and inland state of Asia bordering Russia in the north, China in the east, and Kyrgyzstan and Uzbekistan in the south.

The largest group of people is Kazakhs. There is also a large group of Russians living in Kazakhstan, as well as a number of other minorities. Kaskahstan has the largest economy of the Central Asian countries, mainly due to oil extraction.

The country’s history extends back to the Khasaki khanate, a loose association of autonomous tribes, united under a common khan. In 1731 the area was incorporated in Russia. After the Russian Revolution, Kazakhstan became part of the Soviet Union, as a separate Soviet republic. When the Soviet Union disintegrated in 1991, the country became independent.

The name comes from the word “kasakh”, which means nomad or “free man”, and the suffix -stan, which is Persian for land.

The national anthem is “Meniñ Qazaqstanım” (“My Kazakhstan”), written in 1956, as a patriotic song to the Soviet Republic of Kazakhstan. The music was composed by Shamshi Kaldajakov and the lyrics were written by Jumeken Najimedenov. The song became a national anthem in 2006, with some changes to the lyrics (allegedly written by President Nursultan Nazarbayev ).

Kazakhstan is located in Central Asia. Since Kazakhstan extends across both sides of the Ural Mountains, which is considered the border between Europe and Asia, the country also has a small part of its territory in Europe.

With its 2.7 million square kilometers, Kazakhstan is roughly the size of Western Europe. It is the ninth largest country in the world, and the largest country in the world without a coast. In the west, Kazakhstan borders the Inland Sea Caspian Sea. From there, the country extends to the Altaj Mountains to the east. The 800,000-square-kilometer Kazakh steppe occupies one-third of the area and is the world’s largest dry steppe.

The lowest point is the Karagije Gorge (“the black jaw”), which is located on the Caspian Sea, 132 meters below sea level.

Kazakhstan has a continental climate. Temperatures range from an average of 30 ° C in summer to minus 20 ° C in winter. In the north, the soil is fertile and there is some rainfall. There are large areas covered by forest, while the climate in the south is dry, with dry steppes and desert. Almost none of the rivers in Kazakhstan flow into the sea. They flow into lakes like the Caspian Sea or evaporate in the desert. Many of the rivers are dry for much of the year.

Kazakhstan is home to 500 bird species, 178 mammals, 49 reptiles, twelve amphibians and 107 different species of fish. Some animal species, such as the transcaspic urial (also known as steppe sheep) and Asian wild cat, are found elsewhere in the world.

Kazakhstan is struggling with several environmental problems, which largely occurred while the country was part of the Soviet Union. Lake Aral has shrunk to a tenth of its original size. The reason is that the water has been used for irrigation.

Much of Kazakhstan’s groundwater is polluted by emissions from the Soviet industry. In Semipalatinsk, the Soviet Union had a nuclear weapons test facility, which has led to radioactive pollution.

Kazakhstan has residents from a variety of peoples. Kasakher is the largest group, making up 63 percent of the population. Other ethnic groups include Russians (24 percent), US Cups (3 percent) and Ukrainians (2 percent), as well as smaller groups of Uighurs, Tatars, Germans and others. 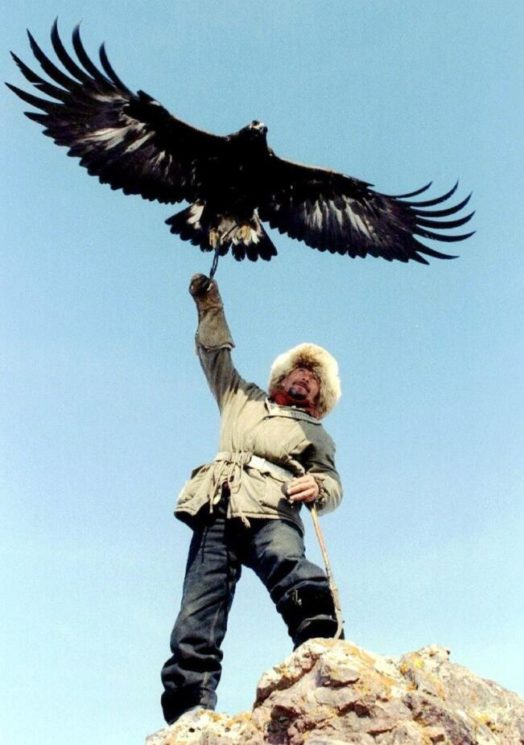 The people of the area that today make up Kazakhstan, the Kazakhs, have traditionally been a nomadic people. The picture shows a Kazakh hunting small game with a special eagle.

The population composition indicates that some of the Soviet Union’s largest gulag camps were located in Kazakhstan, and many were deported here by Stalin, either because they were considered political dissidents or because Stalin considered entire peoples groups as potential threats. This included Germans, Chechens and Koreans, as well as many Russians and Ukrainians. When the Soviet Union disbanded in 1991, a million Germans lived in Kazakhstan. Most of these have later emigrated to Germany.

The most widespread religion in Kazakhstan is Islam, to which 70 percent of the population belongs. Most Muslims in the country do not consider themselves to belong to any particular direction in Islam. 26 percent are Christians, mainly Russian Orthodox.

Russian and Kazakh are official languages. 95 percent of the population speak Russian and 65 percent speak Kazakh. In addition, there are a number of minority languages, such as Uzbek, Ukrainian, German, Kyrgyz and Uighur.

The President is elected for a term of seven years. In the 2015 presidential election, Nursultan Nazarbayev received 97.7 percent of the vote. Nazarbayev was president since Kazakhstan became independent in 1991. On March 19, 2019, Nazarbayev announced that he would resign as president, but that he retained several key positions of power, including as chairman of the Security Council and the ruling Nur-Otan ruling party. 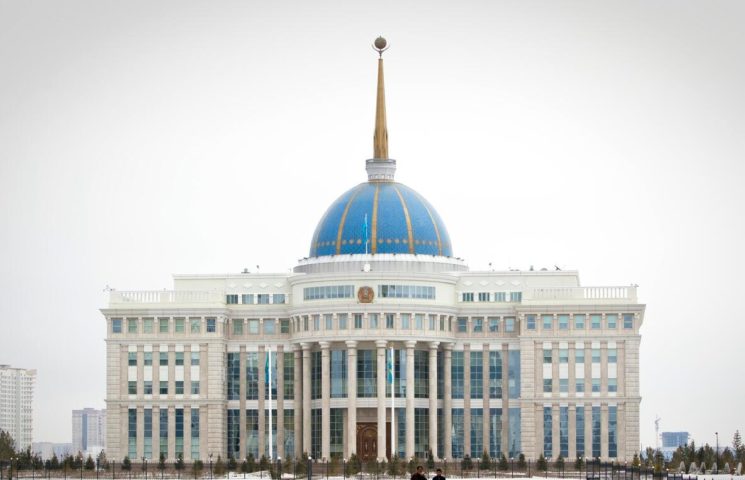 International observers from the Organization for Security and Cooperation in Europe (OSCE / ODIHR) have regularly observed presidential and parliamentary elections in Kazakhstan since becoming independent in 1991. No elections have been recognized as completely free and fair by the OSCE. Check more acronyms on Abbreviationfinder.org.

During the country’s last elections (parliamentary elections in March 2016), the OSCE noted that despite some progress, Kazakhstan still has a long way to go to secure fair elections. The OSCE further noted that the ruling party had a clear advantage over the others in the election campaign and that there is a lack of real political pluralism.

During the last parliamentary elections, President Nursultan Nazarbayev’s own party Nur-Otan took over 82 percent of the vote, while the other votes were given to two government-friendly parties, Ak Zhol and the Communist Party.

The country’s largest opposition party, Alga !, is banned and cannot take part in elections. The party’s leader, Vladimir Kozlov, was recently imprisoned and recognized by Amnesty International and other human rights organizations as a prisoner of conscience.

The judiciary is divided into local and regional courts, as well as the Supreme Court. The judges of regional and local courts are appointed by the president and serve a lifetime. The president also appoints a council, which appoints judges to the Supreme Court. There is also a Constitutional Court, which will decide whether the laws passed by Parliament are in accordance with the Constitution. The Constitutional Court has seven judges. Three of them are appointed by the president.

The policy is dominated by the party Nur Otan (the Democratic People’s Party), led by President Nazarbayev. Kazakhstan has an authoritarian regime. The US think tank Freedom House ranks Kazakhstan as a landless country in its annual World Freedom Report. 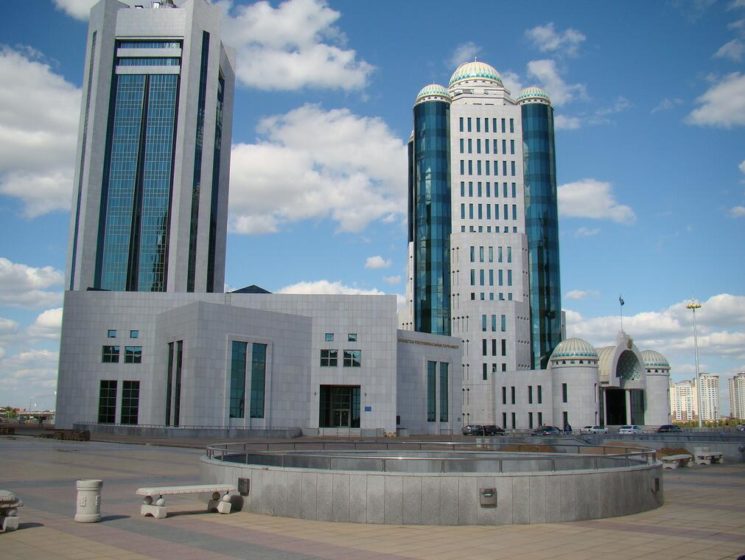 People have lived in the area that is today Kazakhstan since the Stone Age. The nomadic peoples of the Saka and Huns appeared between the year 500 BCE. and 500 AD The first state, or at least state-like entity, created in the area was the Turkish khaganate (also called the Göktürk khaganate). There are traces of the khagan dating back to the 500s.

In the 13th century, the area was conquered by Genghis Khan and the Mongols. When the Mongol Empire was divided in the 1240s, the area became part of the Golden Horde.

Between 1456 and 1465, the Kazakh Khan was founded in the southeastern part of today’s Kazakhstan. The Kazakhs today regard the Kazakh khanate as a historical predecessor to Kazakhstan, even though the khanate was only a loose association of local tribes. Khan and his nobility had limited influence.

In 1731, the Khanate was incorporated into the Russian Empire. The Kazakhs made occasional opposition to the Russian colonization throughout the 18th and 19th centuries. Russian farmers who moved to the area helped to destroy the traditional nomadic lifestyle of the Kazakhs. When Tsar Nikolai 2 in 1916 demanded that Muslims in Russia have to perform military service to fight the Germans, many Kazakhs revolted with other Central Asian peoples. This led to thousands of Kazakhs being killed by the Russians or fleeing to China and Mongolia.

After the October Revolution of 1917, a group of nationalists seized the opportunity to create an independent Kazakh state, named Alasj Orda. But it only existed for just over two years before the nationalists had to surrender to the Bolsheviks in 1920, and Kazakhstan became its own Soviet republic.

Stalin’s collectivization of agriculture in the period 1929 to 1934 led to famine. More than one million Kazakhs lost their lives. During Stalin’s rule, several peoples were deported to Kazakhstan from other parts of the Soviet Union, including Crimean Tatars and several Caucasus peoples.

Much Soviet industry was added to Kazakhstan, to keep it close to the oil and gas deposits in the Republic.

After independence, Kazakhstan has continued to have close ties to Russia. President Nazarbayev is also trying to forge ties with the other Central Asian countries, the Middle East and the West.