Cyprus is an island in the middle of the Mediterranean, around 35 ° AD. The distance from Korucam Burnu on the north coast of Turkey is approx. 65 km, while it is about 100 km from Zafer Burnu, Cyprus’ easternmost tip, to the Syrian coast.

Cyprus is structurally a folded foreland, and is geologically part of Asia Minor. The shape of the island is determined by two almost parallel west-east folding chains, which are free-standing parts of the southernmost Taurian mountain chains that delimit the Southeast Asia Plateau. The northernmost and narrowest, the Kyrenia mountains, reaches 1023 meters above sea level. and continues east into the 80 km long Carpathian Peninsula. The mountains are formed by a fold of limestone from the Cretaceous period. The southernmost mountain range, the Troodos massif, is larger and consists of eruptive rocks. Here lies the island’s highest peak, Ólimbos (Olympos, 1951 m). Between these two mountain systems lies a fertile and 19-24 km wide lavlandsslette, called Messaria, that with 1/3 of the island’s area is the most important agricultural area. There are many rivers, but most dry out in the summer. 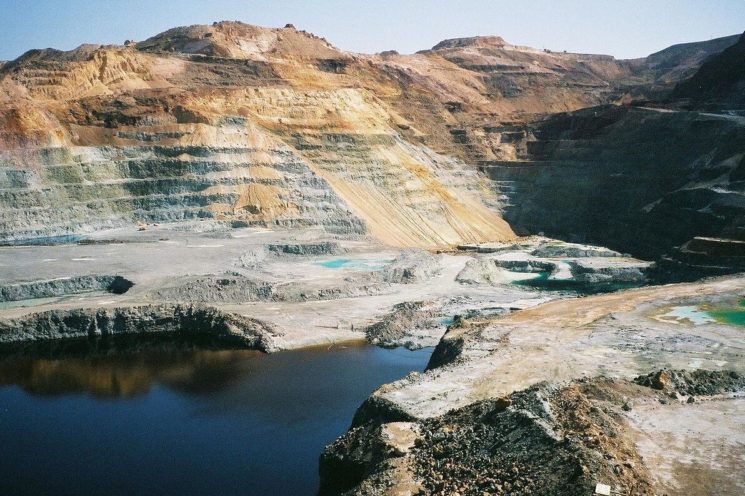 Skiriotissa copper mines in Cyprus. The very name Cyprus may mean “Copper Island”, as the country was a major supplier of copper in ancient times.

Cyprus has a typical Mediterranean climate with very mild winters and hot, dry summers. In the capital of Levkosia (Nicosia), the average temperature in the coldest month (Jan) is 10 ° C and in the warmest month (Aug.) 28 ° C, in Larnax (Larnaka) on the south coast 12 ° C and 27 ° C respectively. The relatively sparse rainfall is concentrated to the period from October to March. In the Messaria plain, there is 300–500 mm of precipitation annually (Levkosia: 340 mm), while in the higher parts of the Troodos mountains it can fall over 1000 mm.

Plant and wildlife in Cyprus

Cyprus was originally covered by large forests, but was early deforested with the exception of some areas in the mountains and the western part, where forests grow with aleppo fur, cypress and a separate cedar species, Cedrus brevifolia. In the 1970s, a forest planting program was started. to prevent soil erosion. Today’s vegetation consists of maquis and garrigue, with drought-tolerant shrubs and trees, and many annuals, which bloom in the winter months when the climatic conditions are most favorable. Characteristic plants are Cistus species, strawberry tree, lavender and oak species.

The rare muflon is the largest of the island’s 21 mammal species. Deer and wild boar disappeared in historical times, while hippo and elephant fossils attest to periods of a different climate. 83 bird species nest, including goose vulture, 5 falcon species, mountain hen and quail. Cyprus songs and cypress stones are native (endemic). An additional 290 species are registered on spring and autumn traits or as random guests. Many rest or winter in the wetlands of the salt lakes Larnax (Larnaka) and Akrotiri. 30 reptile species occur.