Best time to go to Uzbekistan

The best time to visit is in spring from May to late June and in autumn from September to November. The weather is mild at these times and the desert blooms for a short time in April. Autumn is harvest time and the markets are full of fresh fruits. Winter in Uzbekistan is usually too cold for a visit, summer too hot.

However, if you want to hike or trek in the mountains, summer (July and August) is a good choice. At all other times, the weather in the mountains is unpredictable and the passes can be impassable due to snow from Christmas to February.

The country of Uzbekistan is well worth a visit, as there are already more than four hundred architectural monuments to be seen here. A large part of these monuments, especially in Samarkand Bukhara, Khiva and Schachrizabz have already been included in the list of World Heritage Sites by UNESCO.
Tourists will definitely see a large number of different sights in Uzbekistan.

You should definitely not miss the Bibi-Chanum mosque in Samarkand. The mosque is a true masterpiece of Uzbek architecture. The Bibi Chanum Mosque was built on the model of the thousand-column mosque in Dehli. So he and the mosque temporarily worked more than five hundred stonemasons. The mosque is considered the most beautiful in the whole of the Orient.

Also worth seeing are the Kosh Madrasah and the Magoki Attari Mosque in Bukhara. Both buildings date from the twelfth century. The Kukeldasch and Barak Khan medreses in Tashkent are also worth a visit. Both schools were built in the sixteenth century.
The most beautiful medreses (schools) can be seen in Bukhara. The Mir-i-Arab madrass and the Abdul-Aziz madrassah impress visitors with their elaborate ornamentation.
The Koran schools Schir-Dos and Tillja-Kann in Samarkand also attract attention to their visitors with their wonderful architecture.

The oldest Koran school in all of Central Asia is the Ulug-Bek-Medresse in Bukhara. The saying above the portal of the building is actually particularly important. It is written there that the pursuit of knowledge is the duty of all Muslims, regardless of whether they are men or women.

The fifty-meter-high Kalon minaret in Bukhara is worth a detour. In the Middle Ages, a fire burned there day and night to act as a lighthouse for the commercial caravans in the desert.
The Tashkent transmission tower is also worth a visit. It is more than three hundred meters high. From there you have a wonderful view of the city.

A visit to the Friendship Bridge can certainly be interesting. It is located exactly between Uzbekistan and Afghanistan. The bridge is approximately eight hundred meters long and spans the Amudarja. 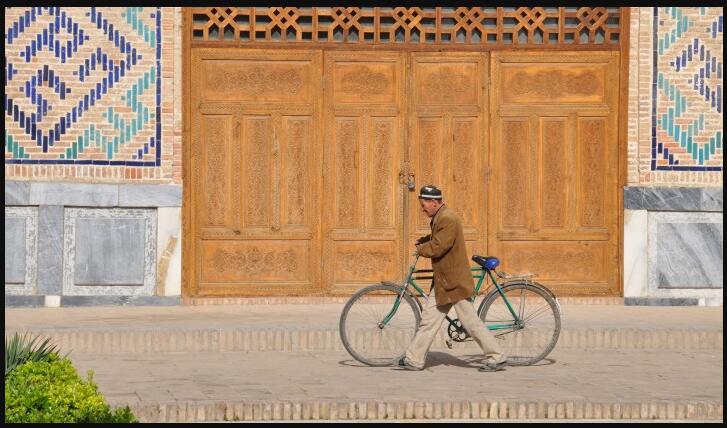 Uzbekistan is also home to the oldest Islamic building in Central Asia. The Ismil Samani Mausoleum is located in Bukhara and dates from the ninth and tenth centuries. Other interesting sights of Uzbekistan are the Gur-Emi mausoleum, the death city of Shah-i-Sinda, the Zidatelle Ark in Buachara, the palace in Tash-Hauli in Khiva and also the Setare-je-mah-e-Chase.

One of the highlights of the natural beauties of Uzbekistan is the Aral Sea.