Best time to go to the United Arab Emirates

The best time of year to visit the United Arab Emirates is between November and April, when it’s coolest. The rest of the year, you’re more likely to move from air conditioning to another rather than sightseeing. Muslim fasting in Ramadan is strictly observed in the UAE (no eating, drinking or smoking in public from sunrise to sunset). Places that normally serve alcohol are non-alcoholic in Ramadan.

Currency exchange: Money can be exchanged in the UAE Exchange Center, in banks and in the numerous private exchange offices. The latter sometimes offer better rates than the banks. If no commission is asked, the exchange rate offered is usually less favorable. It is also possible to change money in hotels. Currencies from the neighboring Gulf states can be exchanged easily in the United Arab Emirates.

ATMs: are widely used in the United Arab Emirates. In Dubai it is possible to withdraw money from ATMs using the EC card.

Foreign exchange regulations: there are no restrictions

There are daily flight connections between Abu Dhabi and Dubai. Airfields are scattered across the country where chartered planes can land.

Passenger and cargo ships operate along the coast. A water taxi on Dubai Creek connects Dubai to Deira.

Car
The main road connections in the country are between Dubai and Abu Dhabi, Dhaid and Sharjah, Dubai and the Emirates in the north and between Sharjah and Ras al-Khaimah. Driving is by far the best way to see the United Arab Emirates. This gives you the freedom to stop when you want and to see remote sights that are not used by public transport.

The main roads in the United Arab Emirates are in excellent condition, multi-lane roads connect the cities and are fully illuminated. Since 2009, Abu Dhabi and Dubai have been connected by a bridge (Saadiyat-Shahama-Highway), reducing the travel time from around an hour to a few minutes.

In the event of a car breakdown, you can call the Arabian Automobile Association (800 4900).

Rental cars Car rental
prices start at around Dh 150 for a day (including insurance) for a small car. The prices per day are cheaper if you rent a car for a week or even a month. If you rent a car for more than three days, you usually get an unlimited number of kilometers. Discounts can often also be negotiated with car rental companies.

A credit card and an international driver’s license are required to rent a car, and possibly two passport photos (depending on the rental company). In rare cases, agencies only rent cars to drivers with a local driver’s license. Smaller agencies sometimes offer slightly better prices, the large international chains have larger vehicle fleets and can exchange vehicles faster.

The Dubai Metro runs between Rashidiya and Jebel Ali. An expansion of the route network is planned.

cheap taxis can easily be found in all cities of the country. Taximeters are usually used in larger cities, but you should not rely on them. So you should be prepared to agree the price (especially on longer routes) in advance.

Tourists on the way between Dubai and Abu Dhabi often use the cheap and fast shared taxis. Shared taxis are usually found near the main bus stops in each city.

The Arab Emirates have a large number of different sights to offer their visitors. So you shouldn’t miss Abu Dhabi. The Heritage Village on Break-Water-Island in front of the city is interesting. This is a replica of a folklore village in which you can visit different living styles such as Bedouin tents, palm frond huts and stone houses. All living options are furnished according to the traditions of the country.
There is also a museum there, which is housed in a replica fort. In the museum you can see old Bedouin tools, fishing utensils, clothing and jewelry. In Heritage Village you can even see a replica fountain, a copied irrigation system from times past and a market. 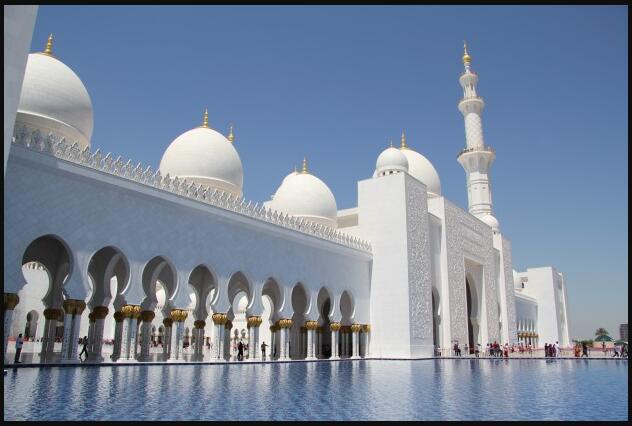 Shaikh Zayed Heritage Villag is very similar to Heritagge Village, except that you can also visit an exhibition on fishing and pearl diving.

Saadlyat Island outshines all cultural centers. A huge cultural center is being built on the island on an area of ​​27 square kilometers and at a cost of twenty billion euros. It should be ready by 2018 at the latest. It is planned that five museums will be accommodated here. In addition, up to eight thousand private villas and thirty hotels are to be built here. Visitors are particularly drawn to the miles of beaches and the mangrove forests, as well as the many bird species found there.

The Al-Hosn Fort in Abu Dhabi is worth seeing. It is the oldest as well as the only historical building in the city. The huge complex was built in 1793 and was the residence of the rulers of Abu Dhabi for more than two hundred years. Since 1983 the building has housed a museum where you can learn everything about the history of the Emirate.

A visit to the Petrol Exhibition in Abu Dhabi is certainly interesting. Here you can see the fully documented history of the Emirates oil production.

A detour to the small island of Umm al-Nar is certainly exciting. There are graves from the third millennium BC to visit.

In Al-Aqin Fort Al-Sharqi, there has been a museum with an ethnological and an archaeological section to visit since 1971.

Other interesting sights of the Emirate are the Shaikh Zayed Palace Museum, the Jahili Fort in the Al Ain Oasis, the local zoo and Hill Fun City.
The cities of Dubai and Sharajah are also worth seeing, as there are several sights to be found here. But also Ajman, Um Al-Quwain, Ras al-Khaimah and Fujairah are cities that have some tourist attractions to offer.

The artificial islands of Berak-Water-Island are a special technical feat. The Dhau shipyard in Abu Dhabi is also worth a visit. It is the largest in the country. The traditional wooden boats are still made by hand in the shipyard today. The old watchtower at Maqtaa Bridge is also worth seeing. The tower is over two hundred years old and was an important part of the city’s fortifications.

The Arab Emirates also have some impressive religious buildings to offer, such as B. the great mosque in Dubai. The mosque dates from the nineties and is an absolutely impressive dome. The complex includes a Koran school and a seventy meter high minaret. Dubai also has another mosque worth seeing: the Jumeirah Mosque from 1983. The mosque was built from ivory-colored sandstone and was divided into a main dome and many smaller domes, and it has two minarets. This mosque may not be entered by non-Muslims.

You should also have seen the King Faisal Mosque. It is the largest in the United Arab Emirates. The mosque can accommodate up to three thousand creditors.

The United Arab Emirates also have some natural beauties. The most impressive is the Al Ain oasis in the Emirate of Abu Dhabi. The oasis is mainly dominated by date trees.
Also worth seeing is the Jebel Hafeet, a mountain in the Hajar Mountains. Since the mountain was covered by an ocean several million years ago, there are countless fossilized animals to be found there today.
At the foot of the mountain, more than five hundred graves from the fourth millennium BC have been found during archaeological excavations.
The Dubai Zoo is an absolute must, especially for family vacationers. The animal enclosures have been continuously expanded since its foundation in 1967. At the moment you can see up to four thousand four hundred species of animals in the zoo.

Dubai is one of the seven emirates and the most populous city in the United Arab Emirates (UAE). It is located on the southern coast of the Persian Gulf on the Arabian Peninsula. The Dubai Municipality is also called Dubai City to distinguish it from the Emirate.

Documents testify to the existence of the city at least 150 years before the United Arab Emirates was founded. Dubai shares legal, political, military and economic functions with the other emirates within a federal framework, with each emirate retaining sovereignty over some functions, such as law enforcement and the provision and maintenance of local facilities.
Dubai has that within the UAE largest population and is by area the second largest emirate (after Abu Dhabi). Dubai and Abu Dhabi are the only two emirates that have a veto power on critical issues of national importance to the UAE.
Dubai has been ruled by the Al Maktoum dynasty since 1833. Dubai’s current ruler, Mohammed bin Rashid Al Maktoum, is also the Prime Minister and Vice President of the United Arab Emirates.

Most of the revenue Dubai comes from tourism, commerce, real estate and financial services. Oil and gas sector revenues account for less than 6% (2006) of Dubai’s $ 37 billion economy (2005). Real estate and construction, on the other hand, contribute 22.6% (2005) to the economy, even before the big construction boom.
Dubai has attracted international attention primarily through gigantic real estate projects and sporting events.

Dubai has recognized that oil reserves are not endless. So it was decided to use a second economic “train horse” and created a unique tourism concept. This primarily appeals to the international wealthy upper class.
In Dubai, like no other country in the world, luxury tourism is unparalleled. In 2008, for example, there were already 28,000 hotel rooms here. In 2011 this number will increase to 57,000. In order for this project to be realized, a completely new district was created in Dubai. The second largest hotel in the world is also being built here. It will be a 6,500 room Asia-Asia hotel.

Abu Dhabi, the capital of the United Arab Emirates of the same name, has developed from an unknown island to one of the most modern and popular cities in the world over the past forty years. Like its neighbor Dubai, it also focused on tourism long before its immense oil reserves came to an end.
In addition to traditional buildings and mosques, skyscrapers, hotels and contemporary buildings dominate the cityscape. Hotels and shopping centers offer tourists all kinds of comfort and goods from all over the world.
Public and hotel beaches invite you to enjoy the wonderful sunshine. You can turn night into day in bars, restaurants, clubs and discos.

Abu Dhabi combines luxury and style with traditional values ​​such as respect and hospitality like no other country in the world. Abu Dhabi is one of the most important tourist locations in the world. The appropriate infrastructures were started here at an early stage because the financial potential of tourism was quickly recognized.
The main reason for this focus on tourism, as already mentioned above, is that one would like to build a secure financial base in Abu Dhabi before oil revenues decrease.

The Emirates Palaceis the most famous hotel and top address in Abu Dhabi. It opened in 2005 and is a state luxury hotel that redefines the concept of luxury. It looks like a fairy tale from 1001 nights. German construction was used for the construction, planning and today also for the management. Because the German hotel chain Kempinski is behind the management of the huge complex. In addition to this flagship holiday, Abu Dhabi has other major projects in the areas of hotel and tourism. Some of them are still being realized, while others are already receiving the first prominent and rich guests.
The Saadiyat Island for example, the location of a museum city and about 30 hotels. In addition, there are several places that are only available to tourism.