The Indian monsoon, with the exception of the extreme northern area, determines the climate in all of Myanmar. Due to different surface shapes, however, its effects are regionally different.

There are three different seasons in Myanmar, which are determined by changing monsoon winds:

The cool, dry winter from November to February.

The uncomfortably hot summer from March to May.

The wet monsoon from May to October. During this time, the southwest monsoon brings moist air masses from the Gulf of Bengal moist air masses that rain down over Myanmar. The southwest monsoon begins between mid-May and mid-June and brings frequent rain to October, with peak values ​​being reached between July and September. The most rain falls in the state of Rakhaing – often more than 5,000 mm annually.

In general, the temperatures in the low and middle layers of Myanmar reach around 25 in December and January to 30 °C in April, and it cools down a bit at night. In the north and the higher regions of Myanmar it is between 6 and 8 ° colder. It can snow here in winter from 1,000 m.

The coastal areas have a higher humidity than the other regions of the country.

Best time to go to Myanmar

The best time to visit Myanmar is from November to February, when it rains the least and it’s not too hot.

If you want to visit the hill stations or the Rakhine coast, the period between March and May is also possible, but keep in mind that Bagan and Mandalay are unbearable during these months.

The dry zone (such as the area between Mandalay and Pyay) receives less rain than the rest of the country, but the roads (especially in the delta region south and east of Yangon) can become impassable everywhere during the rainy season.

The fewest visitors come to Myanmar in May, June and September.

Myanmar is unlikely to say much to most, as it has not been the case for a long time that the country is called that. Most people know Myanmar as Burma. The country is not very huge, but it has a large number of different sights and attractions to offer.

There are thousands of pagodas to visit in Burma. There is usually a stupa at the tip. The original shape of the stupa comes from the countries of India and Sri Lanka and is actually the further development of an Indian burial mound. For the locals, building a stupa is the ultimate goal that they set in life. It is of particular importance for the honor of the builder and his descendants. It is definitely worth visiting the country’s colorful and impressive pagodas. 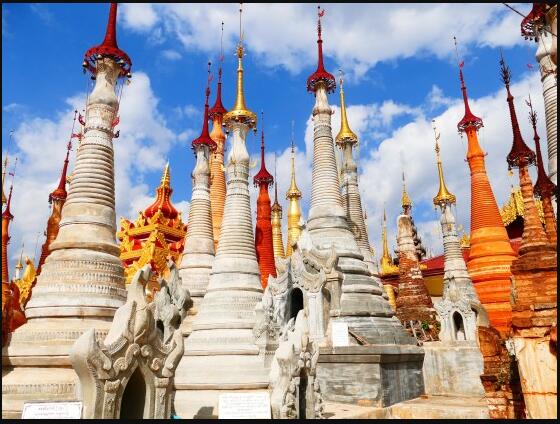 In the history of Myanmar, the capitals have been relocated several times. Therefore there is a whole list of different cities to visit. So you shouldn’t miss Py Thaton Bagan. The city was the capital of Myanmar in the eleventh to thirteenth centuries. After the invasion of the Mongols, the city, which had been influential until then, had to experience its decline. Your sights would be the more than 5,000 stupas in the area and also the ananda temple from the twelfth century. The temple is still an important pilgrimage site for believers.

It is an absolute must to see the city of Sri Ksetra. The city was founded around the fifth to ninth centuries. There you can admire the oldest Buddhist buildings on the mainland of Southeast Asia. One of the highlights there is Thayekhittaya.

The highlight of the sights in all of Burma is the Shwedagon Pagoda. It is the most important of Burma’s holy sites. The pagoda is more than a hundred meters high and richly decorated with gold as well as precious stones. There are more than five thousand rubies and diamonds at the top.

The second place in Burma’s sights goes to Kyaikityo. It is a huge golden rock with a seven meter high stupa. From a distance it looks like the rock is floating. According to legend, the rock is held in the air by a Buddha’s hair, which is said to be in the pagoda.

The Mingun Pagoda is also worth a visit. Unfortunately, it was no longer completed after the death of the then king in 1790. The second largest bell in the world is located near the Mingun Pagoda. It has a weight of more than 80 tons.

Other interesting religious buildings in Burma would be the Hshingbyume Pagoda, Sagaing and Rakhaing.

A sophisticated irrigation system was created across the country thousands of years ago, which can still be admired today. It is still used today.

Museum lovers will get their money’s worth in Burma. So there are some interesting museums to visit. Don’t miss the National Museum in Mandalay. In the museum you can learn everything about the history of the country. There is also a small library right next to the museum that exhibits important Buddhist writings.

You should also have seen the Gem Museum in Yagon. Here you can even buy some of these precious stones for those who stayed at home.