Best time to go to Mongolia

The travel season is usually from May to early October, with Ulan Bator visiting any time of the year if you can tolerate the bitter cold. In early July, the weather is best in the northern part of the country, which is also the time for the Mongolian Naadam Festival. Unfortunately, this is the highlight of the tourist season when Ulan Bator’s accommodations and transportation are insufficient. The rainy season, from the end of July to August, colors the landscape green with falling temperatures. However, the slopes are also muddy at this time, in the north there are tons of flies and mosquitos. The quieter months of June and September are a pleasant time to travel.

The best months to visit the Gobi Desert September and October are without being roasted. Be aware that between mid-October and mid-May, sudden snowstorms and extreme cold can prevent flights and block roads. Mongols, especially the nomads, consider March and April to be the worst months. After the long winter, the cattle are malnourished and lack of rain means that many animals may die. If spring is hard, staying with a nomadic family during this time is not recommended.

Mongolia is a huge country and therefore has a correspondingly large number of different sights and attractions to offer.

Nature lovers in particular get their money’s worth in the country, as there are a large number of different national parks to see. There is a unique flora and fauna to be admired in each of the parks. The most interesting national parks are the Tavan Bogd National Park, the Uvs Nuur National Park and the Tsambagaraw Lul National Park.
There are also some natural beauties in Mongolia, such as the Terchin Tsaggan Nur in the Archangai Almag. The White Lake is in the middle of a bizarre volcanic landscape with extravagant rock formations. 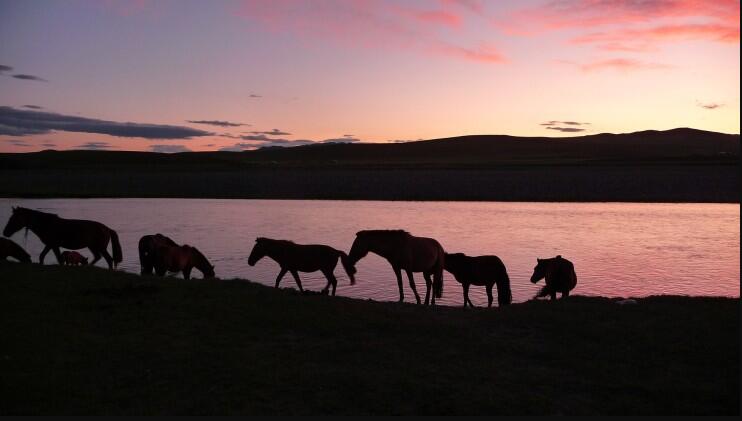 Also worth seeing is the Gobi Desert or the steppe landscape of the Süchbaatar Almag. The Tallin Agul lava cave is something special. The impressive cave is two hundred meters long. The entrance is not accessible all year round because it is frozen over most of the time. The cave can only be entered from August.

Ornithologists mainly have fun at Lake Ganga, as there are thousands of cranes and other bird species to see, especially in autumn. One can relax from long hikes through the Mongolian countryside in one of the forty hot springs in the mountain region of Changai.

Mongolia also has a number of religious buildings to offer, which will certainly be interesting to visit. So you should not miss the Living Buddhist Monastery in Ulan Bator. The monastery used to be the seat of the Buddhist head. Today it houses the Zanabazar Art Museum, as well as a religious museum. The highlights that the Religious Museum has to offer are some Buddha statues and thongs.

The Ganda Monastery is also worth a visit. You should have seen Erden Zuu Monastery near Harhorin directly in central Mongolia. The monastery was founded in 1586 by Abdai Khan and was the first Buddhist monastery in the whole country. Unfortunately, not all parts of the monastery are preserved today, as some have fallen victim to communist rule. However, attempts have been made to restore some parts through restoration.

Tourists interested in archeology will experience something special in Mongolia. So you should definitely look at the Neolithic and Bronze Age rock art on the banks of the Chultyn-Gol river. The rock paintings in the Chulut River canyon are also worth a visit. If you are interested in the dinosaur era, you should take a detour to the Namagetu Mountains in the Gobi Desert. So far most of the dinosaur skeletons in the country have been found here.

The museum lovers among the visitors to Mongolia should not miss the Natural History Museum. There is everything to learn about the flora and fauna native to Mongolia. Art lovers don’t miss out in Mongolia either. The Museum of Fine Arts is definitely worth a recommendation for this group of tourists. The winter palace of the Bogd Khan in Ulan Bator is also worth seeing.

A unique collection of Sanskrit manuscripts can be seen in the National Library in Ulaanbaatar.

Other interesting sights of Mongolia are the ruins in the valley of the Orchon River, the ruins of Karakorum or the ruins of Cherle Bars Choto in Sumon. The meaning of the stone statues of Churgurin has not yet been clarified. Nevertheless, they attract thousands of tourists to the Churgurin Chundil valley in southern Baatar Alamag every year.

The cultural, economic and political center of Mongolia is Ulan Bator. The city is located at 1,350 meters on the Tuul River, right on the Bogd Khan Uul Mountain, which is 2,256 meters high.

In 1639 the city was founded under its old name Örgöö as the seat of Lamaism in Mongolia. After changing its location twenty-five times in 150 years, the city of Ulaanbaatar has been at its current location since 1778. Mongolia declared independence in 1911 and the Mongolian People’s Republic was proclaimed in 1924.

Since the population of Ulaanbaatar for the most part Buddhist there are many monasteries and temples worth seeing.

The Gandan Monastery
This monastery dates from the founding days of Ulan Bator. It is the most important monastery in all of Mongolia and especially famous for its 26 meter high statue of the goddess Janraisig. A new throne chair was created in honor of the Dalai Lama, the actual head of the monastery.

The Bogd Khan Temple / Palace
This temple was built in 1893 and was the residence of Bogd Khan Dshebdsund-Dumba VIII until his death in 1924.

Theatre
Various theaters and theater companies can also be found in the Mongolian capital. The most famous are the State Opera, the ballet, folk song and dance ensemble and the much-visited theater.

The museums in Ulan Bator have a wide variety of topics to offer.

Natural History Museum
The largest museum in this city has, among other things, a paleontological section, in which dinosaur skeletons from the smallest to the largest prehistoric animal..

National Historical Museum
In this museum, visitors get a deeper insight into the history of Mongolia and its long tradition as a nomadic people.

The “G-Zanalazar Art Museum”
The main focus here is on the Buddhist works of art by Zanabazar. The ancient art of Mongolia also arouses great interest among visitors to this museum in the pictures, sculptures and tankas of Buddhism in Mongolia.

The Museum of Fine Arts
If you are very interested in the centuries-old handicrafts of Mongolia and also love modern and classical painting, you should definitely visit this museum.

The Ulan Bator City Museum
In this museum you can learn a lot about the origin and history of the city.

Events
The biggest folk festival takes place every year on July 11thall of Mongolia. At this event, men from all parts of Mongolia meet to find the best in various sports such as wrestling, archery and hoops.