There is an almost tropical climate in Oman, which is influenced by trade winds and monsoon foothills. The varied geography means that there is a wide range of climatic conditions in Oman.

In Muscat and in the northern coastal plains, it is hot and humid in summer from mid-March to October (average June temperatures in Muscat are 34.5 ° C, sometimes the temperatures rise to more than 40 ° C). In winter from October to March it is pleasantly warm here (average January temperatures 22 ° C). The humidity in this region of Oman is high all year round.

In the Dhofar region in the south of the country, the weather is almost tropical with winter temperatures of around 20 to 28 ° C. In summer the temperatures are around 30 ° C. In the Salalah region, khareef, a light monsoon rain in the mountains from June to September, provides vegetation.

The interior of Oman consists of deserts. In winter the maximum temperatures are around 25 ° C, in summer up to 50 ° C. The differences between day and night temperatures are typically large in the desert. The air humidity is low here.

Due to the Gharbi, a hot fall wind from the northern Oman Mountains, the temperatures in summer, combined with high humidity, rise in regions that are sometimes dangerous. About 100 mm of precipitation falls annually in the dry coastal regions, and around 500 mm is more humid in the Oman Mountains.

Best time to go to Oman

The best time to visit Oman is between November and mid-March, when visibility is better and daytime temperatures average 25 ° C. Most of Oman is very hot and hazy for the rest of the year, especially between May and August.
Avoid the rainy season in the south (from June to September) although this is the peak season for visitors from the United Arab Emirates who come to Dhofar to admire the green mountains in the desert.

Oman is an interesting country, which invites many of the visitors to dream. The Arabian country has a large number of different sights to offer its visitors.

The capital of the country Masqat is absolutely worth seeing. Until a few years ago you had the feeling that the time in Masqat would have stopped in the Middle Ages. Even the city gates were closed every evening. 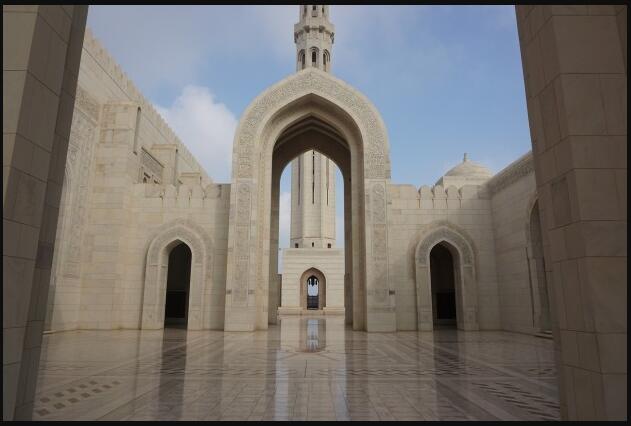 Only when the Sultan Qabus Ibn Said came to power was modernization carried out in Masqat. The sultan has managed to build a modern metropolis on the Gulf of Oman.

The port city of Sur is also worth a visit. Since some buildings have fallen victim to progressive modernization, there are hardly any historical buildings here.

Nizwa is especially important for the Muslims in Oman, because here in the city is the religious center of the country. Here Islam was adopted in the seventh century and the first Imam was also elected.

One of the most interesting buildings is the large mosque in Masqat, the construction of which was completed in 2001. It is the largest religious building in the country, since up to twenty thousand believers can find a place here. The interior of the mosque with its huge chandelier is particularly impressive.

You should also have seen the mosque in Bilad Bani Bu Ali. It was built from parallel barrel vaults and is supported by 48 domes.

Another building worth seeing is the Sultan Qaboos Mosque in Nizwa. The visitors were particularly taken with the blue and gold dome with the huge minaret.

Those who spend their vacation in Oman should not miss the three old permanent shipyards in Sur. Here you can still see the emergence of the Daus, an old type of ship from the Orient.
But the port of Mirbat is also definitely worth seeing. It was one of the most important export ports for frankincense until the eighteenth century. Likewise, the port of Sammaram. Its origins go back to the pre-Islamic period in the country.

Although modernization is ongoing in Oman, there are still some historic buildings to see. So you shouldn’t miss the Mirani Fortress. The fortress was built over Masqat Bay in the sixteenth century. It was the accommodation for the royal guard and is therefore not freely accessible to tourists.

The former French embassy in Masqat is worth seeing. Today the Ottoman-French museum is housed there. There are interesting exhibitions to see, such as French and Ottoman traditional costumes.

Don’t miss the visit to the ruins of Qalhat. The field shows the ruins of a formerly magnificent city, which even Marco Polo mentioned in his writings.

One of the most important cultural monuments in the country is the fortress of Nizwa. The fortress dates from the seventeenth century. It has a huge cannon tower 23 meters high and about 40 meters in diameter. From the fortress you can enjoy a wonderful view of the city.

But nature lovers will also get their money’s worth in Oman. You shouldn’t miss the hot springs of Ain Thowarah in Nakhi, because it is a great place to relax. The Mughsayl lagoon is also worth a visit. There are holes in the rock there, from which fountains shoot when the sea pressure rises in the lagoon.