Brunei comprises two parts separated by the Limbang Valley in Sarawak (Malaysia) on the northwestern part of the island of Borneo. The western part of the country consists mainly of low hills and swamps, drained by the rivers Belait, Tutong and Brunei. The eastern part, which includes Temburong’s river basin, is characterized by high ridge. 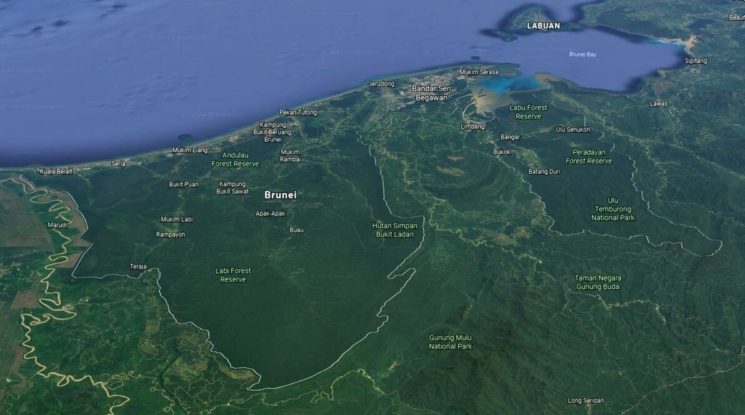 Brunei consists of two parts that are not adjacent to each other. The coastline, which is mostly small, is 161 kilometers long. Most of Brunei is lowland, while there are low mountains inland.

Most of Brunei has dense lowland forests while inland there are areas with mountain rainforest. At the coast and the lower rivers are mangrove forests. More than 80 percent of the land is forested. Only two percent of the area is cultivable, half is cultivated.

The wildlife is rich. Among mammals, there are tigers, several monkeys, sambar deer and shellfish. The buzzing bird life includes rhino and argus pheasants. There are many reptile species, including web pythons.

Brunei has an equatorial climate with high heat and high humidity throughout the year. The average temperature is about 27 ° C on an annual basis, with very small seasonal variations. The rainfall exceeds 2500 mm along the coast, 3500 mm inland. Some inland areas have more than 7000 mm of annual rainfall.

Plant life and wildlife in Brunei

About three quarters of Brunei is covered by dense rainforest. Wildlife is rich and includes tigers, monkeys and many bird species.