Bhutan is a small kingdom in the Eastern Himalayas, between China (Tibet) in the north and west and India in the south and east.

The country is very mountainous and rugged. Bhutan is one of the least developed countries in the world and is politically dependent on support from India.

The country has been very isolated from the outside world for centuries, but in recent years has opened something up. Increasing tourism and influence from other countries have resulted in a number of measures to preserve Bhutanese culture and identity.

The country is located on the southern slope of the Eastern Himalayas. It is 300 km east-west and 170 km north-south.

The northern part is a high alpine country dating from approx. 4000 masl and up to the peaks of the Himalayas at the edge of the Tibetan Plateau. The highest mountains are Kula Kangr (7554 m) and Gangker Punsum (7550 m).

The southern part has tropical climate, while central areas have temperate climate with monsoon rain. At the border mountains of the Great Himalayas, the climate is almost arctic. 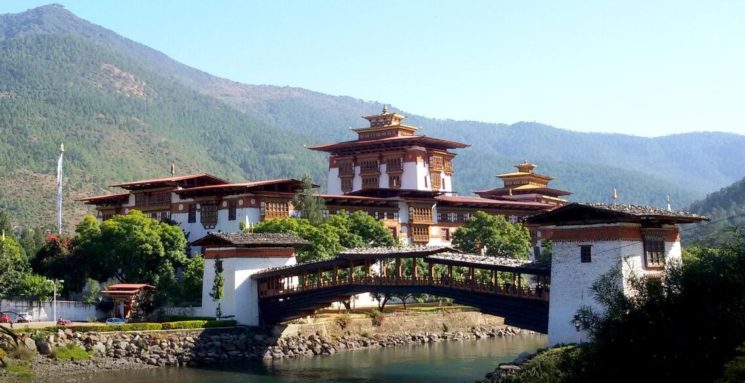 Estimates of the population are uncertain, but it is estimated at 758 288 (2017). Bhutan has several different population groups who each speak their own language. The largest is the shark population that lives in the eastern part of the country. In the west live the Ngalop people who come from Tibet. Their language, dzongkha, is the official language of the country. In the south live Nepalese (Lepcha people), often referred to as Southern Bhutanese.

An ethnic conflict has created unrest in Bhutan since the late 1980s. Ethnic Nepalese from India and Nepal have illegally immigrated to Bhutan’s fertile lowlands in the south for decades, and there have been strong tensions between the Nepalese and the Bhutan people

The Bhutanese follow the Tibetan form of Buddhism. Bhutan is today the only country in Asia where Mahayana Buddhism is state religion.

Bhutan got its first written constitution in 2008, after the country, in a transition period from 1999, had moved from being an absolute monarchy towards a political system of more popular participation.

According to the new constitution, Bhutan is now a democratic constitutional monarchy with a constitutional two-party system. The king still has a lot of power and both political parties are monarchilogical.

Bhutan is a member of the UN and most of the UN’s special organizations, including the World Bank.

The country was united into one kingdom in the 17th century and then ruled by a worldly and a clergy prince. The local governors had great power. Conflicts between them led to a number of civil wars in the 19th century and until 1907, when the current dynasty, Wangchuk, came to the throne.

From 1770 Bhutan was often in conflict with the British authorities in India. In 1910, the British gained control of Bhutan’s foreign policy, a control India took over in 1949. At the same time, India undertook not to interfere with Bhutan’s internal affairs. The Indians have assumed responsibility for the country’s security and provided considerable financial assistance.

Bhutan maintained a strict isolation for hundreds of years, but around 1960 King Jigme Dorji Wangchuk initiated a reform policy with a cautious opening outward.

In 1998, a democratization process started. The king then gave up his almost absolute power and resigned from the post of head of government.

Bhutan’s traditional economic base is agriculture and livestock farming for self-catering. Forestry is also important. The country has large natural resources in the form of hydropower, forests and minerals.

Agriculture employs about 60 per cent of the population. The majority of these farmers are self-sufficient.

Bhutan’s foreign economy is largely linked to exports of hydropower to India. These exports continue to increase in line with the expansion of the Bhutan hydropower sector. In recent years, Bhutan has seen steady economic growth of around 5 per cent annually. 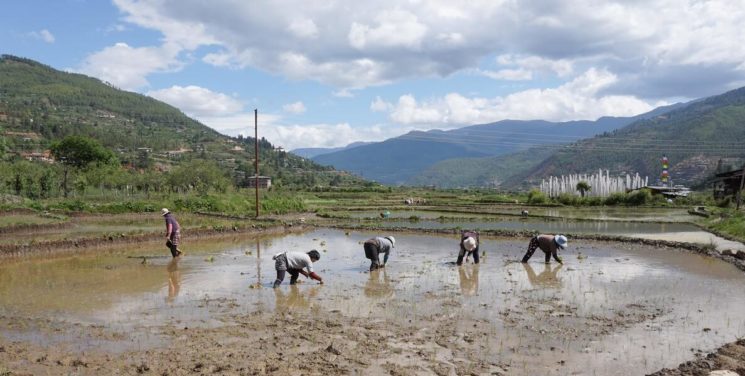 Tourism is a potential growth industry for the country, but the authorities have restricted tourism to protect the local culture.

A large part of the state budget is financed through aid, primarily from India, but also from the UN and international organizations.

Bhutan wants to protect its culture, and for many centuries the country was almost without influence from the outside world. The country’s culture is strongly linked to Buddhism.

The national sport is archery. The competitions are often big events with serving and performances in song and dance.