Best time to go to Brunei

The weather is not a factor that is given much attention when traveling to Brunei: it is always warm and wet. The official rainy season is between September and January, when the weather conditions are even warmer and wetter. Shops close earlier during Ramadan, when all Muslims have to fast between sunrise and sunset. It is worth considering planning your trip outside of this time.

The Brunei dollar is pegged 1: 1 to the Singapore dollar.

Currency exchange: Common currencies (especially US dollars) are exchanged in every bank. There are also exchange offices.

ATMs: common in Brunei. Cards with the Cirrus or Maestro symbol are only accepted at some ATMs.

Customs regulations: Foreign currencies can be imported into Brunei without restrictions.

Brunei is a country whose tourists will certainly not go home disappointed because the holiday has been boring. The country has many interesting sights and attractions to offer.

So you should definitely not miss the Omar All Saifuddien Mosque. It was named after the father of the current sultan. The mosque was built on the artificial lake in Bandar Seri Begawan from Italian marble. An absolute highlight is the Venetian mosaic, for which more than 3.5 million small stones were used. The mosque’s main cathedral was given a new luster by the mosaic. The mosque was completed in 1958. 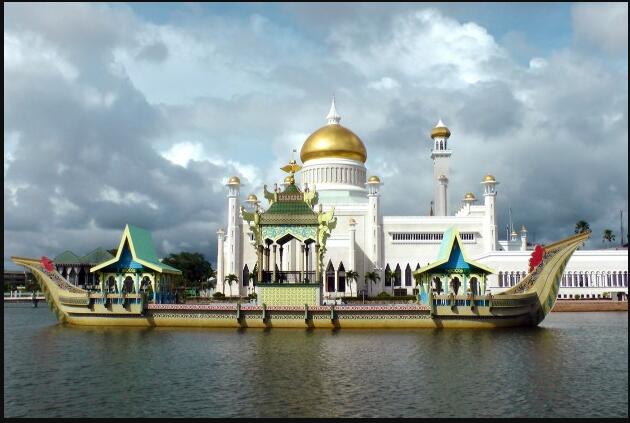 In the Royal Regalia Building you can visit the ruler’s treasuries. There are some magnificent royal jewels to be seen there.
Those interested in the country’s history should check out the Brunei History Center. The center was opened in 1982.

An absolute highlight is the water village “Kampong Ayer” in Bandar Seri Begwan. You should also have seen the Sultan’s Palace, which is also located in Bandar Seri Begwan. The palace itself is huge. It has more than 1,500 rooms and more than two hundred toilets. The cost of building the palace alone was more than three hundred and fifty million dollars. The Sultan’s Palace is one of the largest residential buildings in the world. Unfortunately, the inside of the palace is not open to the public.

The traditional Malaysian water houses are also worth seeing. A large number of houses on stilts can be seen on the banks of the Brunei River in the former Sultan city of Kampong Ayer.

The Labi Long House is a bit bizarre but still worth a visit. This is a village that is under the roof of a single house.

The largest lake in the country is the Tasek Merumbun. The lake is located in the Tutong district. Especially bathing vacationers should not miss the Seri Kenangan Beach. The Sungai Liang Forest Recration Park is certainly interesting for nature lovers. The last flatland forests in all of Southeast Asia can be seen in the park.

The Wasai Wong Kadir is absolutely impressive. The waterfall in the Belait district is one of the most popular tourist destinations in Brunei.

One of the special attractions of Brunei is the royal barque. The barque was modeled on the boats from the sixteenth century and is located right next to the Alil Saifuddien mosque.

The national airline Royal Brunei Airlines (BI) offers its passengers direct flights between Brunei and the most important Asian cities, such as Bangkok, Jakarta, Manila, Hong Kong or Kuala Lumpur. There are also connections to Kota Kinabalu (Sabah).
Other airlines with flights to and from Brunei are Thai Airways International (TG), Malaysia Airlines (MH) and Singapore Airlines (SQ).

The only airport in Brunei is about 10 kilometers from the center of the capital Bandar Seri Begawan.

There are ship connections between Brunei and Limbang (Sarawak) and Pulau Labuan (Sabah). The ferries operate from the Muara Ferry Terminal, 25 kilometers northeast of the capital. There is also a ship connection between Bandar Seri Begawan and Limbang.

The main land route to the west connects Kuala Belait in Brunei with Miri in Sarawak. There are easy travel options by bus or taxi. Another possible, but somewhat complex land route runs from Bandar Seri Begawan to Limbang and Lawas (Sarawak) and from there to Kota Kinabalu (Sabah).

The only noteworthy ferry service within Brunei connects Bandar Seri Begawan with Bangar in the Temburong District. For short trips, travelers can rent one of the numerous water taxis.

Traveling with a rental car is the easiest way to explore Brunei. But also an expensive one. Off the main routes, however, it can be difficult to get ahead without your own vehicle.
There is left-hand traffic in Brunei.

The local bus system in and around Bandar Seri Begawan is well developed and inexpensive. However, the connections are only served until evening.