Best time to travel to Bhutan

The ideal time for trekking is between late September and late November, when the sky is usually clear and visibility is good. March to May is considered the second best trekking time in Bhutan. There are more clouds and rain, but the wild flowers are in full bloom and numerous birds can be observed. There is a chance of rain every season but avoid the monsoon season from June to August, with average rainfall of 500mm in Thimphu and up to 1,000mm in the eastern mountains.

Winter is a good time for tours in the west of Bhutan, bird watching in the subtropical, southern regions and white water rafting are particularly worthwhile. The days are sunny and cool, but it gets relatively cold as soon as the sun goes down. From December to February the road from Thimphu to Bumthang may be closed due to snowfall. It is best not to plan trips to these regions during this time.

In recent years the tsechus (Buddhist festivals) in Thimphu and Paro have been very popular with tourists. If you focus on other cultural events, you will have much less problems getting flights and accommodation.

The ngultrum is tied to the Indian rupee in a ratio of 1: 1.

Currency exchange: Common currencies are exchanged in the Bank of Bhutan and in the Bhutan National Bank. There are also exchange options at the airport and in upscale hotels.

Cash: For larger purchases such as textiles or artifacts, it is advisable to have US dollars in cash. Most stores accept this currency and exempt you from the exchange effort.

Credit cards: are hardly accepted in Bhutan. Credit cards are accepted in state craft stores and some of the larger hotels in Thimphu, but these transactions are often time consuming. The credit card companies charge high fees and the card can usually only be checked during the day. It is therefore impossible to pay your hotel bill at night or when you check out in the morning.

ATMs: Although there are ATMs from the Bhutan National Bank, these can only be used with local cards. However, there are plans to set up ATMs that can be used to withdraw money using standard cards.

Traveler’s checks: should be issued in US dollars by well-known companies such as American Express, Barclays, Thomas Cook, Visa or Citibank. Travelers checks are exchanged in the Bank of Bhutan, at the currency exchange counter at the airport, and in most hotels. The fee for cashing travelers checks is 1%. Stolen or lost travelers checks cannot be replaced in Bhutan.

Bank opening times: Mon – Fri 10 a.m. – 1 p.m. Some banks in the capital are also open on Saturday and Sunday.

Bhutan has some great sights and attractions to offer. 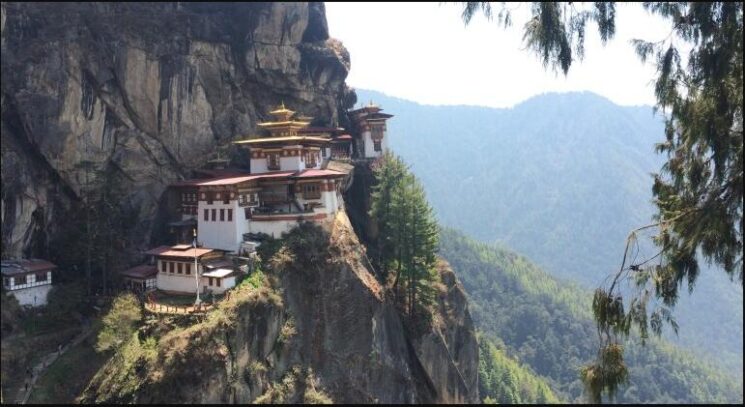 The absolute highlight of Bhutan’s sights is the Buddha Drodenma statue. The giant Buddha statue has been in the country’s capital, Thimphu, since 2008.
It was erected on the Kuensel Phodrang mountain and from there watches over the city.

The square of the bell tower is also worth a visit. The square in Thimphu was only recently restored. It is surrounded by several country and restaurants, as well as fountains and traditional Bhutanese Mani Lhalhor. Mani Lhalhor are prayer wheels. The first-class Hotel Druck is also located on the square.

Don’t miss the Memorial Chorten. The building is the main feature of the Skykline Thimphus. The building itself was dedicated to Dorji Wangchuck, who had an accident while sailing.

A visit to the National Library is not only recommended for bookworms among tourists. The library building was built in 1967 in the style of a Buddhist temple. The library has some interesting manuscripts in Dzongkha, classical Tibetan and English. There is also a large collection of religious books to be admired in the National Library. One of the highlights is the copy of the world’s largest published book.

The National Post Office is worth seeing, but only because you can visit and buy the most important Bhutanese export hit – stamps.

The national airline of Bhutan is Druk Air. The flight schedules are seasonal. However, there are regular connections to and from Bangkok (Thailand) via Dhaka or Calcutta (India).
For a journey from Europe, for example, the route via London and Delhi is recommended. From there there are flight connections to Bhutan.

Bhutan’s only international airport is Paro. It is located about six kilometers from the town of the same name in the Paro Valley.

All land routes from and to Bhutan via Phuentsholing lead via Siliguri in West Bengal, the most important traffic junction in northern India. From there there are connections to Calcutta, Delhi or to the Nepalese border to Kakarbhitta. In addition, travelers can conveniently travel on from there to the Indian mountain regions of Kalimpong, Sikkim (Gangtok) and Darjeeling. Bhutanese vehicles have free travel in India.

Taxis and rental cars are available in both Phuentsholing and Siliguri. Several Bhutanese transport companies operate direct bus connections between Phuentsholing and Siliguri several times a day. Indian bus companies offer connections between Siliguri and the border town of Jaigaon on the Indian side of the Bhutanese border.
The closest larger station to Phuentsholing is New Jailpaiguri. From there, travelers can get to Calcutta by train within twelve hours. A trip to Delhi takes about 33 hours.

If you want to travel to Bhutan with your own vehicle, you should rent a vehicle and driver. Driving in Bhutan is exhausting. The streets are often very narrow and busy.

Bhutan’s public buses are often crowded and old, but inexpensive. A bus ride can be quite uncomfortable on the winding roads. The minibuses are operated by the state-owned companies Dawa Transport and Bhutan Post Express as well as a number of other companies. Some private operators, such as Karma Transport or Leksol Bus Service, offer trips in more comfortable buses at higher tariffs.
Buses run several times a day between the capital Thimphu and important centers such as Punakha, Phuentsholing or Paro.

The upper areas of the Paro and Thimphu valleys offer good routes for traveling by mountain bike.