Tajikistan’s classical literature forms part of Persian literature. Many of the Iranian poets worked in eastern Iran, which included the current Tajikistan, including Rudaki, who is considered the father of both the Persian and the Tajik poets. When Central Asia was isolated from Iran in the 16th century, the trend towards a specific Tajik literature began, and from the end of the 19th century the classical ideals began to change under Russian influence, including by the essayist Ahmad Donish. Sadriddin Ayni is the creator of modern prose, followed by the proseists Sotim Ulughzoda and Djalol Ikromi and the leading poet Mirzo Tursunzoda. Newer proseists include Urun Kuhzod and Sattor Tursun, and poets Gulrukhsor Safieva, Loyiq Sherali and Bozor Sobir.

Tajikistan’s film history can be divided into four stages: the first from the Revolution to 1955, the second 1955-65, the third 1965-85 and the latest from the perestroika to our days. Most memorable from the earliest times is Kamil Jarmatov’s (1903-78) “The Emigrant” (1934), a film whose design language transcends the sense of morality – procollectivization. 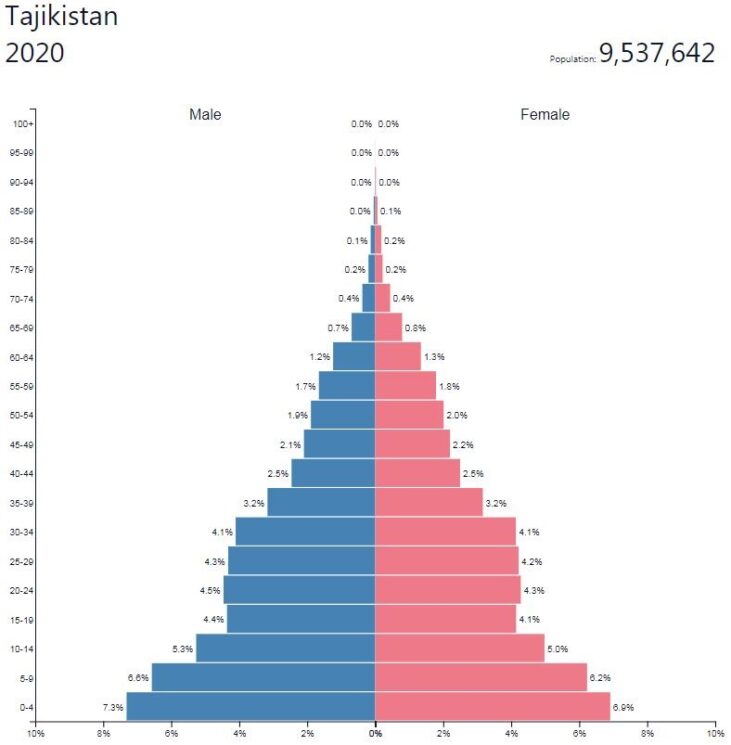 The second phase is unimportant, with films expressing propaganda and personal cult. The third was characterized by a number of movie talents with weakness for heroism, e.g. Bension Kimjagarov (1920-79) with films such as ※Dokhounda§ (1956) and ※Rustam & Sukhrab§ (1971).

Davlat Khudonazarov (born 1944) made his mark with both documentaries and feature films on the history and traditions of the Pamir region. However, it was not until the fourth stage, after ideological control ceased, that the domestic film could be developed with directors such as Khudonazarov, Margarita Kasymova (born 1938) and Bako Sadykov (born 1941), whose 1980 censorship-banned “Adonis” is a political and philosophical masterpiece.

New filmmakers include Bakhtyar Khudojnazarov (born 1965) whose “Two Brothers” (1991) and “Luna Papa” (1999) have been shown in Sweden. Jamshed Usmonov (born 1965) received both “Fararishtay kifti rust” (“The Angels are Right”, 2002) and “Bihisht faqat baroi murdagon” (“To get to heaven one must die”, 2006) selected for the Un certain regard series in Cannes.

Folk music can be divided into three regional styles. In central Tajikistan, the folk music of the plain dwellers is akin to that of the Uzbek people in the Buchara – Samarkand region. Common instruments are dutz, tanbur (lutes), tongs (chopping board), gidjak (fiddle), surnaj (shalmeja), nagara and dojra (drums). The music of the mountain people has many archaic features, in the north it is related to the music of southern Kyrgyzstan; in Pamir in the south with the music of northern Afghanistan. Common instruments are tulak (flute), dumbbell (lute), gidjak and Pamir rubob (lute).

As in other parts of Muslim Central Asia, music is divided into male and female versions. Most musicians are men, and many of the instruments are tied to the men’s world. The women’s world includes singing, often accompanied by frame drums, but also ensembles by professional female wedding musicians (sozanda) who play many different instruments. Common genres, e.g. falak, suites of songs and instrumental music, are linked to the festivities of life and the year, such as baptism, wedding, funeral, Newroz (New Year) and Lola (tulip party).

During the Soviet era, Western art music and ballet were introduced. In the 1930’s, several music schools and higher dance education were opened. In 1938, the Dushanbe Tajik Philharmonic, to which folklore ensembles and folk instrument orchestras with reconstructed instruments and tempered mood, were formed, following the Soviet model. In 1940, opera and ballet theater were opened. Among composers are Sulejman Judakov (1916-90), Zijodullo Sjachidi (1914-85) and his son Tolib Sjachidi (born 1946). In the cities a lively popular music emerged, with genres such as garibi, songs about migration, and delhorush, highly ornamented melismatic songs. After independence, music has developed in close interaction with music markets in Iran, India, Afghanistan, the Orient and the West. New popular genres include pop, rock, techno, hip-hop and rap.

A rich music culture, largely unanimous, modal and with a large number of shell types and rhythms, emerged before our era in the area that is today Tajikistan and Uzbekistan. With Arab conquests and the spread of Islam, the influence of the Ancient Orient followed. At the rich courts under, among other things, Mongols and Seljuks developed a rich music culture. This music culture spread across much of Asia and was of significance, among other things. for the emergence of the Chinese Tang Dynasty (618-907) classical music.

Uzbek invasion of 1500 led to a symbiosis between Tajik and Uzbek culture. From this arose around the court of the emirs in Buchara and Samarkand a highly developed soloistic dance art and classical urban music form, Shashmaqam, a mosaic of alternating vocal and instrumental parts in six different modes, performed by highly trained singers and instrumentalists with lutes (tanbur, tar, dutar), string instruments (gidjak), frame drum (dojra) and flute.

Traditionally, dancers and musicians have been recruited among socially marginalized groups, Shiites of Iranian origin and Bukharan Jews. In recent decades, most Bukharan Jews have emigrated to Tel Aviv in Israel and Queens in New York, USA. These include some of the most famous, such as the legendary dancer Malika Kalantarova (born 1950), the singers Shoista Mullodzjanova (born 1925) and Fatima Kuinova (born 1920)). For political reasons, the cosmopolitan, multi-ethnic, and multilingual Shashmaqam repertoire during the Soviet era was given two forms, one Tajik and one Uzbek. Since the 1980’s, steps have been taken to recreate a common repertoire. Since independence in 1991, both Tajikistan and Uzbekistan have tried to preserve the music form, including through new higher education music courses in Dushanbe and Tashkent.