In summer from May to September there are average maximum temperatures of around 30 ° C, but especially in August values ​​of 50 °C can be reached, the summer humidity, in the hinterland is not very high. It is a little cooler on the coast in summer, but it is also humid.

In winter it is milder with daytime temperatures of around 18 °C and cool nights (mostly above 0 ° C). The low rainfall (between 10 and 220 mm per year) falls in winter.

The water temperatures in Kuwait Bay are around 30 °C in summer and around 20 °C in winter. Occasional sandstorms can occur throughout the year, especially often in spring.

The best time to visit Kuwait is in May or October – right before or right after summer when the temperatures are less high. Between February and April, the desert is covered in sheer green and the city is adorned with flowers, so this is also a pleasant time to visit.

Kuwait is an interesting country that has a lot of different sights and attractions to offer.

For example, the Great Mosque can be seen in the capital Kuwait. The mosque was inaugurated in 1986 and can accommodate up to 10,000 believers. The Great Mosque is one of the largest mosques in the Middle East. 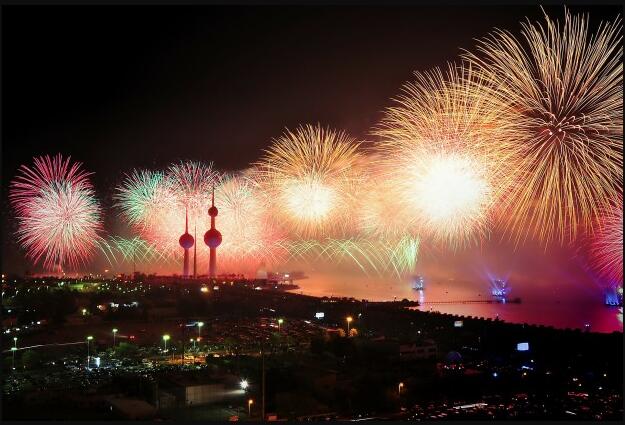 If you want to visit the mosque there are a number of things to consider. It is not accessible to the public or more precisely to tourists during prayer times. Visitors to the Grand Mosque also have to watch their clothing, especially women. With them, the head, arms and legs must be covered.

Another interesting sight in Kuwait is the old Dhau harbor. There you get an excellent insight into the traditional shipping of the country. You can see old dhows here, which are still used for fishing today. The dhows are manufactured in the nearby village of Doha. It is also worth visiting one of these workshops.

The musicals Fountains are something special. The fountain is located in the capital city of Kuwait and is one of the highlights of the country. The fountains of the fountain change color and shape. Likewise, different music is constantly played, matching the shapes and the color of the water.

The oil fields in Ahmadi are also worth seeing. Drilling takes place about 135 meters below ground to bring this raw material to daylight. If you would like to find out more about how oil is extracted, the Kuwait Oil Company demonstration room can show you everything about the oil extraction process and transportation.

Museum lovers will not miss out in Kuwait either. The Tareq Rajab Museum should not be missed. The museum was founded in 1980 by the Rajab couple. Here you can visit more than 30,000 objects from the Arab world. You can see jewelry, ceramics, stone and glass, miniatures and musical instruments, as well as various calligraphies, manuscripts and historical clothing.

Likewise, a visit to the National Museum in Kuwait City is certainly interesting. Here you can learn everything about the history and culture of the country. So there is a typical Kuwaiti house to see or even an old souq, also called dhow, which is a traditional Kuwaiti ship. However, the National Museum has a few more exhibits to offer.

The Al-Qurain home in Kuwait City is also worth a detour. It tells the story of the Iraqi occupation of Kuwait in the 1990s. At that time the resistance fighters had gathered here in this house to defy the intruders. Since the house is supposed to serve as a memorial to this time, it was left in its current state. There is also a photo exhibition on this topic in one of the neighboring houses.

But the ancient sites from the time of Alexander the Great should not be missed either. The sites are located exactly on Failaka Island.

There are also special modern buildings to be seen in Kuwait. There would be z. B. the three Kuwait Towers on the coast road of the capital Kuwait. Its construction was completed in 1979 and the towers are still considered the symbol of the city. The tallest of the three towers is 187 meters high. In its dome it houses a restaurant where you can enjoy the typical national cuisine. Above all, you have a wonderful view of Kuwait City. The other two towers are 147 meters and 113 meters high.

The Tower of Liberation is also worth a visit. Like the other towers, this one is also in Kuwait City. It opened in 1996. The Liberation Tower also houses a restaurant, but is slightly larger than the tallest of the Kuwait Towers. The tower of liberation is 372 meters high.

The Self Palace in Kuwait City is an absolute must for Kuwait tourists. Until the Iraqis invaded, the Emir lived here. It was badly damaged during this war, but has been restored since 1995.

The old souq is a market in Kuwait City. Here you can get everything a Kuwaiter’s heart desires. From jewelry, perfumes, oils, spices to traditional clothing etc. everything is possible.

Most of Kuwait’s attractions are in Kuwait City. So as a little tip to tourists who want to explore the country closer: it makes perfect sense for you to start your exploration tour in Kuwait City.