Iraq had an early literary culture (see Assyria, Literature and Babylonia), Literature). Through the conquest of the Muslims, Basra and Kufa became centers, not only politically but also for Arab philology, Koran exegesis and literary science. During the Abbasid dynasty, the center of the Islamic empire, even in cultural terms, was shifted from Damascus to the new city of Baghdad. The Caliph al-Mamun was established in the town of the House of Wisdom (Bayt al-hikma), where the Greek natural and cultural writings were translated into Arabic. Cultural impulses from Persia and India also exerted a strong influence on Arab prose writers such as Ibn al-Muqaffa, al-Jahiz and al-Hariri as well as poets such as Abu Nuwas and Abu al-Atahiya. The development is reflected in “Baghdad’s history” by al-Khatib al-Baghdadi with more than 8,000 biographies of scholars and writers. Iraq has long remained a center of Arab culture in all branches of science,Arabic literature). 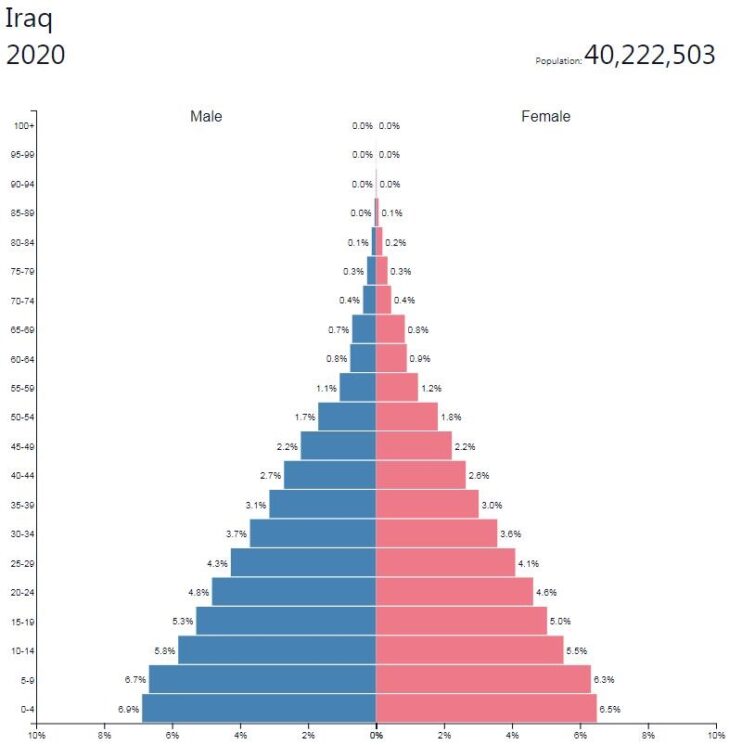 Towards the end of the 1940’s, Iraq became the scene of a poetic revolution in the Arab world. The foundation had been laid by poets during the first three decades of the 20th century. At the turn of the century, the richly embroidered form of classical poetry still dominated. A few prominent poets succeeded in giving that life by liberating their works from the ornate style of the time and seeking back to classical rigor and clarity, notably the Baghdad poets Jamil Sidqi az-Zahawi and Maruf ar-Rusafi. Their anti-colonial works included political and social development, and the simple, direct and didactic poems made Iraqi poetry famous throughout the Arab world. The revolutionary free poetry created in Iraq after World War II was of a different nature from the free verse written by Syrian-Lebanese poets in Egypt as well as the native Egyptian, where classical Arabic metrics have almost completely disappeared. Iraqi free poems were based on sounds of rhyme in classic verse dimensions, despite irregular string length and broken rhyme patterns. It also occupied classical themes, metaphors, parallelisms and repetitions. Badr Shakir as-Sayyab and Nazik al-Malaika pioneered. Their breakthrough has taken its place in the history of Arabic literature: as-Sayyab’s qasida “What is love?” (1946) and al-Malaika’s poem “Koleran” (1947). Their free poetry is influenced by, among other things. TS Eliot, Edith Sitwell, Auden and Keats. They express love for the motherland, but also pain in life and grief over social ill-treatment (some of their works can be found in Swedish translation in “Alchemy’s blue fire”, 1991). The fall of the monarchy and the establishment of a republic in some respects widened the cultural field. Among the dominant poets of recent decades are Abd al-Wahhab al-Bayyati, Sami Mahdi and Abd ar-Razzaq Abd al-Wahid. Several international poetry festivals in Iraq have been inspirational in poetic development.

The novel has played a greater role in Iraq, as in the Arab world at large, than other prose. More important novelists include Abd al-Malik Nuri, Shakir Khusbak and Abd ar-Rahman Majid ar-Rubayi, who often deal with social issues and depict realistically drawn figures. During the 1970’s, modernist, experimental and psychologically styled styles penetrated the West, bringing with them a pessimistic view of reality.

In the area of Roman art, nothing of importance happened before the 1960’s, due to high printing costs, partial illiteracy, political instability and traditional social structure. But towards the end of the 1960’s and the early 1970’s, some writers broke through with major works that artistically and committedly advocated for national independence and social reform, including Ghaib Tuma Farman, Abd ar-Razzaq al-Mutallabi, Aziz as-Sayyid Ghasim and Yasnin Husayn Ulaywi, inspired by Russian writers such as Dostoevsky, Tolstoy and Turgenyev. In Iraqi literature, linguistic minority groups also play an important role, especially Kurds (see Kurdish literature).

The first professional theater company in Iraq was founded in 1927 by Haqqi ash-Shibli, who also established a special theater department at the Baghdad Institute of Fine Arts. During the 1930’s, theater life in Iraq was rich, but Egyptian plays dominated. A few Iraqi works were erected, mainly by Muhammad Musa ash-Shabandar. In recent decades, Iraqi playwrights have raised social problems, especially Yusuf al-Ani, whose work has gained much appreciation. Since the 1960’s, the number of theater ensembles has grown sharply, and a children’s theater business has developed, among other things. by playwright Fawzi Mahdi.

In 1948, the first modern film studio opened in Baghdad, which was initially used mainly by Turkish filmmakers. Qamiran Husni’s “Said Effendi” (1955) marks the birth of the Iraqi film. In the psychological person drawing, it had certain features in common with Khalil Shawqi’s “al-Haris” (1968). Technically and artistically, the films were otherwise generally low standard.

With the Bath Party in power, the private sector weakened in favor of the state, and educated filmmakers abroad such as Qassim Hawal (born 1940; “Dia al baytai”, 1978), Sahib Haddad (born 1939; “Yawmun akher”, 1980) and Muhammmad Shukra Jamil (“Al-Mas ala al-Kubra”, 1983) appeared with productions that often had an agitatory cap against the former British colonial regime or the decadent Western world. The war against Iran and then the Kuwait War hampered the production of about 2-4 feature films and about 30 documentaries a year.

Many of today’s Iraqi filmmakers reside abroad, including Maysoon Pachachi (born 1947; “Return to the Land of Wonders”, 2004), Abbas Fahdel (“Dawn of the World”, 2008) and Usama Alshaibi (born 1969; “Nice Bombs”, 2006). Following the US invasion of Iraq in 2003, mainly American documentaries have been devoted to depicting the effects of the war on the country, for example. Michael Tucker’s “Gunner Palace” (2005), James Longley’s “Iraq in Fragments” (2006) and Errol Morris’s “Standard Operating Procedure” (2008). Several feature films, such as Ken Loach’s “Route Irish” and Paul Greengrass’s “Green Zone” (both 2010), are also played in and around the US and their allies’ military operations in Iraq in 2003 and beyond.

When Baghdad was founded in 762 during the Abbasid dynasty, the center of the then Islamic world moved east, with stronger Eastern influences in the arts as a result. Most important, however, was the design language created in the decorative decoration of the palace and in the art the temporary capital of Samarra (836-883) with wall decor in stucco in varying degrees of stylization from naturalistic plant ornaments to completely abstract ornament. The forms of Samaritan ornamentation became style-forming throughout the central Islamic area. An early visual art is preserved in murals in the Jausaq-al-Khaqani palace with dancers in solidified pose in the front oriental style. Samarra has also found glazed earthenware with relief decoration, ceramics with so-called glaze glaze and glass objects with ground decor.

During the 13th century, Mosul became the center for the production of high quality metal art, mainly bronze objects with inlaid silver and brass decorations of plant ornaments, figures and calligraphic borders. Miniature art was developed in the Baghdad school during the 13th century in a style that united Western (Byzantine) and Eastern (Chinese) traditions.

In later centuries, art was influenced partly by Persian influence and later also by Ottoman dominance. The National Museum of Baghdad has the country’s foremost collections of Islamic art.

In Basra and Kufa, in the first half of the 600’s, two of Islam’s oldest, but not preserved, mosques were constructed according to the simple Arab plan with open courtyard and a low, covered prayer room against the qibla wall (the prayer direction). The building material was probably sun-dried brick. From the earliest Islamic era (the 7th century), the desert palace is al-Ukhaidir, built in stone in the Sasanidian tradition with its extensive walls, open courtyards, ceremonial and residential rooms, and a mosque.

Following the Abbasid takeover, the Caliph al-Mansur 762 founded the new capital Baghdad, heavily fortified and with a circular city plan. Four city gates on two floors led to two main streets which crossed the city. At the intersection lay the caliph’s palace and a mosque. The shape of the city symbolized a cosmic center, and the place was considered the center of the world. Nothing is preserved today by al-Mansur Baghdad, destroyed by the Mongols in 1258.

The Caliph al-Mutasim founded 836 a new capital, Samarra, which was abandoned in 883 and is now in ruins. Two large mosques were built here; the best preserved, and one of the largest mosques ever erected, is the al-Mutawakkil mosque with its large open courtyard, an originally covered, low prayer hall and a strange, detached minaret with outer, spiral staircase. Of three large palaces, Jausaq al-Khaqani, with reconstructed murals, is the most famous.

Characteristic of Iraq are the conical dome towers with exterior muqars, so-called stalactite arches, of late Abbasid times, e.g. the tomb of Imam Dur (1085) in Samarra and Sitta Zubayda’s tomb in Baghdad (1179-1225).

Only a few buildings have been preserved in recent Baghdad architecture, including the restored Mustansiriyya mattress built in 1233 and Khan al-Mirdjan, a caravansera from 1359, both examples of Iranian tradition of brick architecture.

In recent centuries, mainly the mosque architecture has received an Iranian mark. The modern urban building is built in the Western style, in some cases recreating older, even pre-Islamic, styles.

Iraq’s role as one of the most important cultural areas of the Arab-Islamic world is also reflected in music (see Arabic music and Kurdish music), which, despite the country’s great ethnic complexity, shows a great deal of consistency regarding the basic design principles. Traditional Iraqi music is modal, unanimous and basically vocally conceived. The most widely used folk instruments are tabl (large two-fold drum), and zurna (shalma), which accompanies the chain dances, dabkha. In Baghdad, a maqam- based art music was cultivated. The traditional baghdad ensemble consisted of santur (chopping board), jawza (four-string string instrument),dumbuck (vase-shaped hand drum), daff (tambourine) and qari (vocal soloist). Through influences from Egyptian and Syrian entertainment music, around 1910, the so-called oriental ensemble was introduced with qanun (cittra), nay (strip-blown long flute), ud (lute) and various rhythmic instruments.

An effort to preserve traditional music has been part of the Iraqi regime’s cultural policy after the Second World War. In doing so, they have mainly focused on art music, which is presented as a national heritage. The range of music, however, is dominated by more or less transcultural genres, where Western instruments have prominent roles.