Early art and artifacts from the Mekong Delta show the influence of Chinese Han culture, Iran and, above all, India, especially in representations of Hindu gods.

An example from this period (ca. 860-1000) is the temple of Prah Ko from 879. Ta Keo from around the year 1000 is a fully developed Khmer temple with a high central tower, surrounded by four lower tower buildings on a staircase. Everything is made of stone and decorated with facade sculpture and growth ornaments. An exquisite example of this highly developed sculpture can also be found in the small temple of Banteay Srei, made in red sandstone in the late 800’s. Khmer art created a world of gods where Hinduism and Buddhism blend. 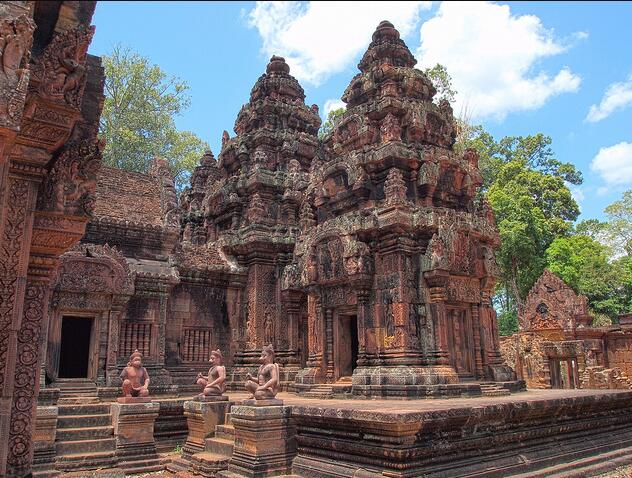 With the large temples in Angkor, the art reaches a peak in the period 1100-1200. The best known and best preserved is Angkor vat, which was erected under the Khmer king Suryavarman 2 (1113-50). The temple is erected in three ledges and reaches a height of 65 m; a central tower is surrounded by four corner towers. The buildings are set in stone, with longitudinal relief embellishments that depict scenes from Mahabarata, Ramayana and mythology around Vishnu. The reliefs give a vivid picture of the Khmer community.

During Jayavarman 7 (1181-1219), around 1200, the monumental Buddhist temple Bayon was erected in Angkor-thom. It is especially known for the colossal Buddhas that adorn the temple towers. There is an exquisite portrait of King Jayavarman 7 in the National Museum of Phnom Penh, carved in sandstone, and with Buddha’s facial features.

After 1220, the Khmer kingdom lost its innovative power, and Angkor fell into disrepair. Angkor was rediscovered by Portuguese and Spaniards in the 16th century and by Frenchmen in the mid-1800s. Since the 1850s, a great deal of research and restoration work has been carried out, continuing after the significant devastation during and after the civil war in the 1970s. 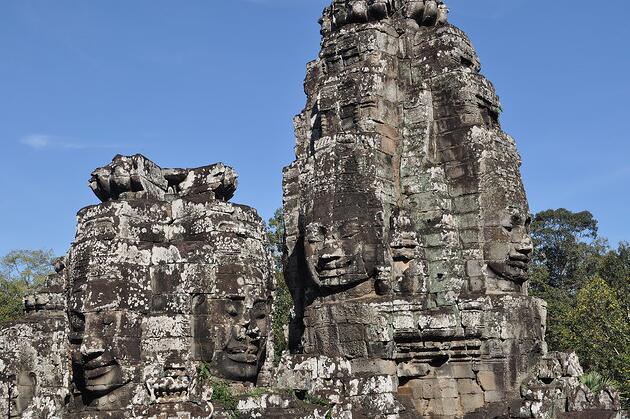 Cambodia’s music traditions are related to the music of neighboring countries Laos, Thailand and Myanmar. Orchestral ensembles (pin peat), with precisely tuned metal gongs, metallophones, xylophones, drums and obo instruments or flute, represent the older national culture. A variety of instrument types, introduced from India (harp, vina)), Malaysia (one-string fiddle), China (two-string fiddle, chopping board) and Thailand (three-string seats), have influenced folk music. There is no sharp distinction between art and folk music: village orchestras and court ensembles are essentially the same, and play in connection with shadow theater, dance, ceremonial and festivities. Both traditions are also based on oral transmission of the music. Folk songs are sometimes performed as dialogue between man and woman, with instrumental tone. 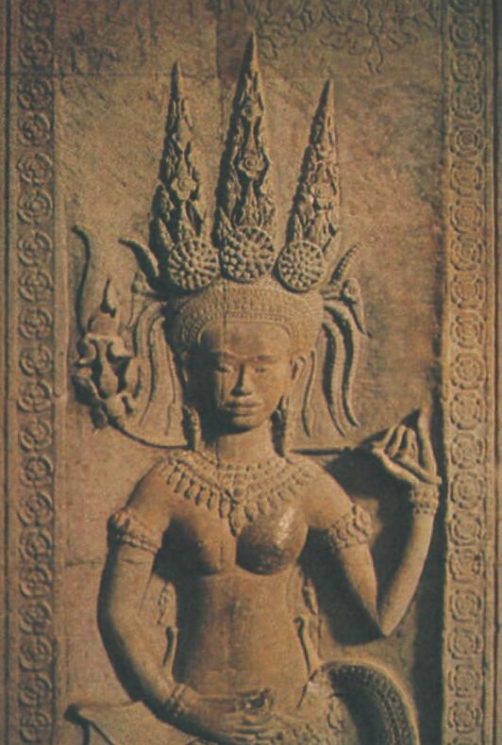 Cambodia has a long tradition of ritual dance and theater forms, with an ancient historical background as shown in records from the 7th century. What was then described were theater-like expressions based on dance, music and songs. From the 15th century both ballet tradition and shadow theater are known. This ballet tradition has in our time sought to be maintained by the Royal Ballet in Phnom Penh, and shadow theater has similarly functioned as a popular theater tradition. The National Ballet has performed a repertoire based on, among other things. the Indian epic Ramayana about the Cambodian Prince Preach Song. The dance performances were combined with a chorus that performed lyrics, originally in the Thai language and later in Cambodian. The dancers produced a register from fools to demons. It has been popular with the Shadow Theater form in our time Nang shek with dolls with sculptural appearance. An even more comical version of shadow theater is Ajang with clown-like and cabaret-like instruments.

Hiking theater with improvisation-based dialogues is played in large halls, and they are based on old legends and fairy tales and are very popular. In the 1950s, western theater forms came in and western drama was launched through the New Theater. After this came into being in 1959, the State Drama Theater was founded. This western orientation was first represented by amateur theater actors, and the repertoire initially consisted of classics such as Shakespeare, Corneille and Racine. Trends in the direction of a professional theater were particularly encouraged during the kingdom, but during the Pol Pot era, the events of theater life were largely decimated. There is now a slow reconstruction.