In the oldest literature from Cambodia, Indian traditions in Sanskrit and Pali meet as well as indigenous traditions of Khmer. The literature consists mainly of Indian art poetry which praises the ruler, in the form of stone inscriptions that date back to the 4th century AD. From these inscriptions it appears that classical Indian works in Sanskrit were known. From 611 AD there are also inscriptions on Khmer, which deal with social conditions and financial issues in connection with donations of land. 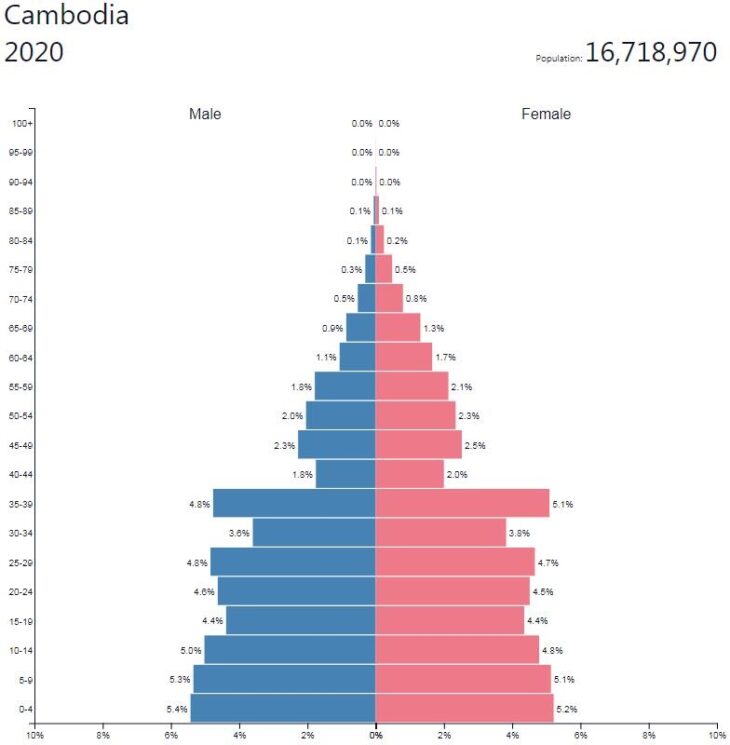 A literary production of Khmer emerged during the 17th and 18th centuries. Then came the educational poetry, the religious poetry, the fictional story and the epic poetry.

The study of poetry came in Buddhist monasteries and followed the pattern of Indian poetry in verse; it also had Indian models, such as “Arthashastra” and “Nitishastra”. It spread in the monasteries and in the homes and expressed the norms of Brahmanic culture, the confidence in the Buddhas and the popular wisdom. The religious poetry can be exemplified by a special group of inscriptions from Angkor Vat, written by laymen.

The fictional stories consist of fables, aitiological legends, popular stories about the social life of different social groups and constructive, moralizing stories. They emerged in the monasteries, were recited and sung by bards, and also used in dramas and dances. They were orally trained in simple prose. The novels were produced by professional writers, by monks, former monks and learned laymen in the monasteries or at the courts. They depicted amorous intrigues and passions instilled in a Buddhist context.

The purpose of the epic poem was to make a named, well-known hero a subject of a cult, e.g. “Ramakerti” (‘Rama’s fame’) from the 17th century. The work is based on the Hindu Sanskrit “Ramayana”, but has a local and Buddhist design. It is one of the most popular literary works even today, as the literary heritage of earlier centuries is still nurtured and passed on, especially in the monasteries.

Since Cambodia became French colony in 1863, European influence gradually increased, and new genres were introduced. The first modern novels were written in spoken language and were about ordinary modern people, e.g. the love novels Sab’s Water (1939) by Kim Hak and Sophat (1938, published 1960) by Rim Kin. Since the country became independent in 1953, other subjects were also raised, and everything from historical novels to poets was published. Also European influenced dramas and short stories as well as poetry belong to the current literature in Cambodia.

The theater art in Cambodia can be divided into popular village theater, classic court theater forms and modern, popular theater. The popular village theater follows a broad Southeast Asian tradition. Storytelling, song, music, dance and mimic work together in the performances, which can be entertaining and at the same time serve as a ritual link between the spectators and the spiritual world. The theater and dance art that has been developed in the village theater has been a significant basis for the court theater’s more well-known and refined forms of dance drama, shadow theater and mask plays.

Buddhism, Hinduism and the political ideologies of our time have greatly influenced the drama and theater of Cambodia. Domestic, popular and religious legends as well as the mythical and literary figures of neighboring countries are common dramatic motifs. Stories of Buddha’s past life, excerpts from the Indian epic “Ramayana” and depictions from the Javanese history collection about Prince Panji are frequently quoted.

Western speech drama, mainly based on French tradition, was introduced during the 20th century. Prince Norodom Sihanouk himself has written speech pieces according to Western designs. The exodus from Cambodia in recent decades has meant that some of the traditional theater art is carried on by groups living abroad.

Utensils, jewelery and sculptures from the Funan Kingdom in the Mekong Delta betray an influence from Chinese male culture, Iran and the Mediterranean, but especially from India, especially with regard to Hindu deities. There are also preserved Buddha statues in wood from Funan.

From about 500 up to the mid-800’s (pre-Angkor), a well-organized agricultural community was ruled in Cambodia under the rule of a god-king (Devaraja), an office established by the Shrivijaya Empire in Java. The temples were designed around this god king and placed on a hill as a symbol of the Meru mountain. An early example of such a temple is Prei Kouk from the 500-600’s with richly sculpted stone decoration.

An example of an early Angkor style (c. 860-1000) is the Prah Ko temple from 879, which consists of six tower cells on a plinth. Ta Keo from about 1000 shows the Khmer temple fully trained with a high central tower, surrounded by four lower tower buildings on a staircase-shaped pedestal, all made of stone and fitted with facade sculptures and plant ornaments in stone. An exquisite example of this highly driven stonework is the small temple of Banteay Srei from the late 1800’s, made of red sandstone. All these temples are located in the city of Angkor.

With Angkor Vat, the large temple complexes reached their full development under King Suryavarman II (1113 – c. 1150). The site was erected both as a tomb and a cult site for the god-king. Canals enclose an area of 1,500 m ℅ 1,300 m. The central temple rises in three ledges to a height of 65 m with a central tower, surrounded by four corner towers, connected by galleries and intersecting halls. There are also galleries around the entire facility. The preserved buildings are set in stone with long continuous relief embellishments, which depict scenes from Mahabarata, Ramayana and the mythology of Vishnu. The reliefs are made in different styles and give a vivid picture of the entire Khmer community centered around the god king. Angkor Vat burned down in 1177. Jayavarman VIIentered the monarchy in 1181 and built the next capital, Angkor Thom, with the mighty Buddhist Temple Bayon, famous for its colossal buddha heads adorning the temple towers. When the king died about 1220, the Khmer kingdom lost innovative power, and after a couple of centuries Angkor fell into disrepair. It was first rediscovered by Portuguese and Spaniards in the 16th century and by the French in the mid-1800’s. French archaeologists have since explored and restored the ancient temple towns.

The music in Cambodia belongs to the Southeast Asian music culture, characterized by pentatonics, gong ensembles and special forms of multilingualism. In Phnom Penh there was a rich music life, tied to the court, until the 1970’s.

There are three types of orchestras in the village music and in the earlier court music. Pin peat, with gong games, xylophones, oboes, flute and drum and cymbals, was used at monastic feasts, shadow theater and in the royal ballet. Mohori, with xylophones, metallophone, various stringed instruments and drum, is used for entertainment music. Phleng Khmer is considered to be the most traditional orchestra and plays, among other things, wedding music on fiddle, lute, oboe and drum.

Other prominent elements in popular music are improvised dialogue songs with accompaniment of fiddles and citra.

The popular music in Cambodia is largely made up of Cambodian tunes orchestrated with Western, electrified instruments. The song style is characterized by soft glitter sandals with ornaments. Two central styles are the slow dance music style ramvong and the somewhat lively frame kbach (similar to the Thai style luk thung).

Both Sisamouth and Sereysothea disappeared during the Communist terror of the Red Khmer, when over 1 million people were murdered. At this time, thousands of music recordings were also destroyed.

A modern funky form of the traditional Khmer dance style chantry was spread during the 1980’s and 1990’s with singer Darkie as the style’s front name.

Some of the most popular artists in today’s Cambodia are Noy Vanneth (born 1964), Meng Keo Pichenda (born 1974), Preap Sovath (born 1975) and Chhet Sovan Panya (born 1986), where the style direction can be seen moving towards a more western-influenced pop.

A popular form of distribution for modern music is videotape with karaoke.

The dance was an early part of Cambodia’s culture. Angkor was built and became the center of worship of Shiva, Vishnu and Buddha. Reliefs and inscriptions testify to the role of sacred dance in the cult and the amount of dancers associated with the temples. When the Thai people conquered Angkor in 1431, the victories brought dancers and musicians as a change of war, thus making Cambodia’s dance art a role model for the Thai.

The king of Cambodia held a court ballet, smaller ensembles were found in other palaces, and out in the villages dance dramas were performed in a more rustic form. King Ang Duong (1796-1859) breathed life into the court ballet, and in 1906 King Sisowath showed off his court dancers in France, as Auguste Rodin documented in a suite of famous sketches.

King, then Prince, Norodom Sihanouk gave the court ballet another renaissance; during his regime, he danced at ceremonies and parties and toured in Asia, Europe and the United States. When Sihanouk was overthrown, the court ballet was obliterated.