Since 1984, Brunei has been an independent Sultanate with Islam as a state religion. The constitution is from 1959, with the most recent change in 2004. The Sultan is assisted by four councils, the religious council, a judicial council (privy council), the council of ministers and the council of succession. A 21-member legislative council met in 2004 for the first time since 1984. The Council presented proposals for a number of constitutional amendments, including: extending the council to 45 members. This proposal was not approved by the Sultan, who instead dissolved the council and convened a new legislative council of 29 members in 2005. This latter council met in 2006 and 2007, but for the time being (autumn 2008) without any new constitutional proposals.

In practice the rule of the Sultan is very personal; he appoints himself prime minister and government, which in turn is only responsible to him. The state government is relatively stable, but the country is also characterized by ethnic tensions, dissatisfaction with the sultan’s politics and sometimes tensions with the outside world.

The judiciary comprises magistrate courts at the lowest level, further courts at an intermediate level and at the upper level a Supreme Court. For religious purposes, it is its own Islamic courts, with the religious council as an appeal court.

Brunei has volunteer military service. The total force for Brunei’s armed forces is 7200 active personnel, with a reserve of 700 personnel and about 500 semi-military forces (2018, IISS). 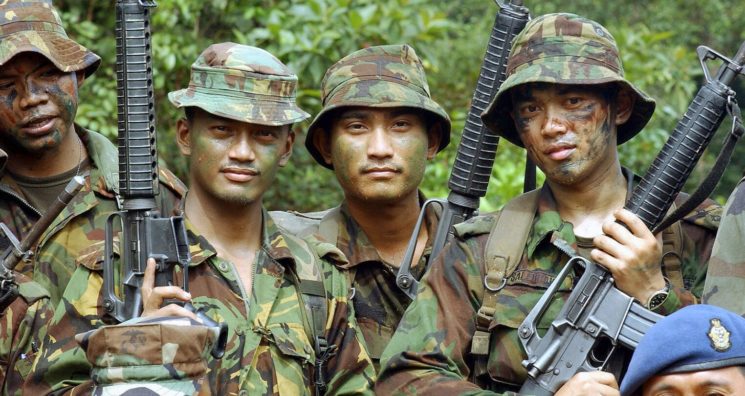 The Army has a workforce of 4900 active personnel. Material includes 20 light tanks of a Scorpion and 45 armored personnel.

The Air Force has a personnel force of 1100 active personnel. Materials include one maritime patrol aircraft, four training aircraft and 21 helicopters.

The Navy has a workforce of around 1,200 active personnel. The fleet comprises nine patrol vessels and four landings.

Brunei participated in 2018 in the UN operation in Lebanon (UNIFIL) with 30 personnel, and had nine personnel in the Philippines (IMT).