Mao Zedong (December 26, 1893 – September 9, 1976) was a Chinese Communist leader, dictator, and revolutionary. He participated in the founding of the Chinese Communist Party in 1921 in Shanghai, based on the Soviet model.

He ruled China with an iron fist until his death in 1976. 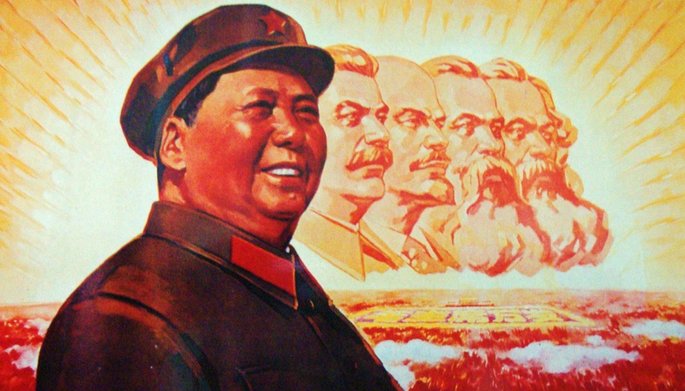 Official propaganda showed Mao as a follower of Stalin, Lenin, Marx and Engels

Mao Zedong was born in Shaoshan Village, Hunan Province, China, on November 26, 1893. The son of peasants studied until he was 13 years old, when he worked in the field.

He went back to school at a preparatory school for teaching in Changsha. He joined the nationalist army where he served for a short time, returning to Changsha, being appointed principal of a primary school.

The China that throughout the nineteenth century was exploited by the imperialist powers lived a political and economic chaos. In 1912, the Republic was proclaimed, which can do almost nothing before the powers that occupied the country.

In 1919, the students organized the “Fourth of May,” a movement that took three thousand students to the streets of Beijing, protesting against the government’s acceptance of Japan’s demands on China from the Versailles Treaty.

Students were supported by various sectors that promoted strikes and demonstrations.

In 1921, it was founded, with the participation of Mao Zedong, the Chinese Communist Party (CCP) who allied with the Nationalist Party (Kuomintang) led by Sun Yat-sen.

In 1925, upon Sun’s death, he took over Chiang Kai-shek, who broke with the Communists and undertook violent repression against the party.

In 1926, Mao Tse-Tung joins the revolutionary military and his Red Army, led by General Chu The. Together they retire to Kiangsi inland to organize their support bases.

In 1931, along with Chu Teh and Chou Em-lai, Mao Zedong proclaims the Socialist Republic of China .

However, in 1934, the nationalists organized a major military campaign to crush the communists.

Fleeing government troops, some 100,000 men – “the People’s Liberation Army ” led by Mao, walk ten thousand kilometers on foot – The Long March, which bypassed a number of obstacles, defending itself from Chiang’s attacks.

Faced with the insistent Japanese advance, Mao Zedong proposed the organization of a new single front – Nationalists and the CCP, which led to an agreement, concluded in 1937, which gave the CCP control of part of the Chinese army.

However, after the Second World War (1939-1945), the civil war resumed with the progressive victory of the communists. On October 1, 1949, the People’s Republic of China was proclaimed.

After an initial stage of administrative organization and reconstruction began structural reforms for integral socialization.

In the transition phase (1949-1953), the regime was mixed, capitalist forms continued, alongside progressive socialization.

In 1954, with the creation of the National People’s Congress, Mao Zedong becomes president of China .

In 1958, he began the 2nd Five Year Plan, which he called the Great Leap Forward, which also failed to deliver the expected results.

This Revolution represented an attempt to impose on its opponents within the party, who wanted a more moderate political line. Accused of being a traitor, President Lau Shao-chi is ousted and arrested.

With the support of the Red Guards, recruited from students and peasants, he undertook the doctrinal reeducation of both the masses and the institutions.

To them, Mao was the “Great Helmsman”. Many of those deemed unfit for the new order were arrested and humiliated, several eventually killed.

Any opposition was eliminated. In 1969, Mao Zedong returned to the presidency held until his death in Beijing on September 9, 1976.