Cambodia’s coastline on the Gulf of Thailand has a length of 435 kilometers and is very indented. Off the coast there are several islands. The largest island is 100 square kilometers of Koh Kong, 22 kilometers south of the city of the same name on the mainland. The narrow coastal plain is broken by Chŭor Phnum Dâmrei, the “Elephant Mountains”, which extend down to the coast (at Kampot). The central part of the country forms a large plain (“the Cambodian plain”), around the Mekong River (Khmer Mekôngk) and Lake Tonlé-Sap, originally a bay closed from the sea by the Mekong delta.

In June, the Mekong rises to 12–15 meters, and the water then flows into the sea and floods the country. During the dry season, the water flows into the Mekong from Tonlé Sap, which alternates between 2,700 square kilometers and 16,000 square kilometers in area. The plains cover about three-quarters of the entire country’s area, and are bordered by a number of mountain ranges: Chuŏr Phnum Dagrêk on the border with Thailand, Chuŏr Phnum Krâvanh, the ” Cardamom Mountains “, in the west and the plateau landscapes on the border with Vietnam in the east. The mountain ranges are on average between 750 and 900 meters high. The highest is Phnum Aoral, 1813 meters above sea level, in the Cardamom Mountains. This is the highest point in the country. 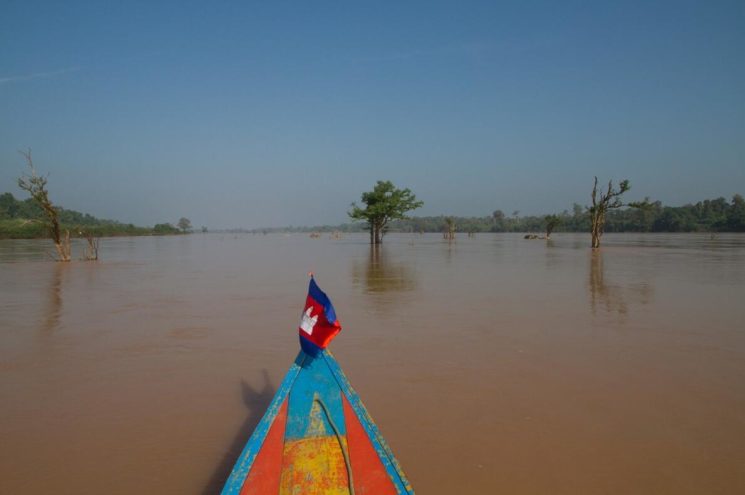 About. 75% of Cambodia was covered by forests until the mid-1900s, but uncontrolled logging has significantly reduced the forest area, see Cambodia (Forestry). In the central plain, which is also the most important agricultural district, savanna grows where the grass reaches a height of over 2 m. In the eastern highlands deciduous forests and grass plains dominate.

In the northern mountainous areas evergreen deciduous forest grows, with trees that can grow 30-40 m high and a lush bottom vegetation of vines, palm trees, bamboo, shrubs and herbs. In the south-western highlands, the pine grove grows on the highest mountains, while dense rainforest clears the hillsides. Along the coast there are tropical rainforests and mangrove forests, which are partly impervious.

War and modern forestry have decimated the population of both most large mammals and numerous smaller species that depend on the forest environment in Cambodia. Wildlife is richest in the Bokor, Ream, Kirirom and Virachay National Parks. The mammalian fauna includes 212 species. Indian elephant is rare, the same goes for banteng, gaur and cow peref and wild boar. Water buffalo is no longer in the wild. 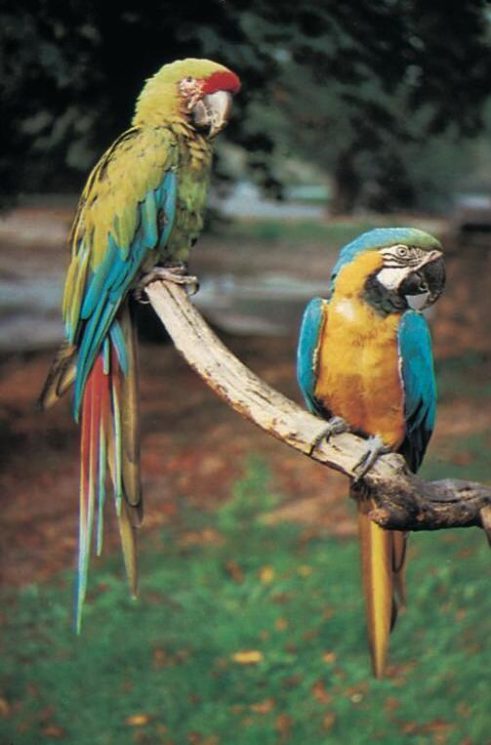 Parrots. Soldier from Central America and Blue from South America.

Many cats are endangered by hunting and habitat destruction: tigers, leopards, lions, asia and catfish. The dogs are represented by the golden jackal and flock living dholhunder, bears through Family smallest member – sun bear. Deer such as mint and sambar, porcupine and shellfish are still quite common.

240 reptiles include, among other things, crocodiles, warts and snakes. Russels viper, cobras and Krait is dreaded poisonous snakes.

Lake Tonlé-Sap has 850 species of fish.