The Philippines is a developing country with a free market economy. However, economic developments have been very uneven. While the Philippines in the 1950s and 1960s was regarded as the most developed country in East and Southeast Asia after Japan, in the first part of the 1990s, the country was considered an industrial backbone. In the 1970s and 1980s, differences between the richest and the poorer increased much faster than in neighboring countries, and the problem of poverty has become one of the most serious in Southeast and East Asia.

About 20 percent of the population lives below the poverty line. In the southern part of the country this proportion is up to 75 per cent in several places. Poverty is most prevalent in rural areas

Agriculture is hampered by uneven land distribution, poor irrigation systems, soil erosion and erosion, and difficult distribution to markets. Attempts at land reform have had only limited effect. The increase in food production is lower than the population growth. Food shortages have led to higher prices, and residents spend a greater share of their income on food than in any other Southeast and East Asian country with a free market economy. 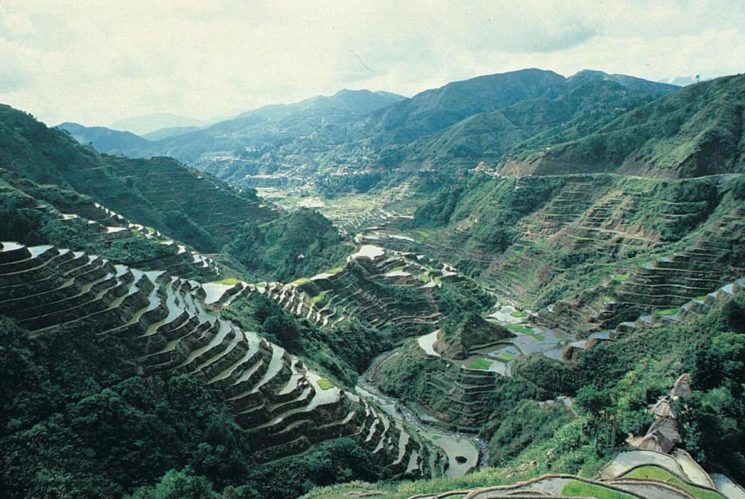 Philippines. Rice is an important agricultural product in the Philippines, and in many places, including Luzon, the rice is grown on terraced rice fields in fairly steep terrain.

The most important product is rice, which is also the main ingredient in the diet. The development of new rice species at the International Rice Research Institute (IRRI) at Los Bafios has not made the Philippines self-sufficient with rice. The main rice area is Central Plain in central Luzon north of Manila. Other important rice areas are the Cagayan Valley in northern Luzon, the island of Panay and the Cotabato Valley in Mindanao. Otherwise, corn and manioc are grown for domestic consumption. The main products for export are coconuts, sugar cane, bananas, pineapple, tobacco and orchids. Of the coconuts, copra and coconut fat are produced. The cultivation of sugar cane takes place on large plantations, and 60 per cent of the production takes place on the island of Negros. However, sugar production varies greatly with world market prices, and in some years with low prices, the soil has been completely broke. Banana and pineapple are grown on industrial plantations in southern Mindanao. Abaca (manila hemp) is produced from the banana plant.

The most important livestock are pigs, water buffaloes, cattle, goats, poultry and ducks. Cattle farming is little developed. The water buffaloes function most like working animals in rural areas.

The forest was one of the Philippines’ most important natural resources, and included wood species such as mahogany and cedar. Strong downsizing has left less than ten percent of the original forest. The authorities’ tree planting campaigns have not been successful. Occasionally, timber bans have been banned to try to prevent logging. Illegal harvesting and sweat farming in a nature that is under intense pressure due to a rapidly growing population is a serious problem. Since 2015, however, there has been some increase in the country’s forest area, mainly as a result of increased control activities aimed at preventing illegal logging. 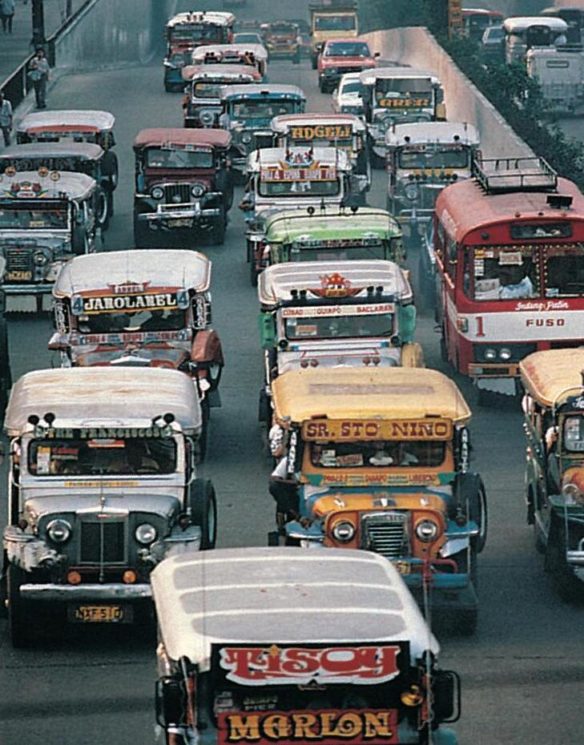 What characterizes the traffic picture in the Philippines are the many “jeepneys”, colorful jeeps used as taxis.

According to FAO, the Philippines is the world’s eighth largest fishing nation with a total production of 4.7 million tonnes (2017). Production is distributed with approximately three equal parts on commercial catch for sale, catch for own household organized by the village communities, and aquaculture. The most extensive aquaculture activities are aquaculture facilities for fish and the cultivation of seaweed and kelp. The aquaculture industry accounts for 47 per cent of total production. Fish and marine products are an important component of the diet. The country has rich fishing grounds. However, destructive fishing methods such as the use of dynamite, electricity, fine-mesh nets and large trawlers have made several of the fields almost fishy. The Philippines is therefore not self-sufficient with fish products. 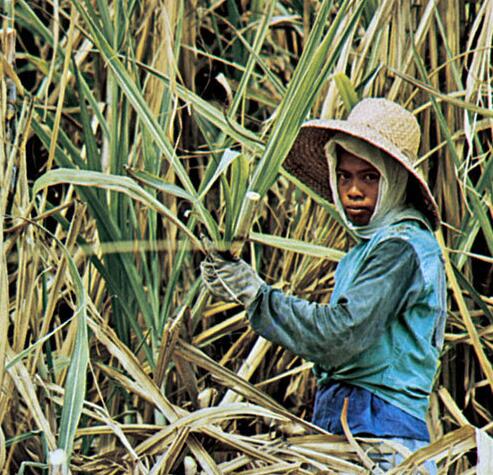 Industry and other secondary industries (construction, mining and power supply) contribute 30.6 per cent of the country’s GDP and employ 18.3 per cent of the working population (2017).

Industrialization is limited both in scope and to specific sectors. However, industrialization has longer traditions in the Philippines than in neighboring countries. Even before World War II, a free trade agreement with the United States contributed to the growth of land-based industry. After the war, industrialization can be divided into three stages. The first lasted from the 1950s until 1972, when President Ferdinand Marcos declared the state of emergency. This phase was characterized by high industrialization, aided by state protection measures (import substitution) and led by a steadily growing and independent bourgeoisie.

The second phase, which lasted from 1972 to 1986, was characterized by authoritarian rule under President Marcos focusing on export-oriented industry. During this period, a new economic elite emerged with close ties to Marcos, who displaced the old, but independent, elite. A combination of debt crisis, political crises and difficulties in maintaining and expanding transport in the 1980s weakened the economy in general and industry in particular. Many companies experienced major problems during this period, at the same time as the World Bank and the International Monetary Fund (IMF) imposed a burdensome restructuring program. In fact, the country was de-industrialized in the period 1980-1992, when the secondary industries declined by 0.2 percent per year on an economic scale.

The third phase began with the fall of the Marcos regime in 1986, and is characterized by democratically elected government with liberalization of the economy and (under Ramos) privatization of state-owned enterprises. The old economic elite again became visible and resumed much of its former leadership role. In the 1990s, a new type of industrial upper class emerged as well, including ethnic Chinese from the regions outside Manila.

The largest industrial sectors by economic value are the production of semiconductor systems and other electronic components (including telecommunications equipment and various types of office equipment) produced for export, as well as petroleum products and chemical products. In terms of the number of enterprises and the number of employees, however, the textile industry, which produces both for export and the local market, is the largest industrial sector. Other important industrial sectors are the production of plastic products and the production of food and beverages (processing of meat products, fish products, fruits and vegetables). Most of the industry is concentrated in central Luzon (Manila area), where the road network is best developed. Especially in the province of Cavite south of Manila, several export-oriented industrial parks have been established.Cebu grew up as a new industrial center in the 1990s. With the exception of some industry in the Davao region of Mindanao, there is only insignificant industry in the rest of the Philippines.

The most important mineral product is copper, but also gold, silver, nickel and some iron ore are extracted. Gold is mined at Luzon (Bargio and Camarines Sur) as well as at Masbate. Copper extraction has taken place in several places at Luzon as well as at Cebu, but is in decline. The largest deposits of nickel are on the island of Nonoc northeast of Mindanao. The country’s largest non-metallic mineral resource is coal, lime, marble (on Romblon), silica, sulfur, asbestos, carbon, plaster and salt. Test drilling for oil has only been partially successful. A field estimated to contain 100 million barrels of recoverable oil as well as natural gas has been discovered off the island of Palawan. A gas pipeline from the offshore field Malampaya, 65 kilometers northwest of Palawan, was completed in 2001 to supply three gas power plants at Luzon. Luzon and Cebu also have gas reserves. Guano (bat fertilizer) is extracted in caves at Mindanao, Luzon, Palawan and Cebu.

Philippine thermal power plants have long been dependent on imported petroleum products, but after 2001 it has become increasingly possible to utilize their own reserves of natural gas, after major development projects were completed. Coal consumption has also risen sharply in recent years. Hydropower and geothermal energy production has changed little in the last 15 years, despite the fact that geothermal energy represents the largest development potential of domestic energy sources. A major nuclear power plant on the Bataan Peninsula west of Manila was completed in 1985, but was not put into operation due to lack of security.

Households use electricity, kerosene, gas, wood, charcoal or biomass. The vast majority of households depend on more than one energy source. The electricity is supplied either by electricity plants or from the cooperatives of the village communities, but to some extent it is also drained from neighbors or batteries. An increasing part of the country has been electrified in recent years. Nevertheless, in 2017, around 10 per cent of households still did not have access to electricity (nor batteries). Paraffin and gas are mainly purchased from a retailer, while biomass is to some extent extracted from sugar cane and coconut products.

In 2015, tourism accounted for 10.6 per cent of the country’s GDP. In 2017, 7.1 million foreign tourists visited the Philippines. 62 percent of tourists came from South Korea, China, the United States and Japan.

The authorities launched a program in 1974 to encourage Filipino workers to take temporary work abroad. The purpose was partly to alleviate the high unemployment rate and partly to increase foreign currency earnings. The return of currency to the family home quickly became the country’s most important source of income for foreign exchange. According to the Philippine Statistics Office, in 2018, 2.3 million Filipinos worked abroad. Although such long-term absences of family members have significant noticeable social consequences in a population where families are traditionally very close to each other emotionally, it has given the affected families a clear financial boost over the Philippines average.

The five main export markets are:

The most important export products are electronic components, machinery, clothing and textile products, car parts, coconut oil, rubber, bananas, as well as finished products that are assembled together in mounting factories for export with parts imported from abroad.

The five main markets for Philippines imports are:

Transport is mainly based on ships between the islands and buses on the islands. The country has 216 387 kilometers of roads, of which 61 093 kilometers with a fixed tire (2014). A special feature is the widespread use of “jeepneys” (extended jeeps) in passenger traffic in cities and towns, as well as in rural areas with roads that are harmless to buses. The only railway line that is still operational goes from Manila to Naga on southern Luzon. The merchant fleet consists of 1615 registered vessels totaling 6 million gross tonnes. Main ports are Manila and Cebu, Iloilo, Cagayan de Oro, Zamboanga, General Santos, Polloc and Davao. The now privatized Philippine Airlines (PAL) had a long monopoly on air traffic, but has faced competition from smaller companies. Manila and Cebu are the two most important international airports. Davao and Zamboanga have air connections with Sulawesi and Borneo.