The dance and song helped Georgia hold on to its ancient culture after Tsar Russia incorporated the country in the early 1800s. Folk dances are influenced both from the eastern southeast as well as from the ancient Byzantine Empire in the west. While the women’s dance is calm and fluid, the men’s dance is fast and virile with high jumps and twists. In the latter half of the 19th century, professional ballet ensembles from Moscow and St. Petersburg visited the capital Tbilisi, and in 1896 the city’s opera was opened and associated with a small ballet company of 12 dancers. Prima ballerina was Italian-born Maria Petrini. She had her own school for many years and became very important to classical ballet in Georgia. The school officially became the opera’s ballet school in 1921. 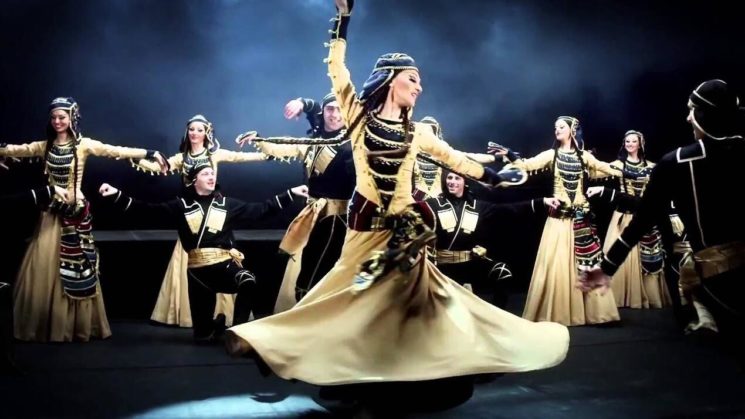 Many well-known Russian dancers from St. Petersburg, such as the couple Fokine and Fokina, Yekaterina Geltzer and the great Mathilda Kschessinska visited Tbilisi before the revolution, and the company soon expanded to close to 40 members. The well-known works of the imperial ballet were on the repertoire, albeit in limited form. Choreographer Tamara Vakhvakhisvili created the first ballets with national subjects such as. Iranian Pantomime (1914), Msetamze (1926) and Chandzari (1930). The then well-known dancer and choreographer Mikhail Mordkin, who became head of the Bolshoi Ballet in 1917, led the company in the years 1920-22. The opera was renamed the Paliashvili Theater and performed the usual works such as Giselle, Swan Lake, The Firebird, The Red Poppy, etc.

One of the Soviet Union’s greatest dance artists, Vakhtang Chaboukiani, was born in Tbilisi in 1910. In 1929 he joined the Kirov Ballet and soon became the leading male dancer in the Soviet Union. In the latter half of the 1930s he choreographed his first ballets, before returning in 1941 to Tbilisi as head, dancer and choreographer at the national ballet until his departure in 1972. Chaboukiani was to be of great importance for the development of the ballet in Georgia. One of his best-known works in which he himself danced the title role was Othello from 1957, which was filmed three years later with great success. The company visited Vienna in 1958 and Paris in 1966. His successor as manager was Georgy Alexidze, dancer at the Tbilisi Ballet and a student of A. Messerer at the Bolshoi Ballet. He choreographed a number of works, Berikoaba for music by Kvernadse in 1973 and Medea for music by Gabichvadze in 1978. Another great dancer who for a time was the head of the Georgian national ballet is Mikhail Lavrosky, son of the famous Russian choreographer Leonid Lavrosky. He was named artistic director in 1983 and choreographed in 1985 the ballet Porgy and Bess .

Georgia’s new status as an independent state and subsequent civil war caused the opera to be temporarily shut down, and several of the ballet company dancers applied abroad. Among these are former prime ballerina, educator Natalia Papinashvili. The world-renowned Bolshoy dancer Nina Ananiashvili also hails from Georgia and received her undergraduate education at the state ballet school in Tbilisi. The series of guest games in the home country with her own tour companion Nina Ananiashvili and the Stars of the Bolshoi has gained great cultural significance. In the period 1993–2002 she was a regular guest soloist at the Norwegian National Ballet.

But the dance survives in Georgia. The former Georgian state ensemble continues to delight the spectators with their incredible folk dances performed with a joy of dance that defeats anyone who sees them.