Political parties were banned in Bhutan until mid-2007. The same year two parties were registered: Peoples Democratic Party and Bhutan Peace and Proseperity Party. These were the only parties to the country’s first democratic elections in 2007 and 2008. In addition, there are a number of less unregistered political parties. 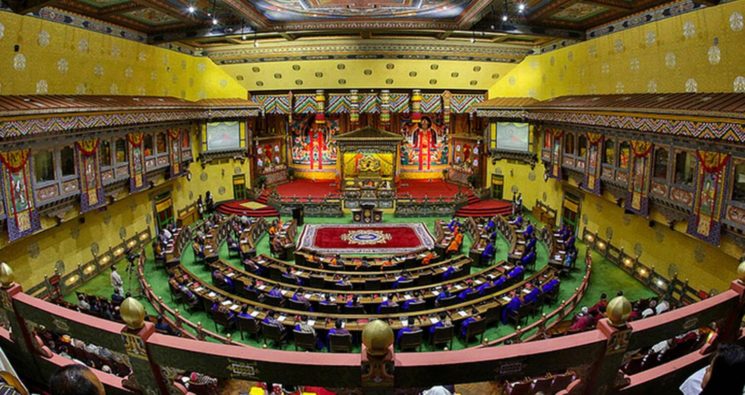 The head of state, the king (Druk Gyalpo), must be the descendant of the first king (the present great-great-grandfather, who came on the throne in 1907), and he must hand over the throne to his successor when he turns 65. The king convenes the parliament, and he appoints the prime minister, the country’s religious leader (Je Khenpo) and chief judges, the chiefs of the defense force and some senior officials on the recommendation of the government or other advisory bodies.

The legislative power resides with a two-chamber parliament, Chitshog, where the upper chamber is a national council, Gyelyong Tshogde, with 25 members without party affiliation, 20 of whom are elected in individual circles and 5 are appointed by the king for a five-year term. The National Council participates in the legislative process, much in the same way that the Lagting previously did in Norway.

The lower chamber of parliament, the National Assembly (Gyelyong Tshogdu), can have up to 55 members (47 after the 2008 election), elected on party lists in direct elections in individual constituencies for five years. Political parties are allowed, but in elections to the National Assembly, only the two parties that get the most votes in a first round of elections are allowed to take part in the second round and thus fight for seats in the Assembly. The party that gets the most votes in this election round automatically gets the governing power. In the March 2008 elections (which took place at one time, because only two parties made lists), Bhutan’s peace and prosperity party received 67 percent of the vote and 45 of the 47 seats in the National Assembly.

Nepali backgrounds, concentrated in the south of the country, have formed opposition parties in exile (Nepal). The conflict between the southern districts and the rest of the country is affecting the policy and contributes to some instability. Welfare policy is little developed.

Administratively, Bhutan is divided into 20 districts (dzongkhag). Seven of the districts are subdivided, and at the lowest level there are groups (gewog) of villages.

In the new constitution, the judiciary is made up of courts in three instances: Local district courts judge in the first instance, and judges from this can be appealed to an appeals court and on to the country’s supreme court. The king has the opportunity to grant amnesty or reduce penalties.

Bhutan gained diplomatic relations with Norway and several other European countries in 1986. NORAD has supported several projects, and the Norwegian hydropower industry has been awarded a number of contracts. The Norwegian Santal Mission (now Normisjon ) has operated two hospitals with special emphasis on the treatment of lepers.

Bhutan’s military service is based on a mix of conscription and volunteerism. Varying military training from three weeks to three months is given depending on the level of education. Bhutan’s defense consists of an army estimated at about 7,000 active personnel. The country’s defense interests are largely safeguarded by India.