Georgian arts and crafts have long traditions. Discoveries of pottery and metal jewelry from around the second millennium BC proves that, and metalwork in particular became very important. From around 300 AD came into the country under Byzantine influence. The art nevertheless shows a number of national features, which distinguish it from neighboring Armenia.

In the Middle Ages, fine works were made in silver and enamel, as well as book covers, crucifixes and icons. The book painting is Byzantine inspired but has a more linear style. Stone reliefs on church facades are also common. 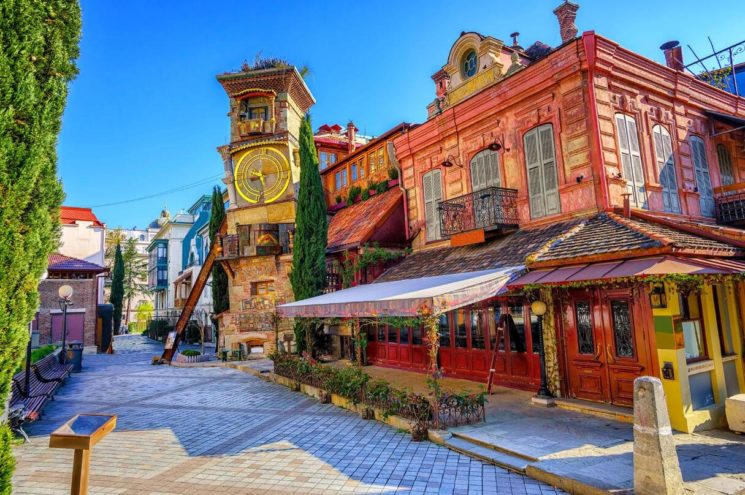 It was not until the 19th century that a modern painting was developed. The founder of modern Georgian painting is Giorgi Gabashvili (1862-1936).

The earliest architecture in Georgia shows the influence of Hellenism. The church building from around 400 AD shows kinship with both Byzantine and Armenian building customs, they often have cruciform floor plans and a high dome. Many of the churches are decorated with fine stone reliefs.

Of older housing construction, there are special examples, among others. the carved caves of Vardzia or densely populated mountain villages with high defense towers. An older type of dwelling is darbazi, it has a pyramid-shaped ceiling supported by a centrally placed pillar in the middle. In Soviet times, no architecture of national significance was created.

The Rustaveli State Theater was founded in 1922 by Constantine Mardjanichvili (1872-1933). His background was in the Tsarist Russia of which Georgia was a part, and he had worked in several parts of the empire in addition to being a director and actor, among others. in Tbilisi in Georgia itself. This theater and its founder was the beginning of a separate Georgian theater. The Rustaveli Theater was later led by a.k.a. Akhmeteli 1926–36, and key actors of his time were Sergio Sakariadse and Veriko Andsjaparaidse. Of later central Georgian directors may be mentioned Dmitri Aleksidse, who graduated from Moscow and was the director of the Rustaveli Theater. Of the younger guard, Robiko Stutura is especially important. He was the director of the legendary Rustaveli set-up of Brecht’s Good Man from Sezuanin 1969 and the Caucasian critique in 1975. The Rustaveli Theater has been touring in Germany and also plays in Moscow from time to time.